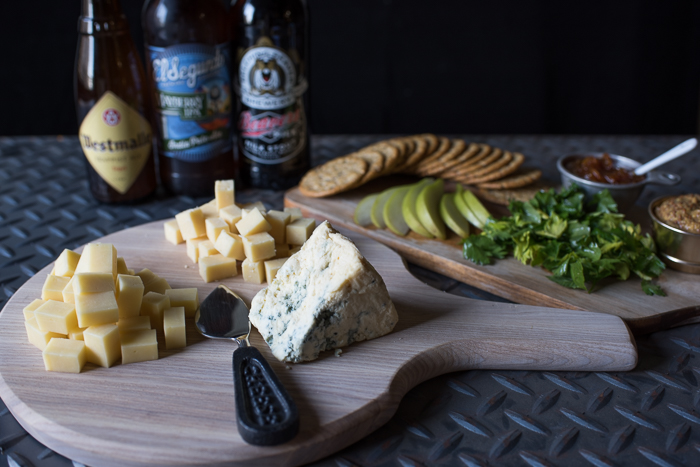 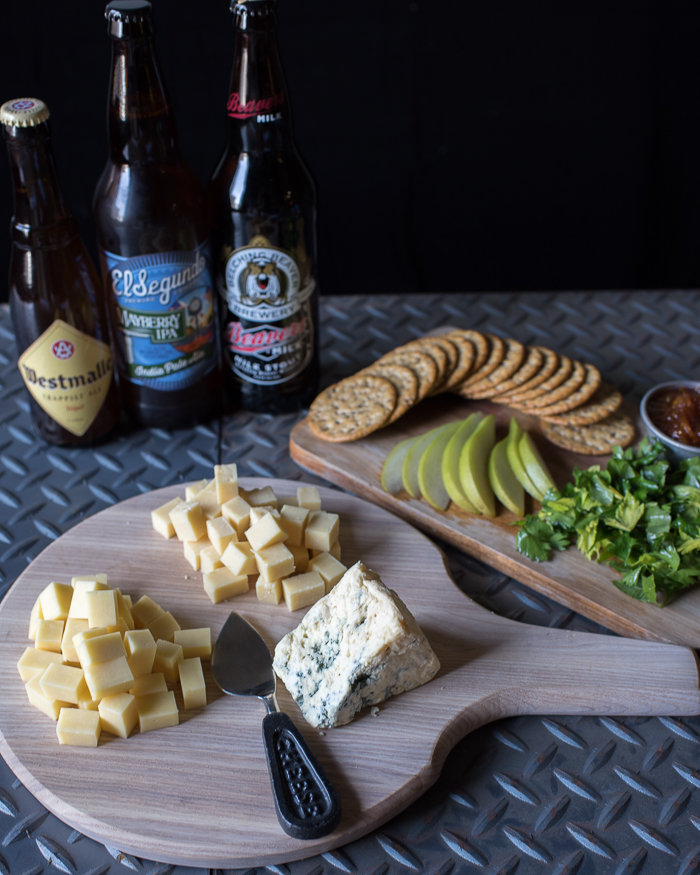 If you’re planning on having a party this St. Patrick’s Day, why not make it a potluck? For this post, I’ve teamed up with some of my local Inland Empire Food Bloggers, and the virtuosos of Irish Cheese and Butter themselves, Kerrygold to make that happen. The best part? We’re giving away a huge basket of Kerrygold products worth $175 so you and your friends can have a Kerrygold potluck of your own! 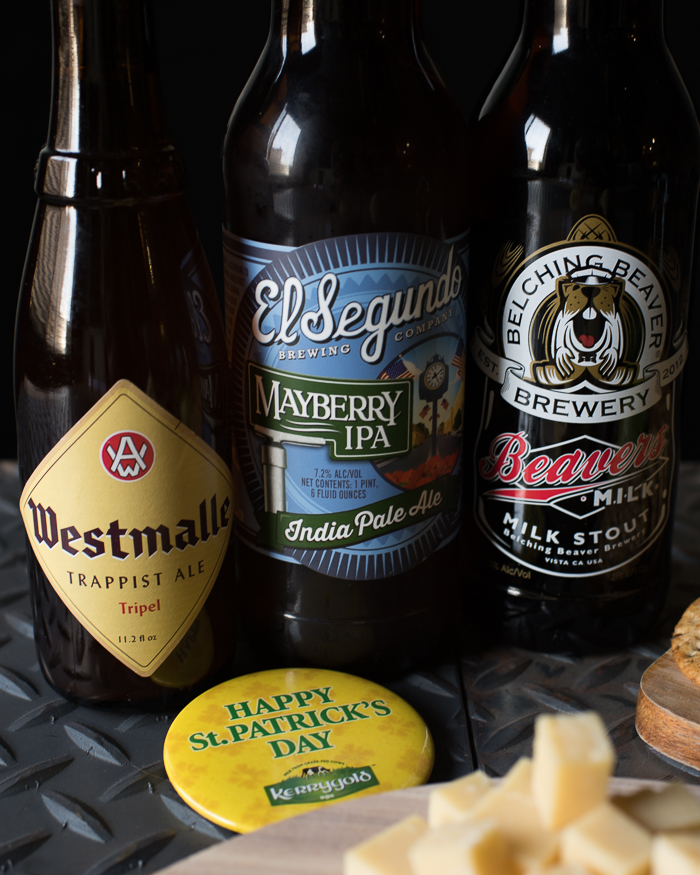 I’ve been intrigued lately by beer and cheese pairings, and being a craft beer lover, I decided to pair some of my favorite brews with the goodness of Kerrygold.

When you’re building your cheese plate, don’t sweat it too much, it’s supposed to be fun! A general rule of thumb is to pair the strength of the cheese to the strength of the beer. For instance, if you pair a super sharp cheddar with a pilsner, the sharp cheddar may blow the pilsner’s subtle flavors out of the water. For a pilsner, you may want a more subtle cheese like a mozzarella. 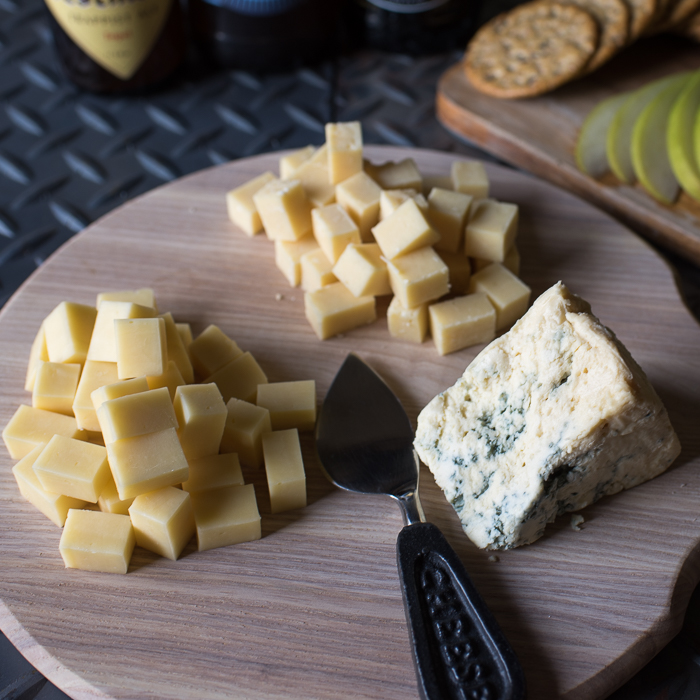 The first pairing going clockwise from left is Kerrygold’s Aged Cheddar with Westmalle’s Belgian Tripel. While this beer is a big beer in terms of alcohol, it’s effervescent, bubbly and light, yet strong enough to be paired with the creaminess and tartness of the Aged Cheddar. The alcohol of the Belgian Tripel cuts through the fattyness and creaminess of this cheese.

Other Belgian beers you could pair with this cheese are: 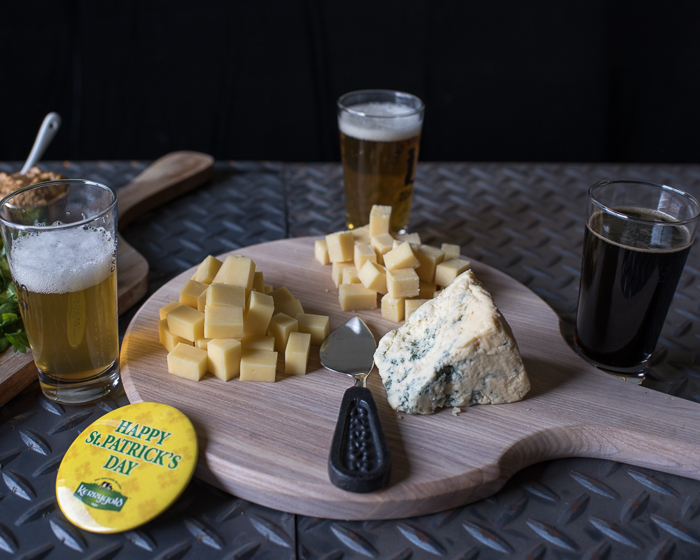 Second on the list is Kerrygold’s Vintage Dubliner paired with El Segundo Brewing Company’s Mayberry IPA. The Vintage Dubliner was a harder cheese, almost crumbly, with an intense flavor ranging from nutty to sharp to sweet, and in my opinion was more intense than the Aged Cheddar, which is why it’s second on the plate. When constructing a cheese plate, have the milder cheeses first, then graduate to the more intesne cheeses. The Mayberry IPA is a classic West Coast IPA, with tons of bitter hops on the tongue, accompanied by super floral hop aromas on the nose. The cheese really brought out the floral notes in the beer, and the beer acted as a palate refresher, giving you a clean slate to enjoy the tangy sweet Dubliner again and again!

Other IPA’s you could pair this cheese with: 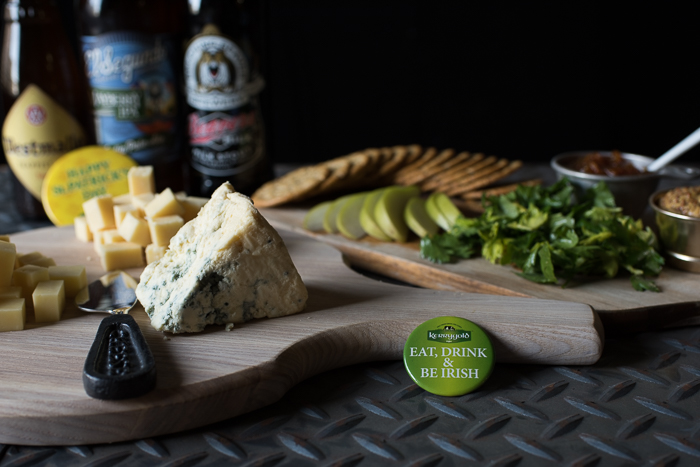 We’ve made it to the last stop on our beer/cheese journey with the mother load – Kerrygold’s Cashel Blue, that is crafted from the milk of grass-fed cows at the Grubb Family Farm. This cheese is to die for on it’s own with it’s rich, creamy, full flavor, and tang like no other. I decided to pair this with Belching Beaver Brewing’s Beavers Milk, a milk stout. The cheese really brought out even more sweetness in this silky brew, which I loved, and they really complimented each other well!

Other Stouts you could pair this cheese with: 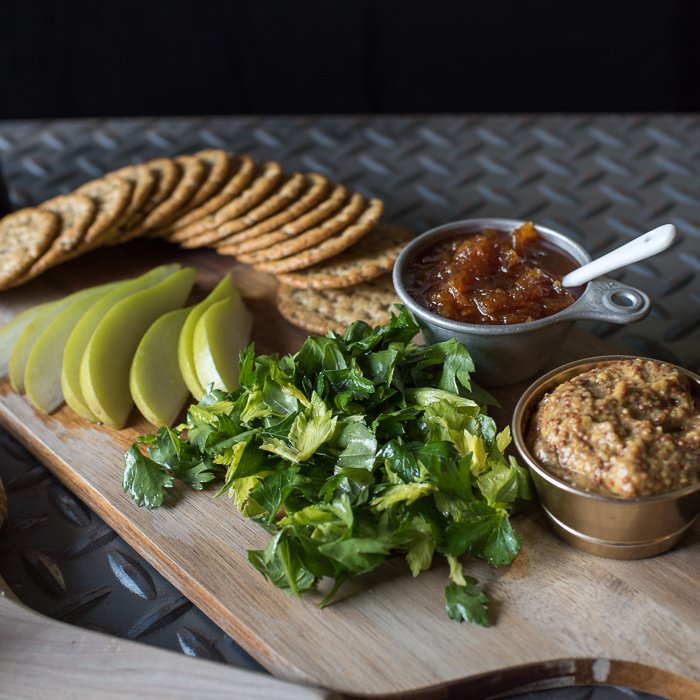 In addition to offering cheeses and beers, it’s always nice to offer some other little delicacies to allow your guests to cleanse their palate’s in-between the different cheeses and beers. It’s nice to offer a cool little cracker, and I’ve put out some whole grain mustard, some spiced mango chutney, some sliced fresh pears, and a small little herb salad composed of celery leaves, torn basil, and parsley dressed with a tablespoon of olive oil, and a tablespoon of freshly squeezed lemon juice.

Additionally, you know how pears and apples turn brown almost immediately after you cut them? Here’s a little trick ~ fill up a cereal bowl halfway with water, and squeeze in the juice of half a lemon. Dunk the slices in the water for a spell, then arrange on your platter! The acidity of the lemon water will keep the pears from oxidizing, and you’ll have fresh looking pears for the entirety of your party!

I hope you feel comfortable putting together this bad-ass cheese plate for your St. Patrick’s Day Potluck! I’ll be more than happy to answer any questions that you may have – just leave them in the comments below. Play around with different Kerrygold cheeses too! The fun is in the experimenting!

For even more inspiration, check out all of my homie’s dishes that they brought to our Potluck Party!

The Dubliner Judge
by The Culinary Diva 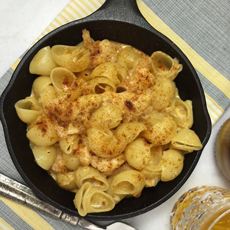 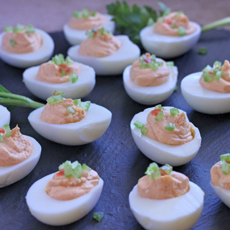 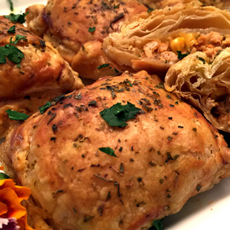 Cheesy Corn Chowder
by Within My Means 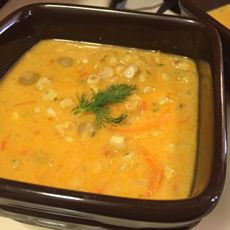 Dubliner Cream Scones
by It’s Okay To Eat The Cupcake 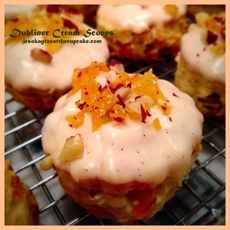 Irish Stuffed Dates
by It’s Okay To Eat The Cupcake 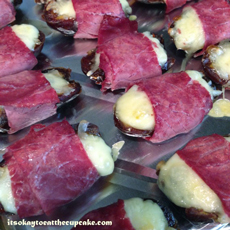 Cheese Fondue
by My Imperfect Kitchen 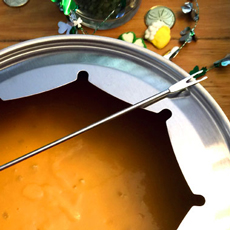 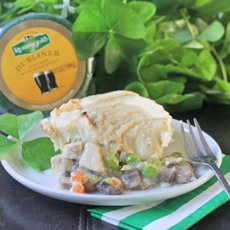 Irish Rarebit
by The Culinary Diva 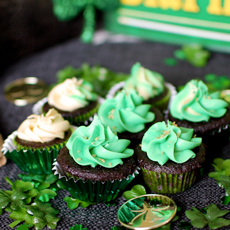 Now for the giveaway deets! Check out this widget below, and follow all the prompts to gain more entries to win the totally awesome Kerrygold prize pack worth $175!! Also, follow Kerrygold on their social media outlets (Facebook, Instagram, Twitter). There are a ton of cheeses and butters in this prize pack, so don’t dilly-dally! The giveaway ends at 12am PST on St. Patrick’s Day (March 17th), and we’ll announce the winner then! GOOD LUCK!

May the Luck of the Irish be with you!

*Disclaimer: Kerrygold sent me the cheeses in this post, but all opinions are entirely my own. (and I LOVE Kerrygold cheese). They are also supplying the gift pack worth $175!