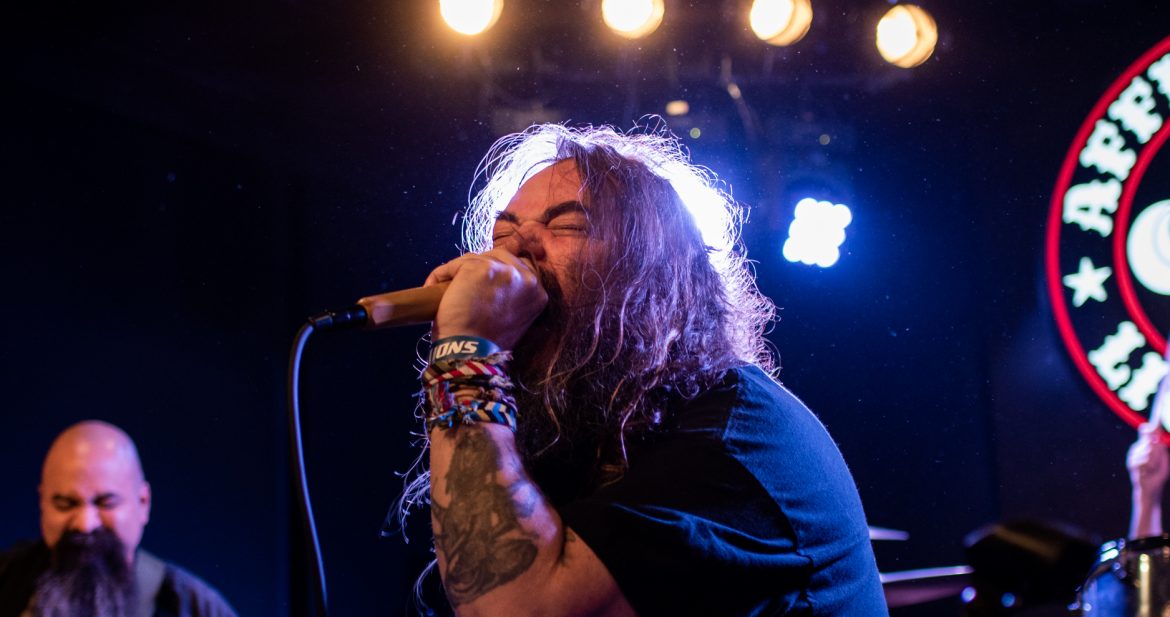 It’s October 19th, 2018, and the new Soulfly album has dropped. To celebrate, Max Cavalera and his son Zyon came to the Affliction Studios in Seal Beach, CA to promote the release of this new album, Ritual.

It had to have been in 1992. I was a metalhead walking to school with Beneath The Remains in my cassette tape walkman. It was really cloudy and drizzly that particular day, and the title track I remember sounding so appropriate for the feel of the day. It was dreary, spooky, soothing, calming, and from then on, I was hooked. Beneath The Remains, Chaos AD, and Arise are among some of my favorite metal albums of all time – all the songs are just so good. Tribal, grungy, human, and real. I’ve been a fan for 26 years so attending this party was a once-in-a-lifetime event!

Interview with Max and Zyon Cavalera on their new album Ritual

Max and his son Zyon, who also plays the drums in Soulfly sat down with Jose Mangin of SiriusXM Liquid Metal at the start of the evening. The anxious crowd surrounds them all at Jose’s DJ booth while they speak of the new album. The un-edited recording of this epic interview will air on Liquid Metal SOON, so keep your ears dialed in for that! One thing I was able to catch though, was that it was Zyon’s heart-beat at the beginning of Refuse/Resist off of the Chaos AD album. It was really neat to have the two of them there while that was being discussed! Jose called that Zyon’s musical debut! 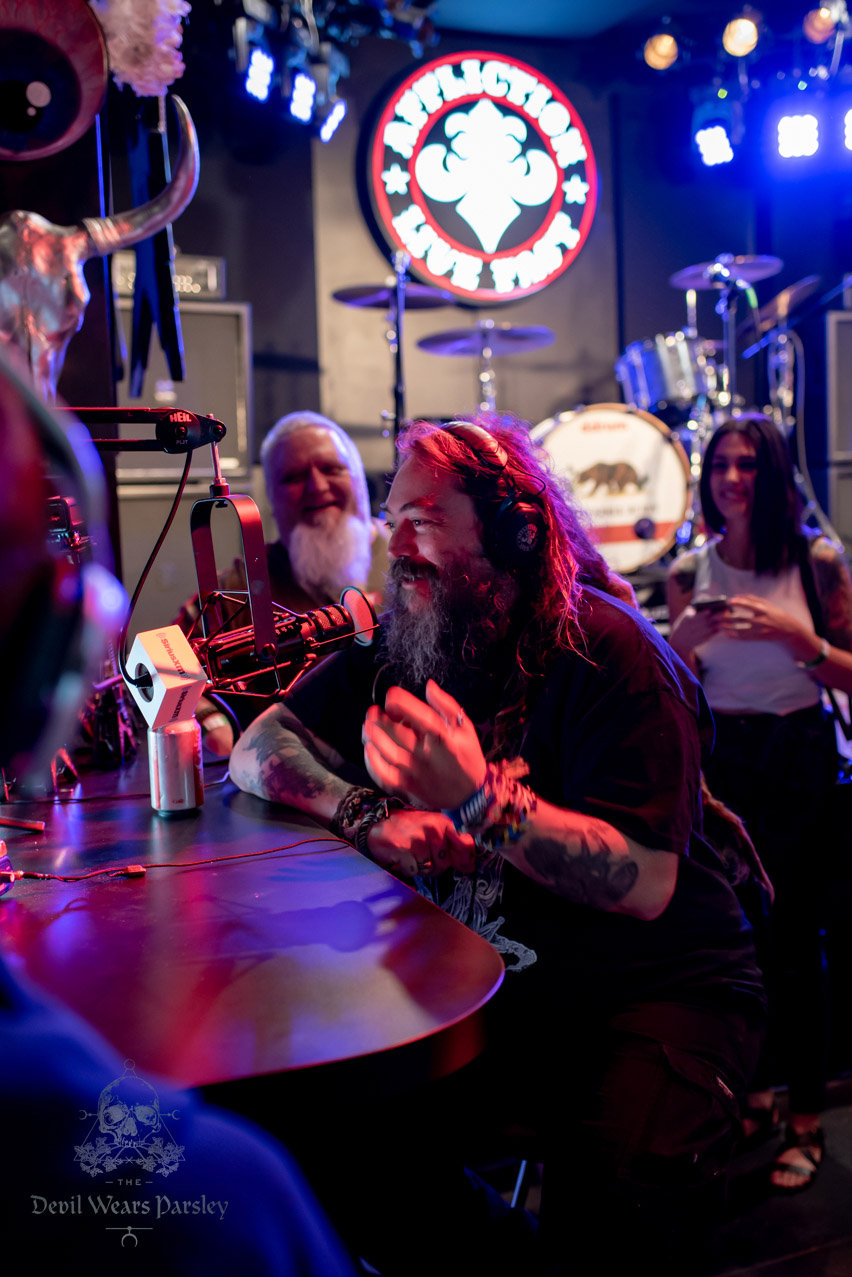 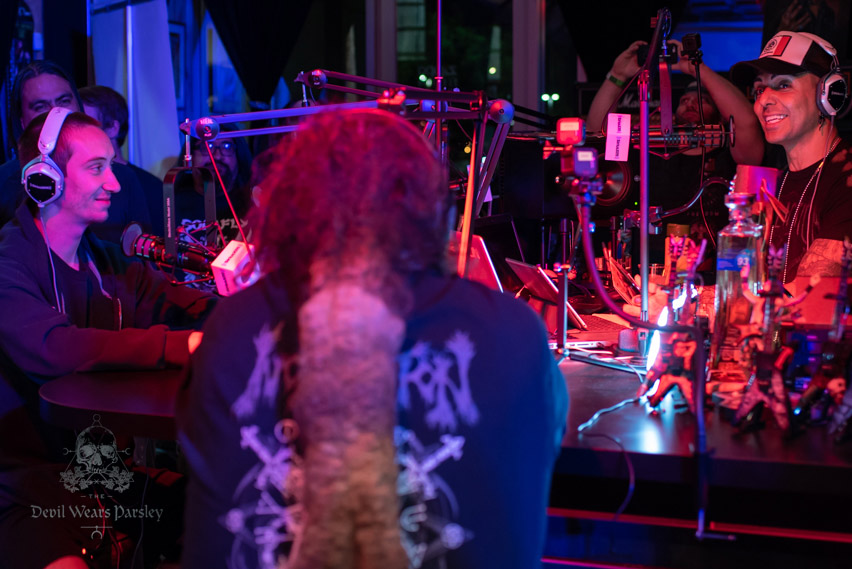 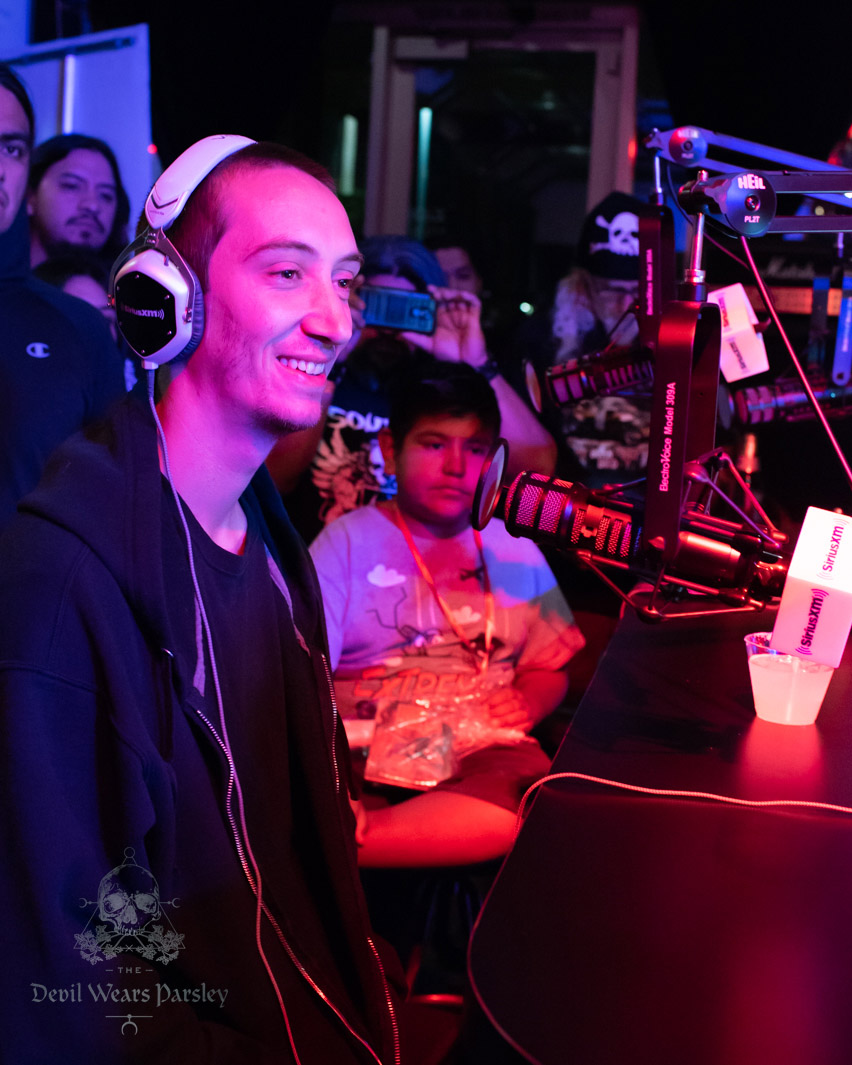 Metal God interview? Check! Promptly following the epic-ness of what happened, the Ritual begins. Ten songs fill the room as the guests mix and mingle, schmooze and booze. The listening parties that Jose throws are truly one of a kind. Remember the olden days when you’d lay back in your bed, feet kicked up, headphones on, and sit there and listen to an entire album, without distraction? That is what I’m reminded of. It’s so nostalgic, and immersive. In this ambience, it’s perfect.

After listening to the album, Max and Zyon appease the crowd with a question and answer session with Jose. One of the questions asked of Max was about the highlight of his career so far. To that he answered being able to play with his son, Zyon. That was definitely in his top ten. How sweet! 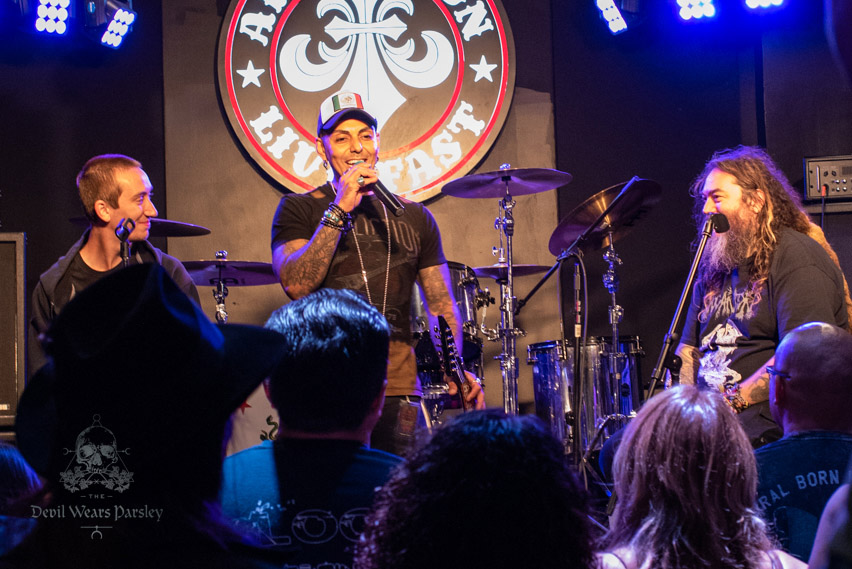 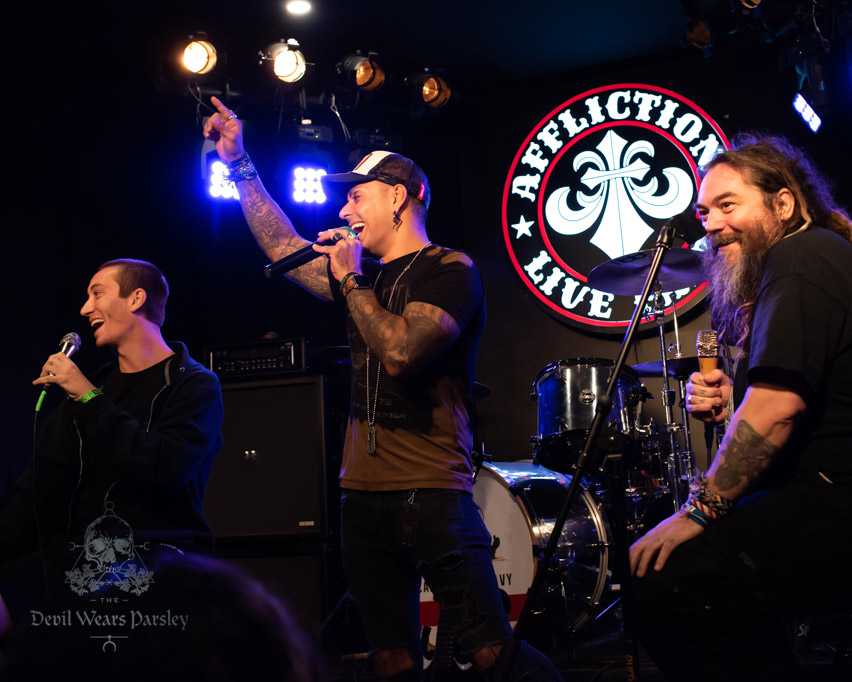 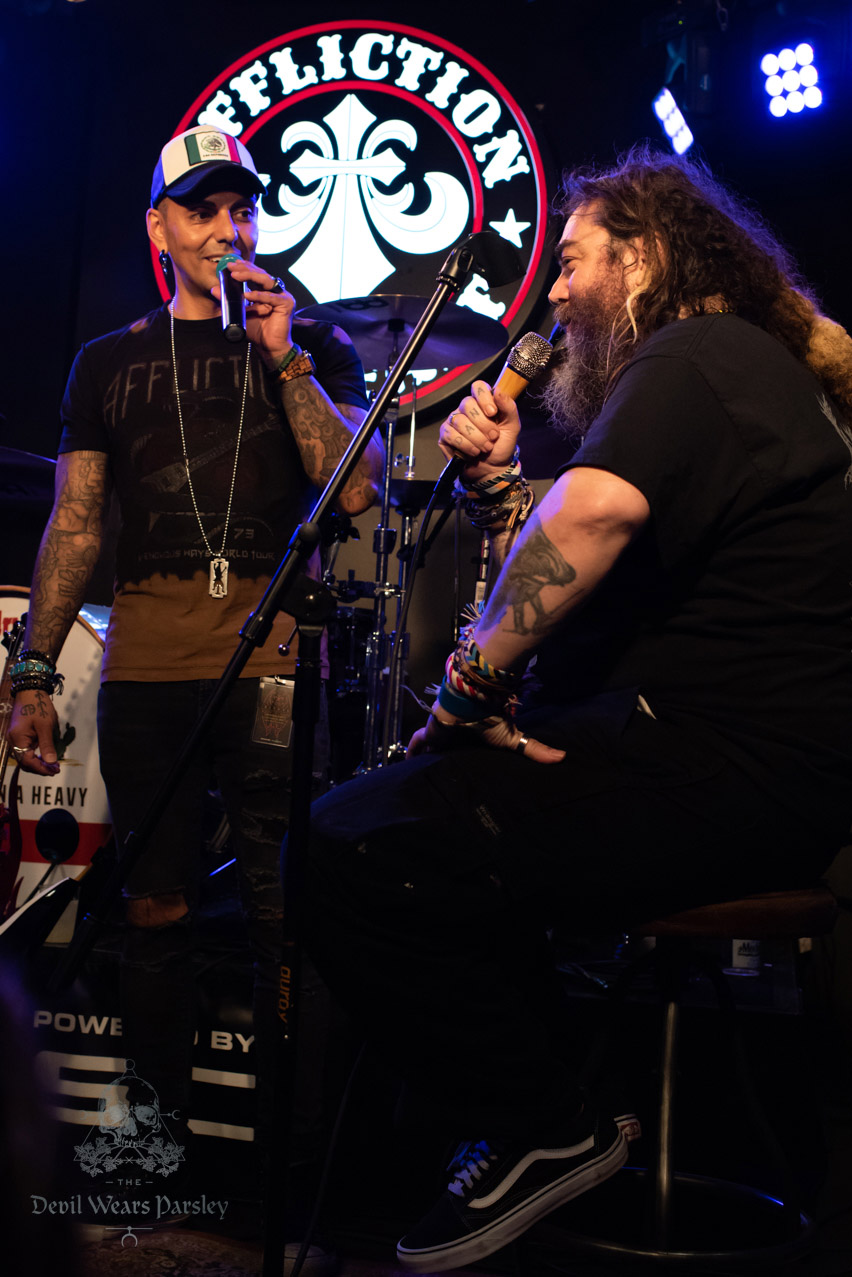 My awesome friend Maria asked whether collaborators seek Max out or does Max do the seeking. To that, he replied that it’s about equal. Zyon and Ritual producer Josh Wilbur go on to tell stories about one collaborator, Randy Blythe of Lamb of God and Burn the Priest, and some of the hurdles that they had to overcome as they were recording this album, and Burn The Priest’s album at the same time. 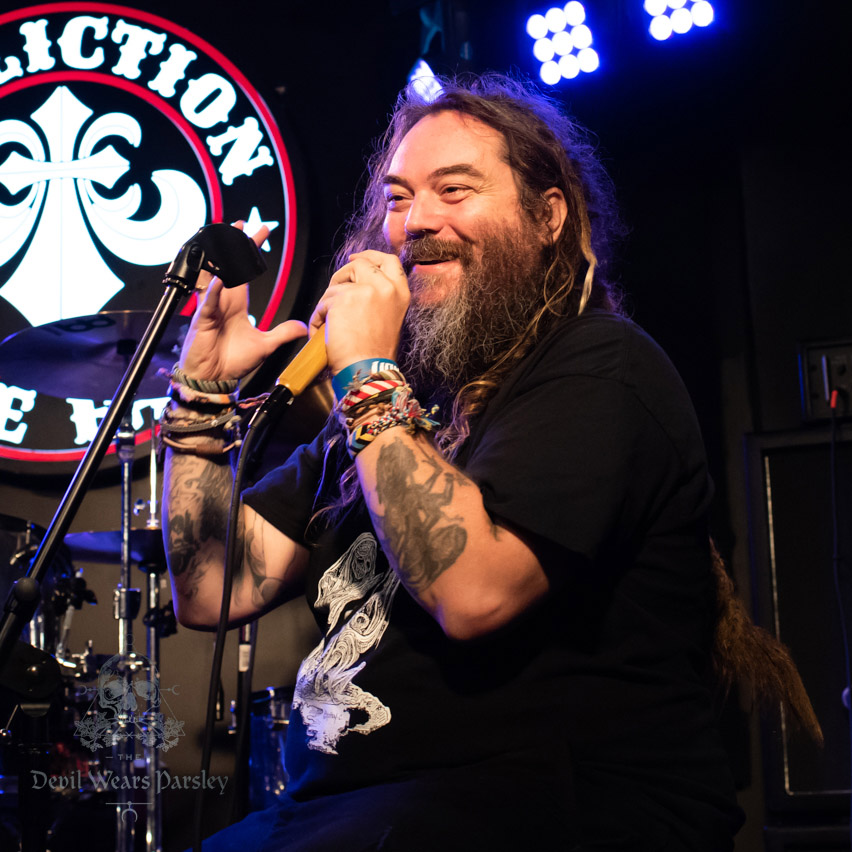 It was a long day of recording for Josh and Randy, knocking out a large amount of songs in one day. Josh had flown out to meet Randy, so they had one night to get it all done. While they were out in Virginia, they decided that Randy would also lay the tracks down for his appearance on Ritual‘s “Dead Behind The Eyes”. They finished all of the Burn The Priest tracks, and after so much hard work, they packed up and called it a night. Around 12am the same night, Josh realizes that they didn’t do the Soulfly track! He calls Randy, being true men of their word, they decided to pull themselves out of bed to go back to the studio to record. 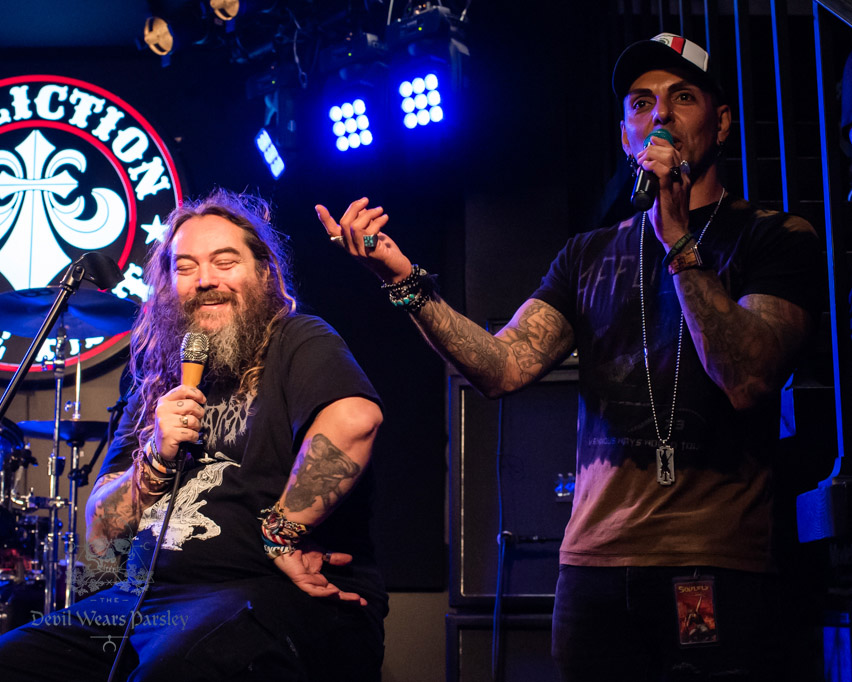 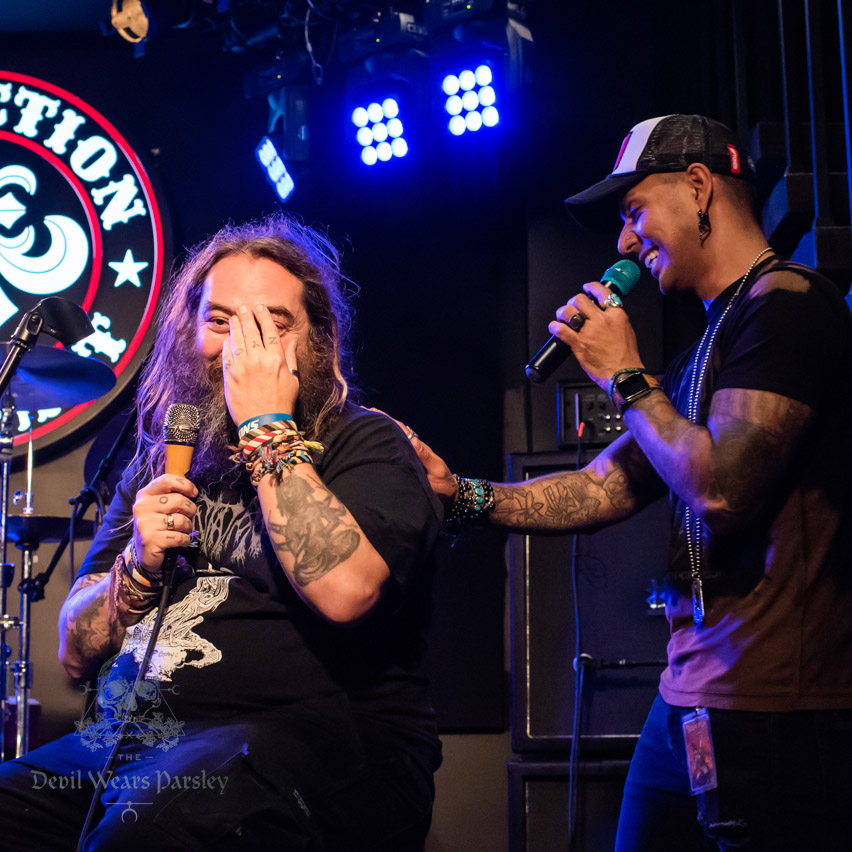 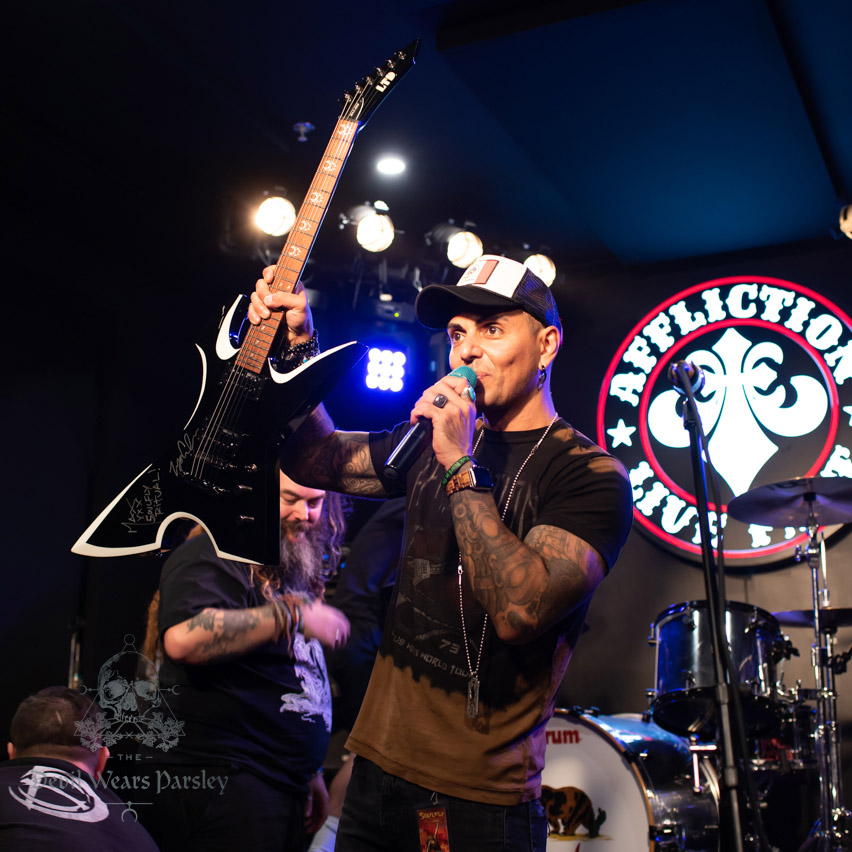 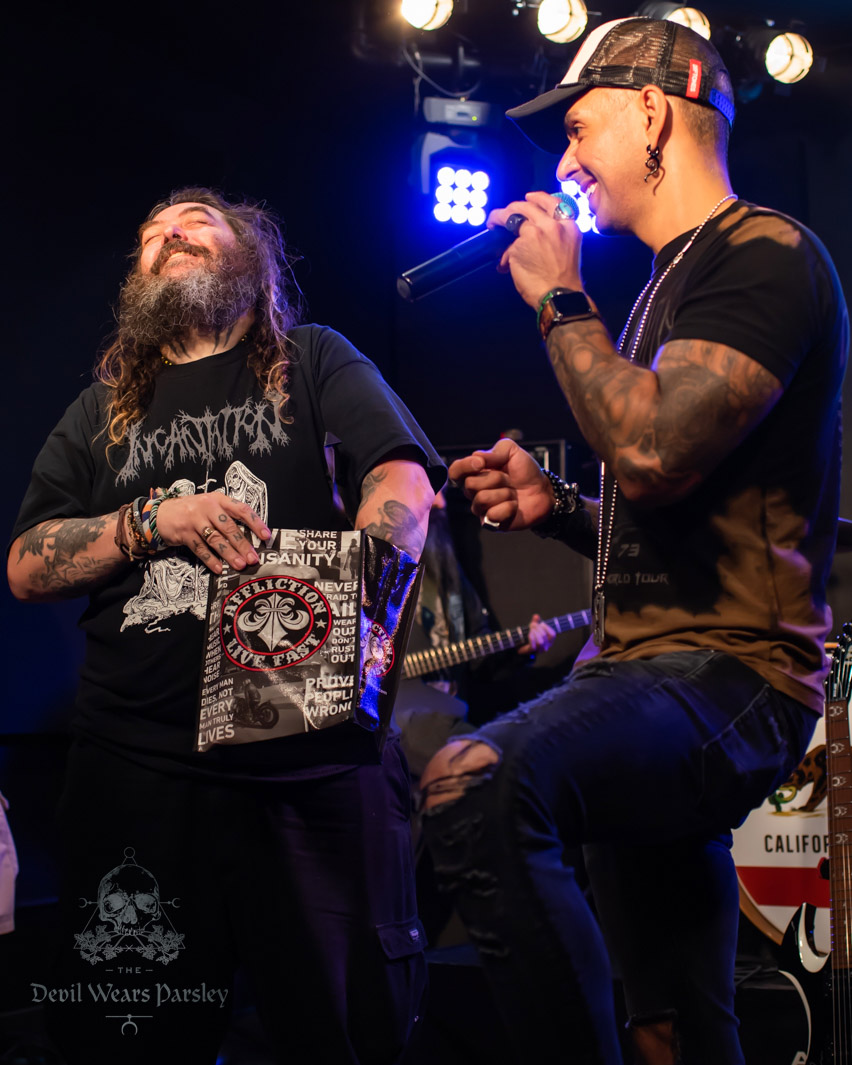 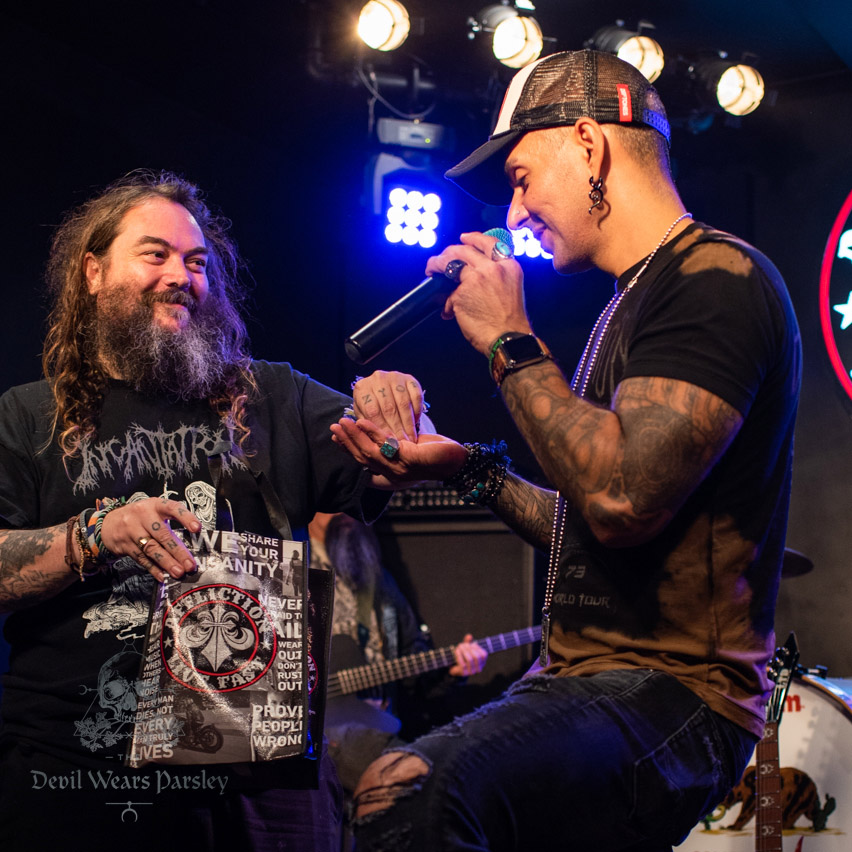 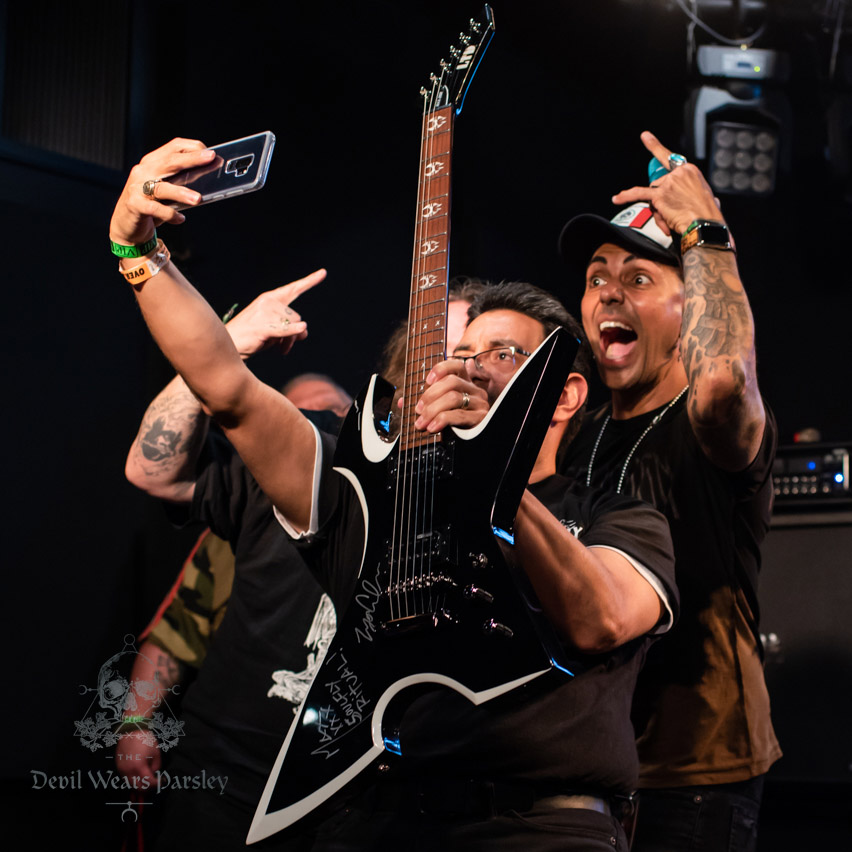 Before the question/answer ended, and before the Guitar giveaway, something truly epic happened, which was precisely why I never like to miss any of Jose’s parties. Max’s wife Gloria was in the crowd, and Dino Cazares from Fear Factory and Asesino was also in the crowd. Then Tony Campos, also from Asesino, formerly of Soulfly showed up too! As the Q&A was winding down, Gloria points out that they have all the instruments represented – Max on vocals of course, Zyon on drums, Dino on guitar, and Tony on the bass. Jose fans the fire, and before you know it, we have an impromptu jam session with metal ledgends! The crew scrambled to get instruments so that this could happen, and it was just one 9-volt battery that was holding us up. The bass that Tony was to use needed a 9-volt battery for the pickups! Leave it to metalheads to save the day. Someone sourced a 9-volt battery in record time, and we were in business. They played a 3 song set including Eye for an Eye (the first single released by Soulfly in 1998), Roots Bloody Roots from Sepultura’s Roots album released in 1996. Before we knew it, Max hopped behind the drum kit, and finished the night with the legendary Walk by Pantera with Jose Mangin on vocals. 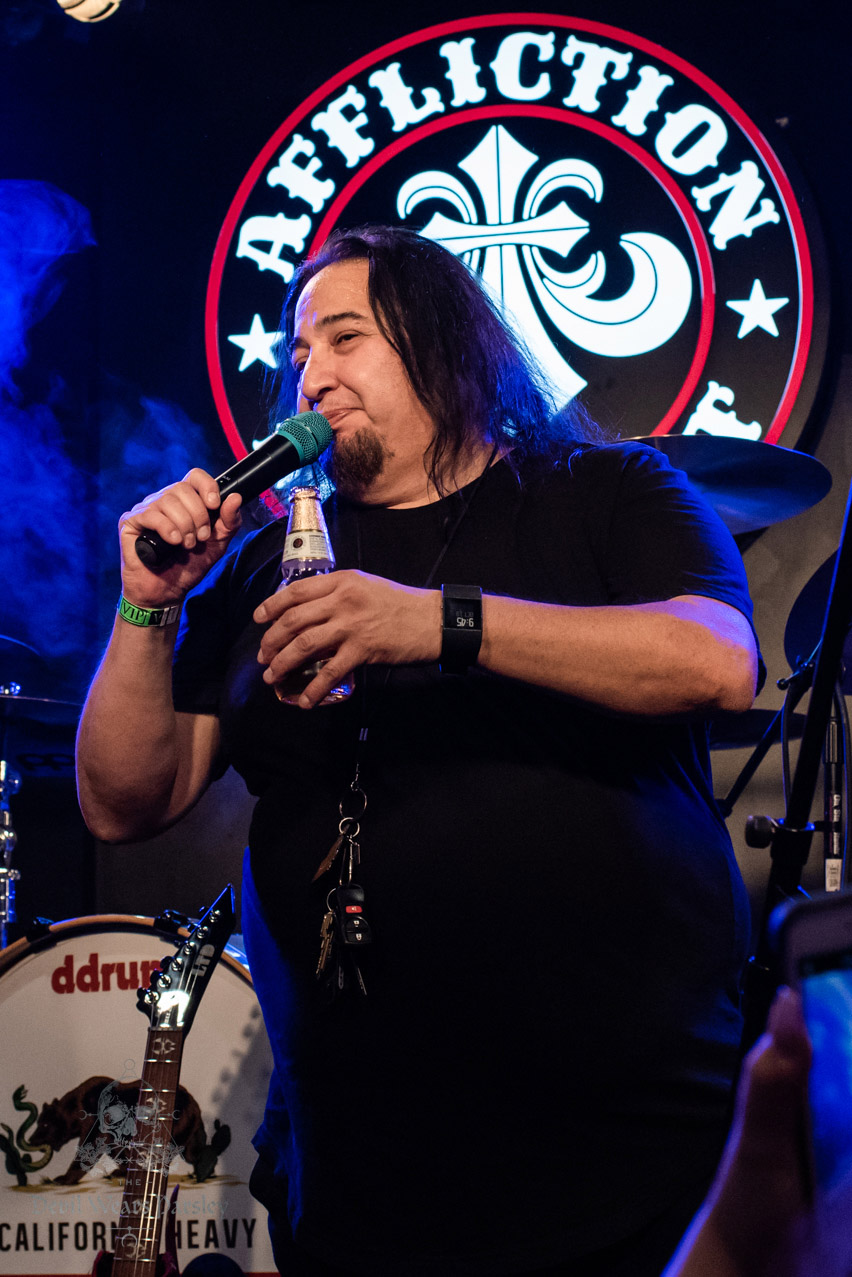 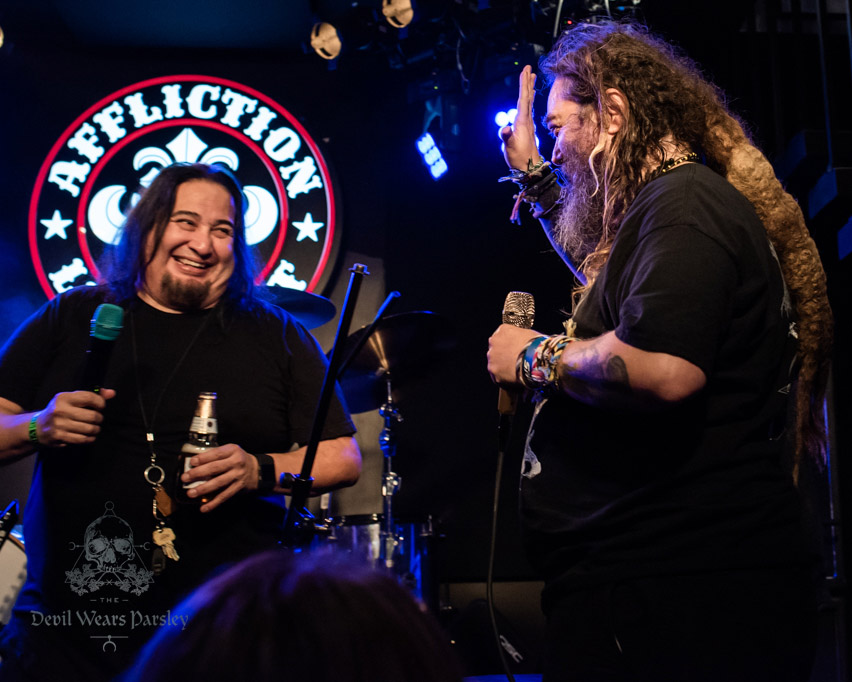 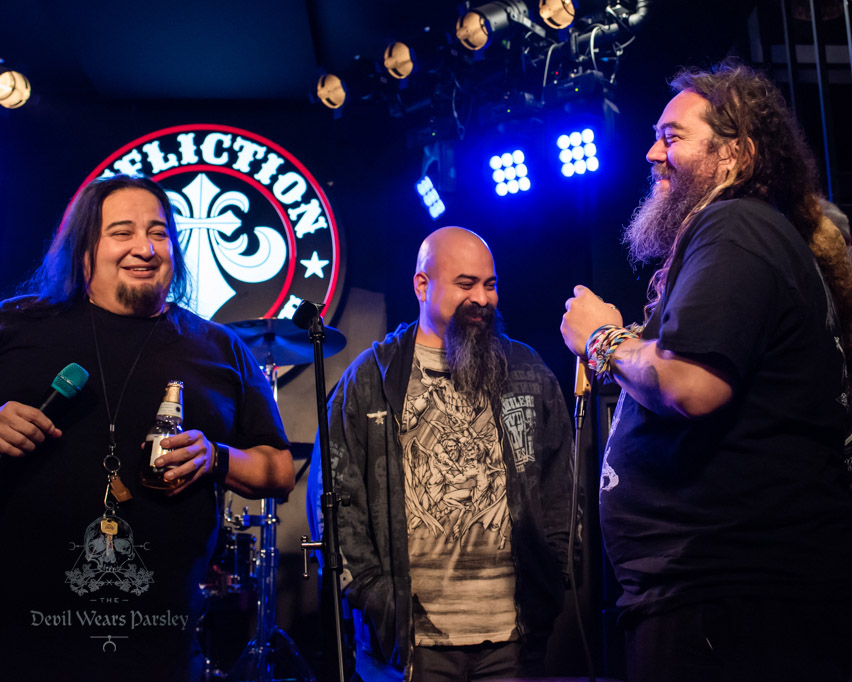 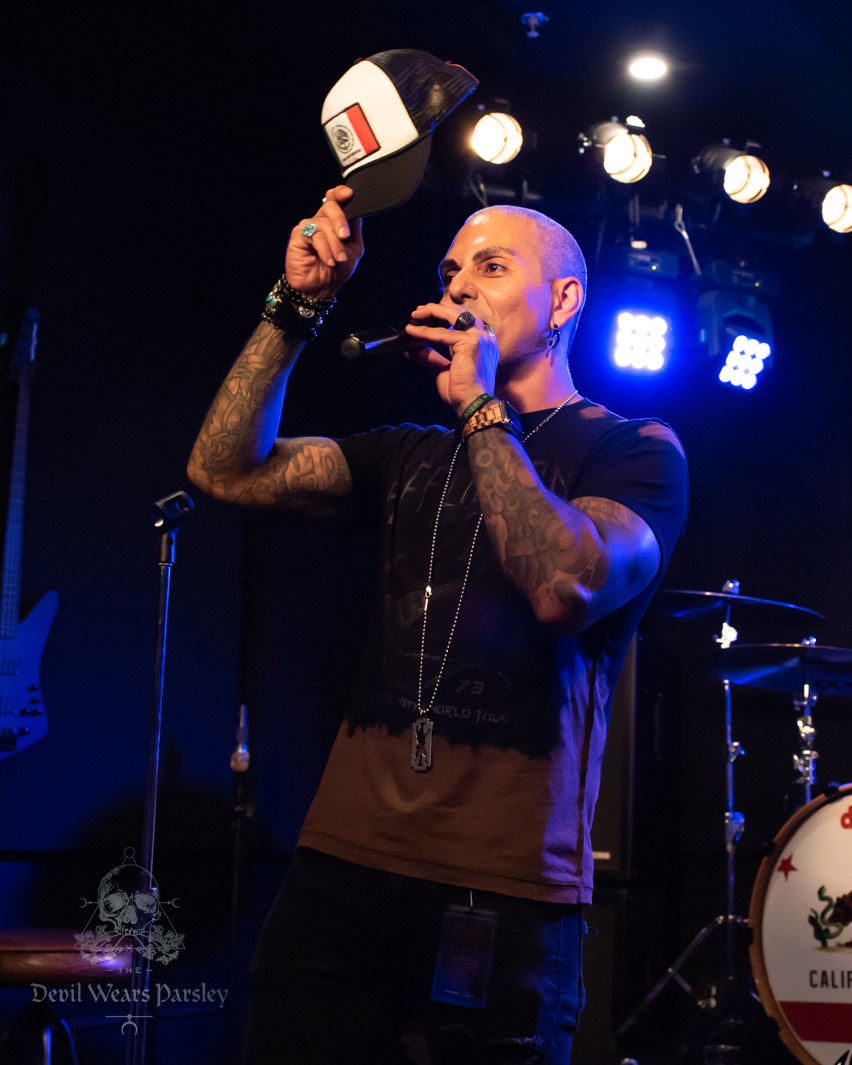 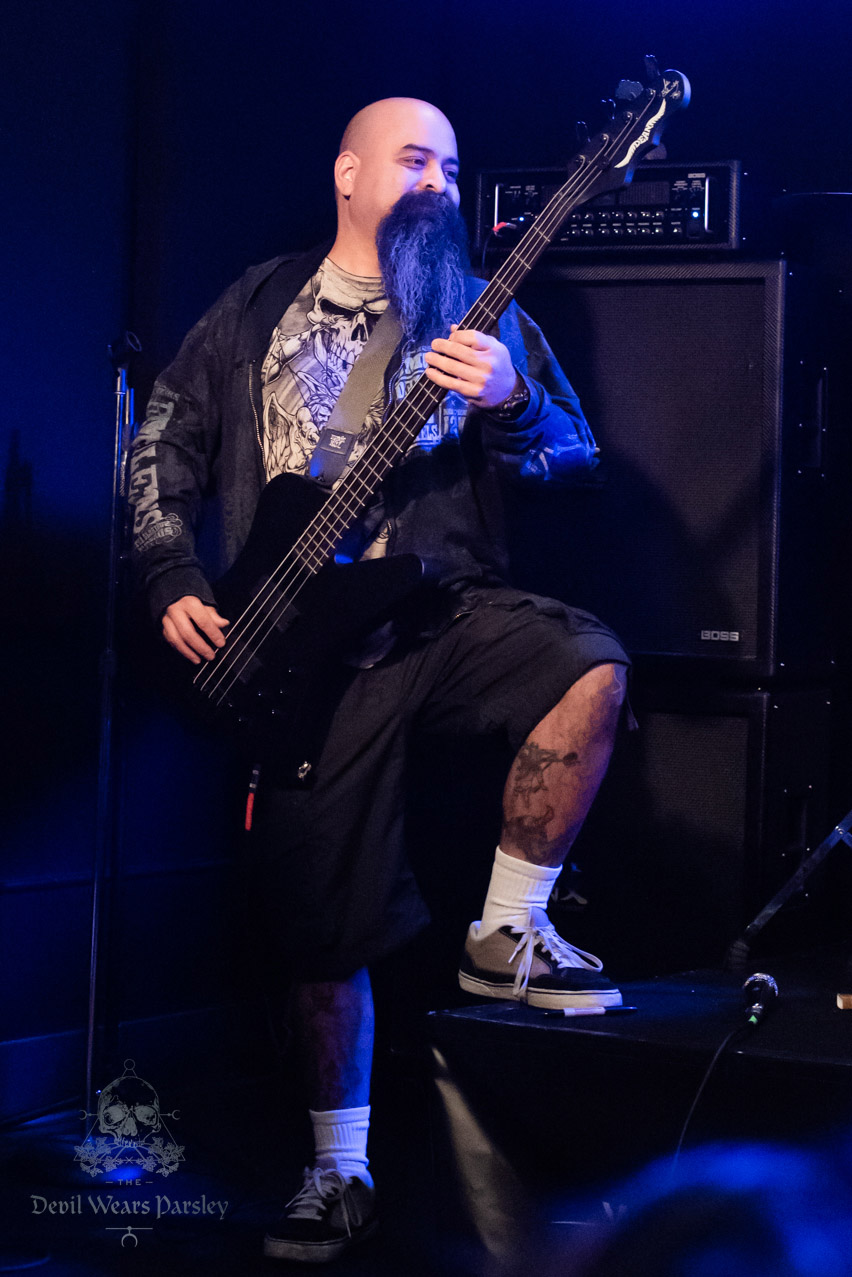 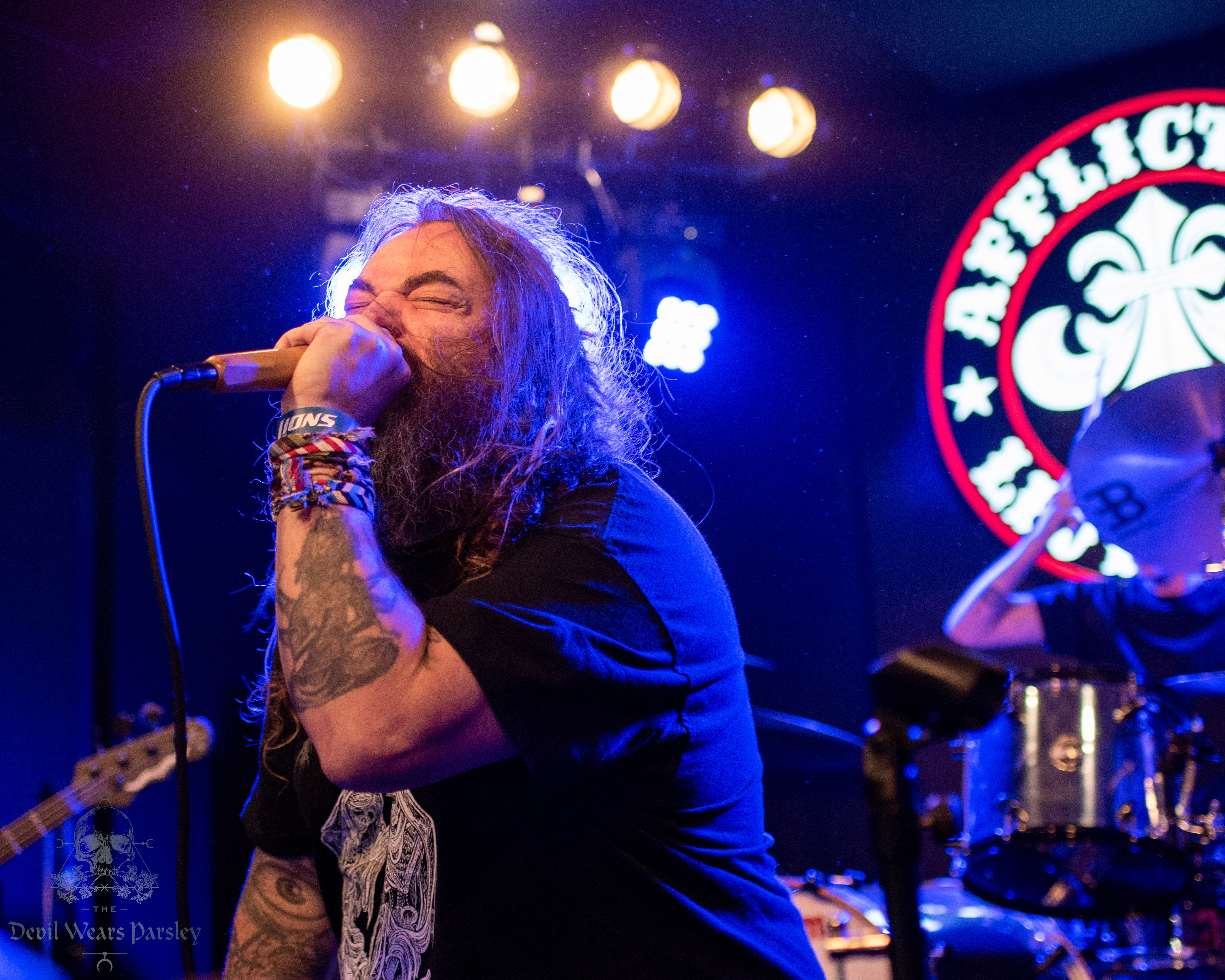 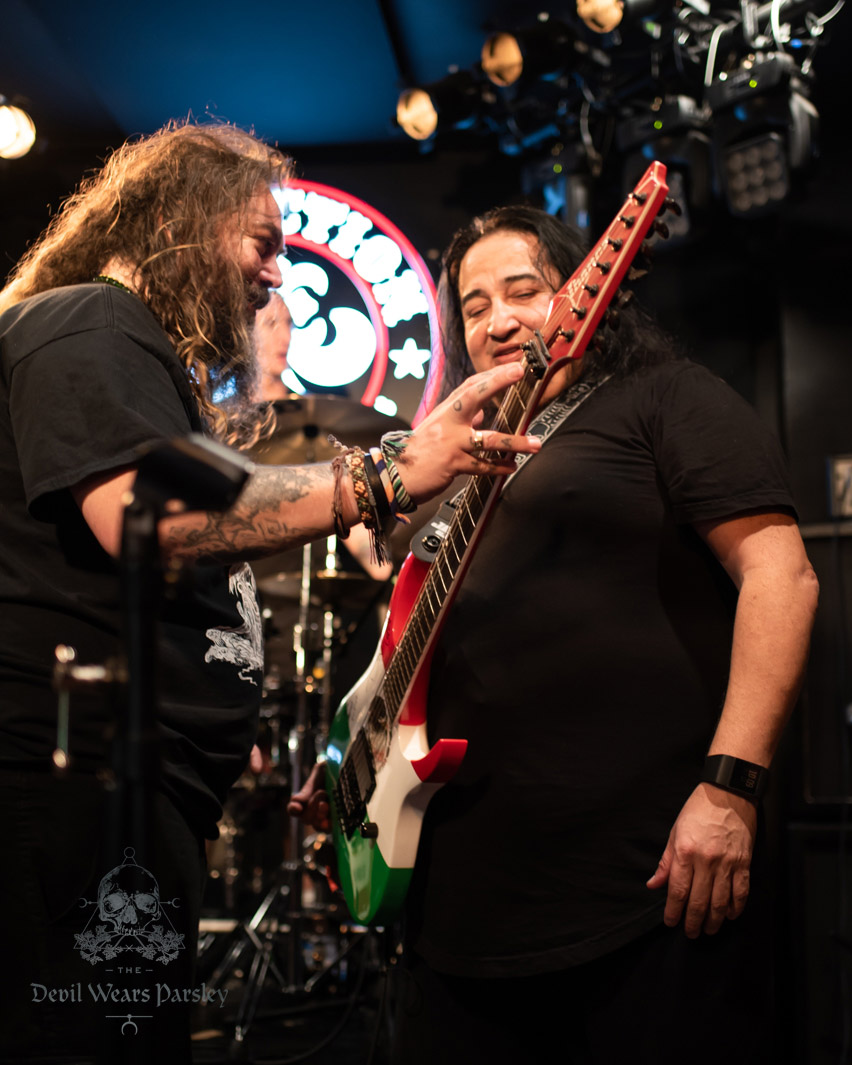 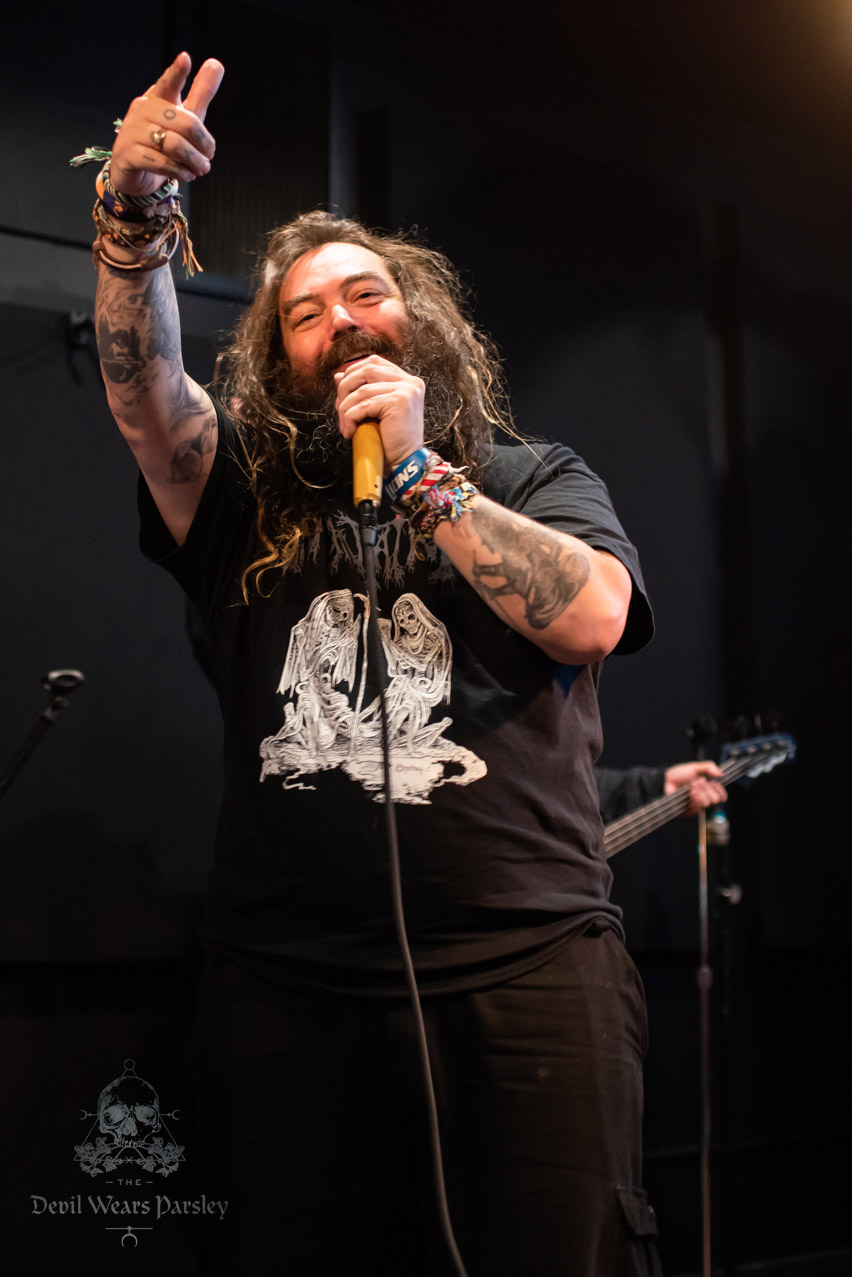 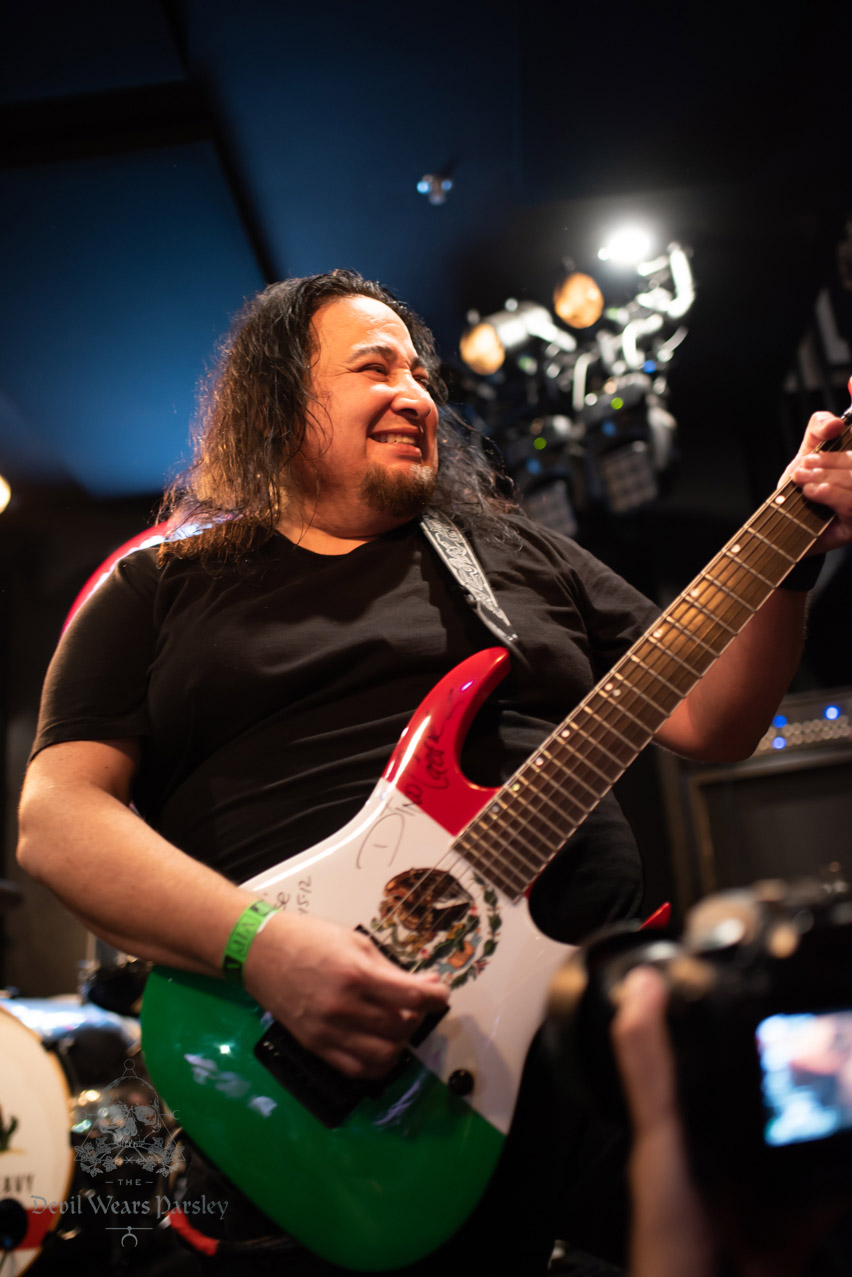 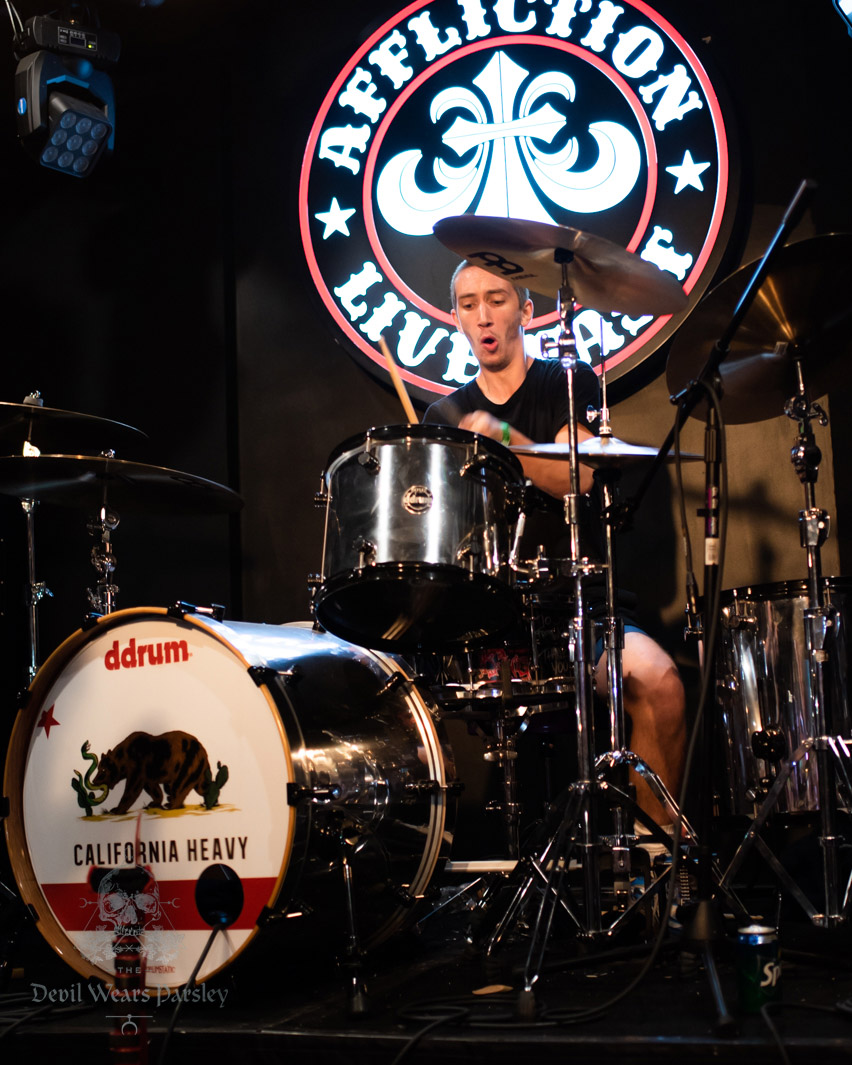 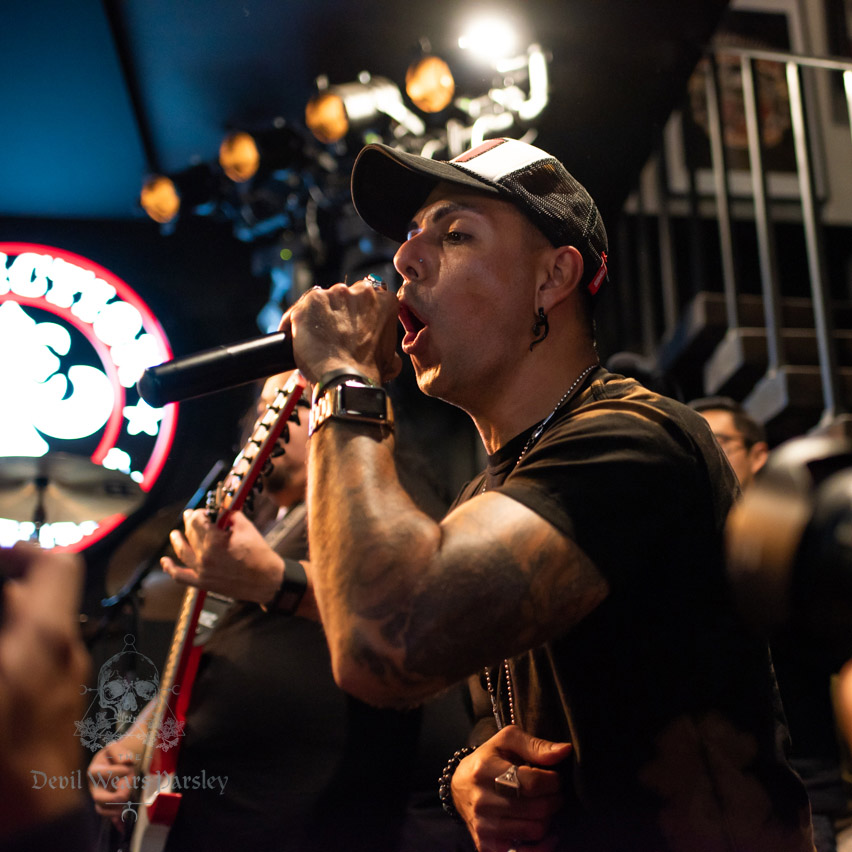 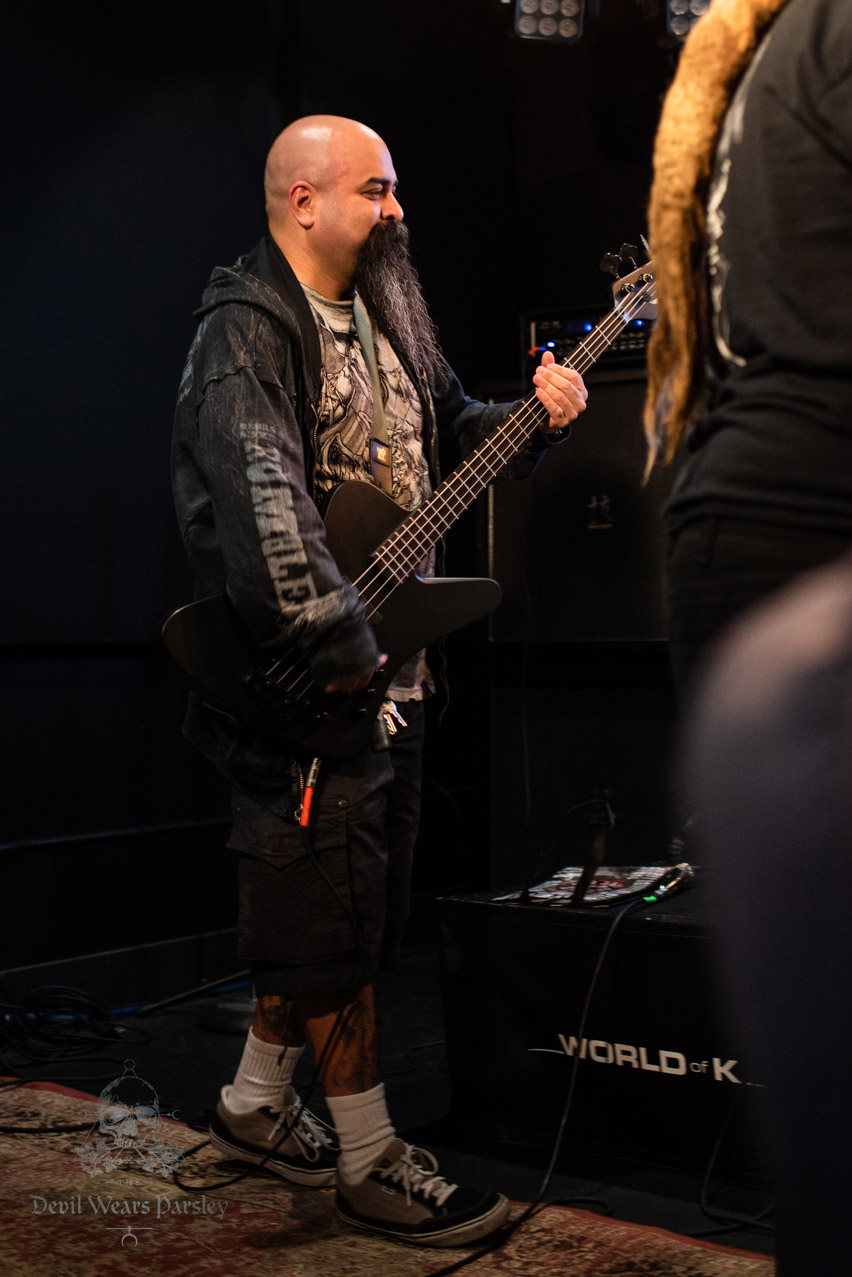 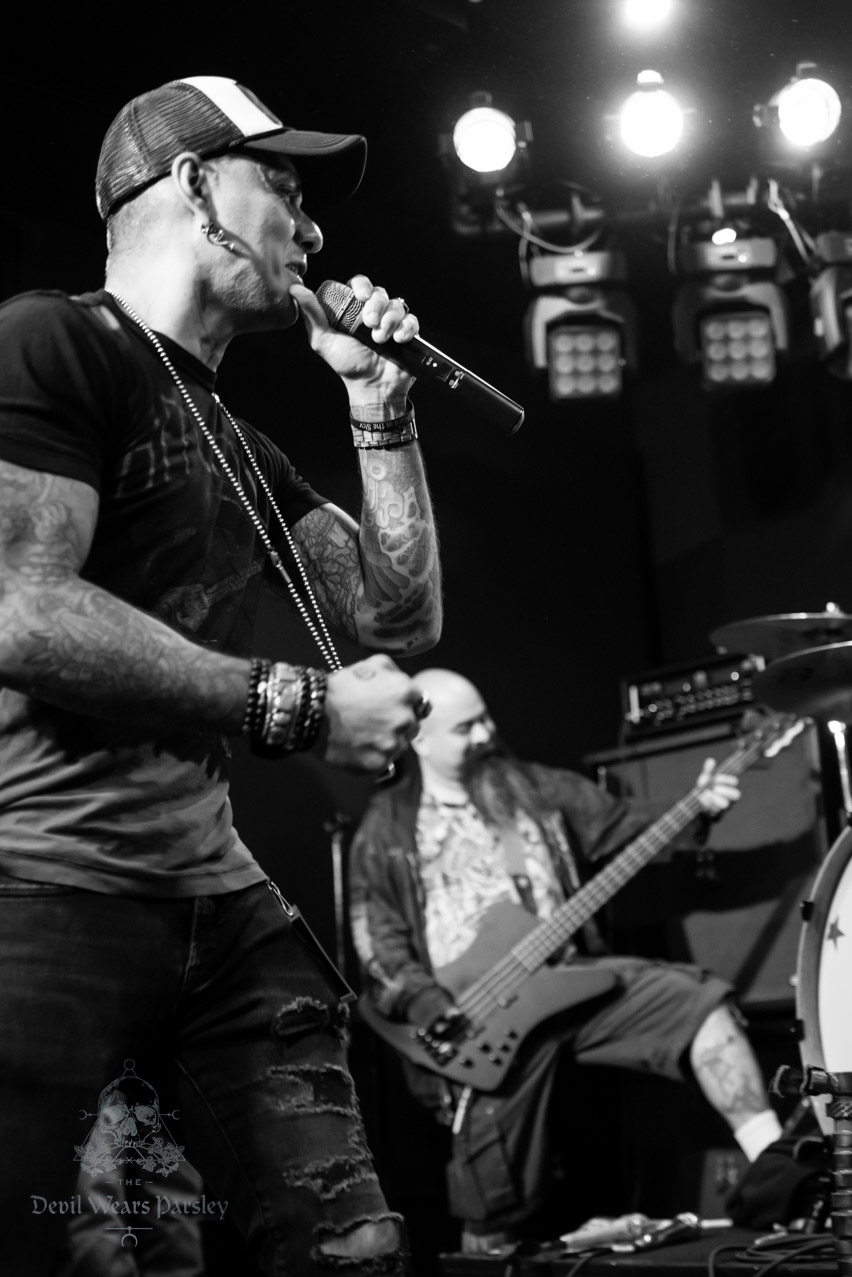 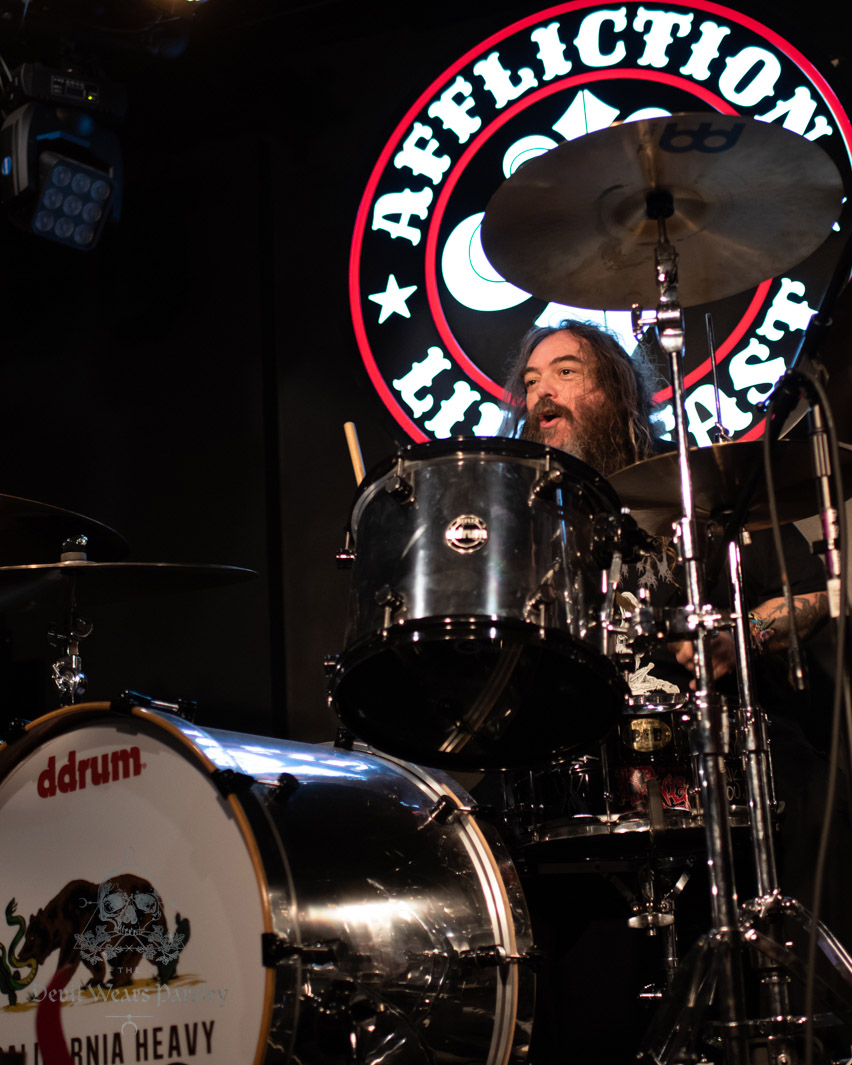 The new album Ritual by Soulfly truly kicks ass. You definitely need to pick up this album – it’s hard, it’s got interesting beats, amazing collaborations, and is overall sick as f! You’re going to love it!