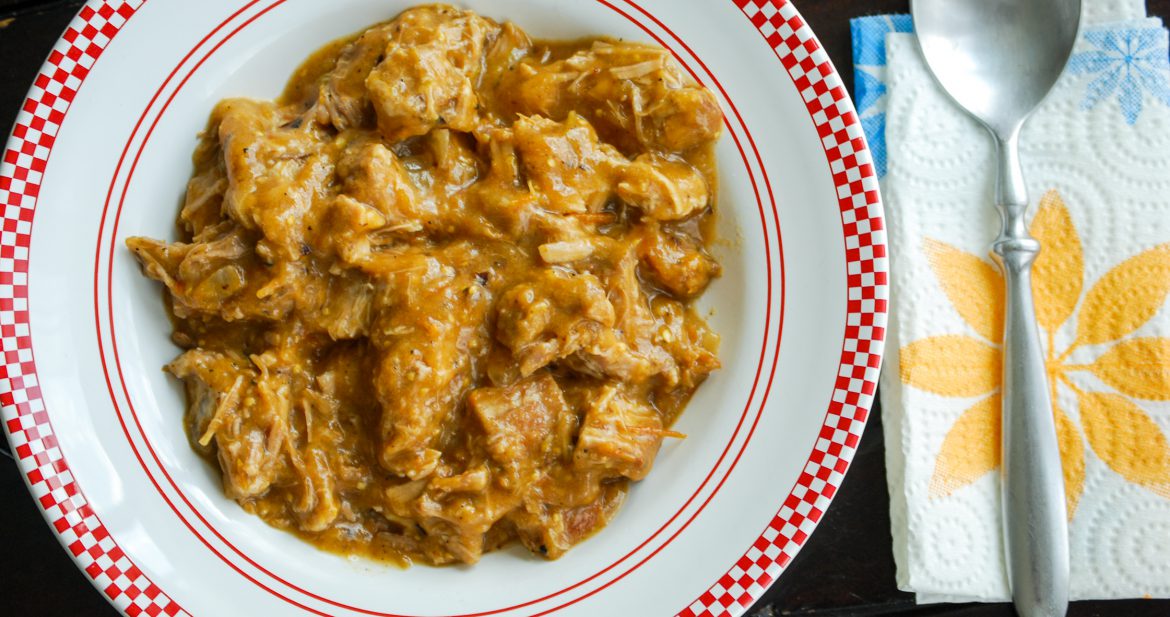 Awhile ago I was at a family birthday party, and I had witnessed my aunt-in-law making Chile Verde. I was a little tipsy(because who doesn’t drink at family parties?!), but I was intent on observing the cooking process… and hopefully getting a bite of her creation. I’ve got to say, I could not believe how easy this recipe was! I’ve ordered Chile Verde all the time in restaurants, but never thought to make it myself. I guess I never really knew what was in it, and never cared enough to ask. All she did was boil tomatillos and jalepeños together in some water, and broiled the pork butt separate. The tomatillos and jalepeños were blended together with the water to make a soupy mixture, and the pork was shredded and added in. It was seasoned with salt, pepper, and Caldo de Res, which is essentially chicken bouillon. That’s how I remember it anyway… She may say different, but that’s what I had picked up in my semi-drunken stupor. 😉

This little story was kept tucked away for a few months, and on Independence weekend, I decided to give my own version a go. I had the basic method down, so I was going to go for it, and even switch it up a bit. I wanted this to be a sort of walk-away meal, meaning once I got all of the ingredients prepped, I could “walk-away” from it by putting everything in the Crock Pot. I love my Crock Pot, but don’t use it nearly as much as I probably should, so this was perfect!

I started by adding tomatoes and onions to the tomatillo/jalepeño mix. I even threw in a half of a green pepper, just because I had it. I knew that the red tomatoes would make the Chile Verde not so verde, so I shall call this creation Chile Verde y Roja! I really REALLY like tomatoes, and had quite a few that were bordering extinction. I wanted to impart even more flavor than just boiling them in water, so I did two things. First, I took the time to roast the vegetables under my broiler, and got a good char on them. Second, well, we’ll talk about that later.

While the veggies were getting their makeover, I seared the pork butt on all sides in the cast iron skillet. The browned outsides are always so GOOD! Into the Crock Pot it goes, along with the roasted veggies.

Ok, the second part of imparting more flavor to the veggies, and the whole dish, really, was using my homemade chicken stock instead of water and chicken boullion. I know everybody thinks that it must be crazy hard and time consuming to make your own chicken stock, but it isn’t, really. I’ll cover that in another post, PROMISE! I have an abundance of the makings of chicken stock, so that post will come sooner than expected methinks.

Back to the Roja. The butt and veggies are Crock Pot at this point, but we have the issue of this cast iron skillet crusted with pork bits. It would be a shame to not do anything with that! So much flavor! So much promise! Chicken stock to the rescue! One cup is all you need to de-glaze that pan, and get those bits up and into the Crock Pot. Yum. YUM YUM! I added just a teeny bit more chicken stock to barely cover the meat and veggies. We don’t want the sauce too runny, but enough moisture to keep the meat moist during the cooking process.

Now, we get to walk away.

I don’t know how ‘authentic’ this is, but it sure tasted awesome! 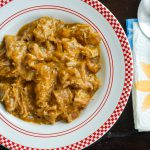