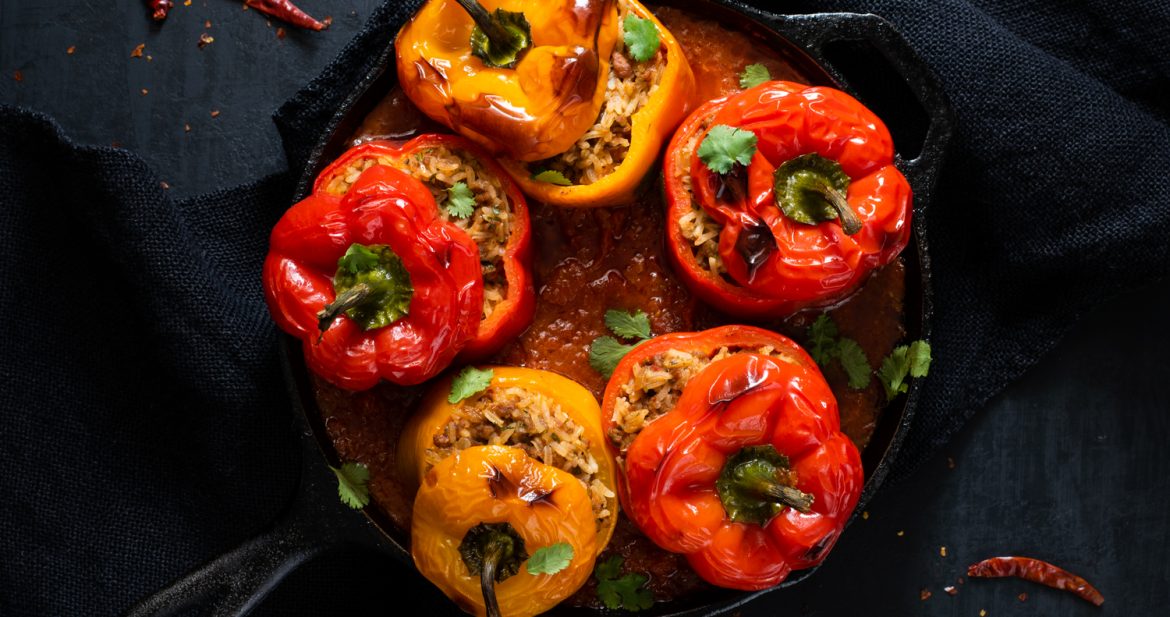 *DISCLAIMER: This is a Sponsored Post brought to you by Misteka Foods. This post also contains affiliate links with Amazon. If you click any of the product links, I get a portion of the proceeds of any purchase at no cost to you. Thank you for your continued support! It helps keep The Devil Wears Parsley around, and I love being here rockin’ with you! All opinions and thoughts are my own.

First of all, I just have to say that the smell of sautéeing onions is the best smell in the WORLD. Fight me! 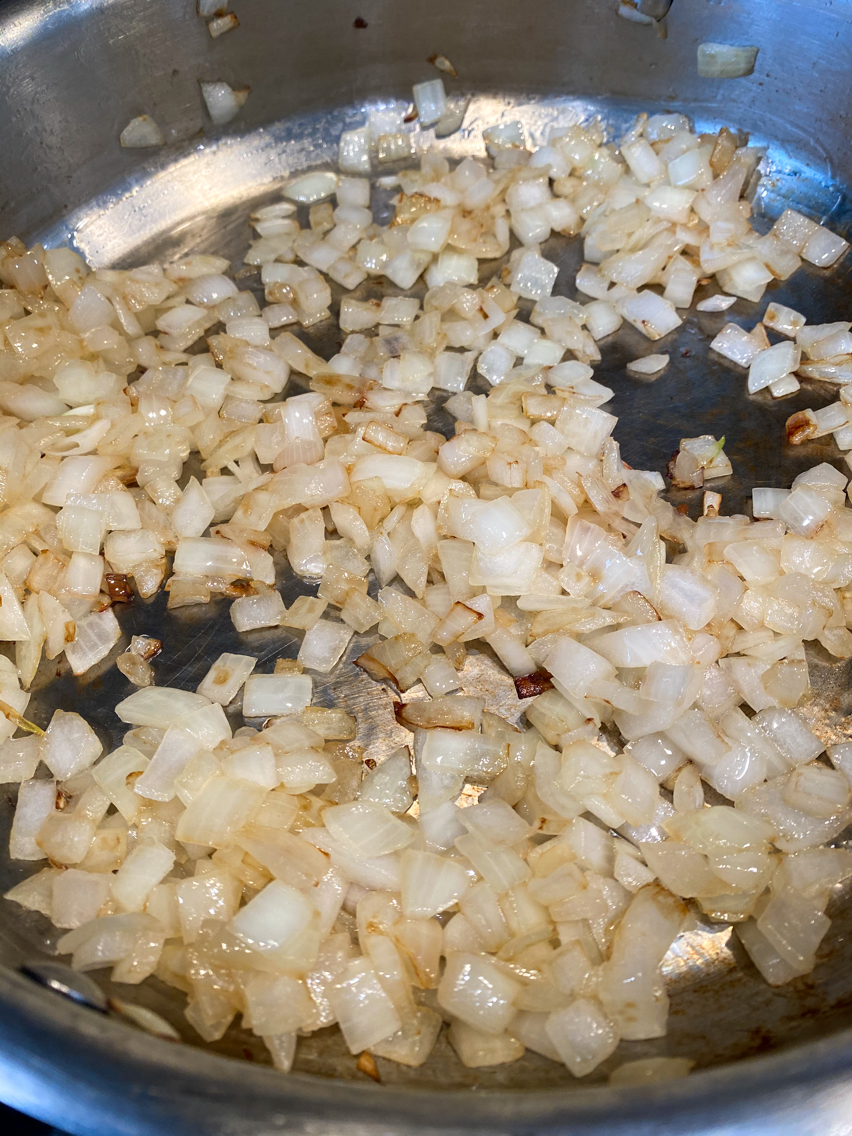 Back in the day, when I was growing up on Natalie avenue (yes, I grew up on a street with the same name as me), my Mom would sometimes make elaborate dinners. One of which was stuffed peppers. I’m not sure exactly where her recipe came from, but if I had to guess, it would be of the Polish variety. Where she grew up in North Braddock, PA, there was a melting pot of Germans, Italians, and Poles.

I never liked eating my Mom’s stuffed peppers, even though I was still fond of them. She always made them with green peppers, which I absolutely did not like as a child. It probably drove her nuts that I would only eat the filling of the pepper (which I did think was delicious), while leaving the roasty green pepper behind. I remember helping her in the kitchen by handling the mixing of the Campbell’s Tomato Soup concentrate with water, and spooning it around the peppers, preparing it for the bake. Those food memories are so strong growing up! 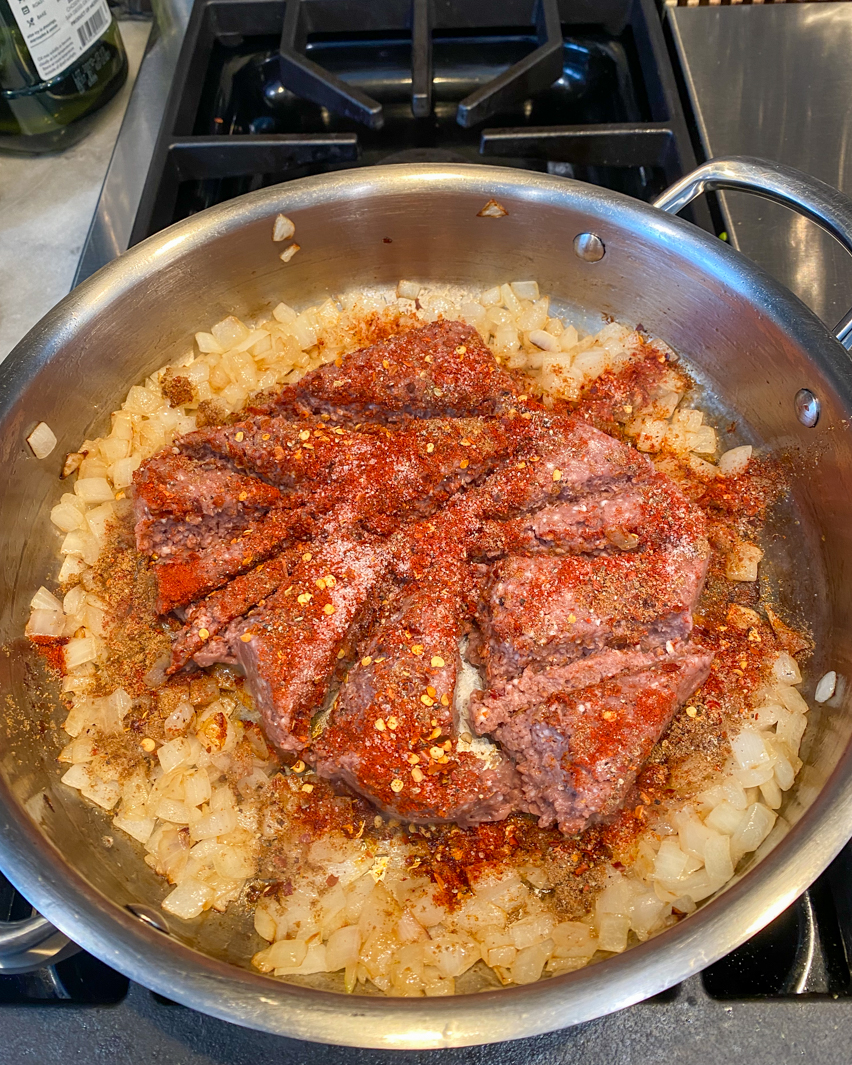 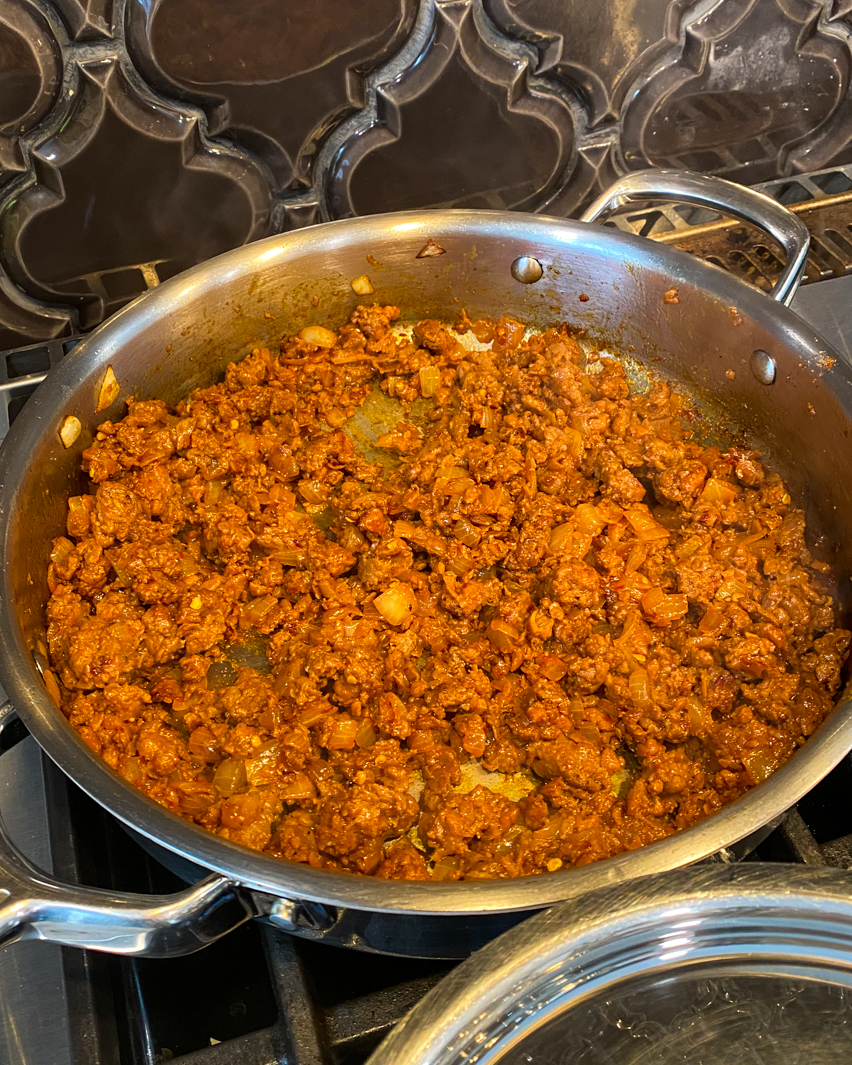 Now that I’m older, I definitely have more of an affinity for green peppers, but I still prefer the red, orange, and yellow over them. They’re sweeter, which I think is why I like them more. Web MD states that they have 11 times more beta-carotene than the green variety, and 1.5 times more vitamin C. I’m sooo down with that. 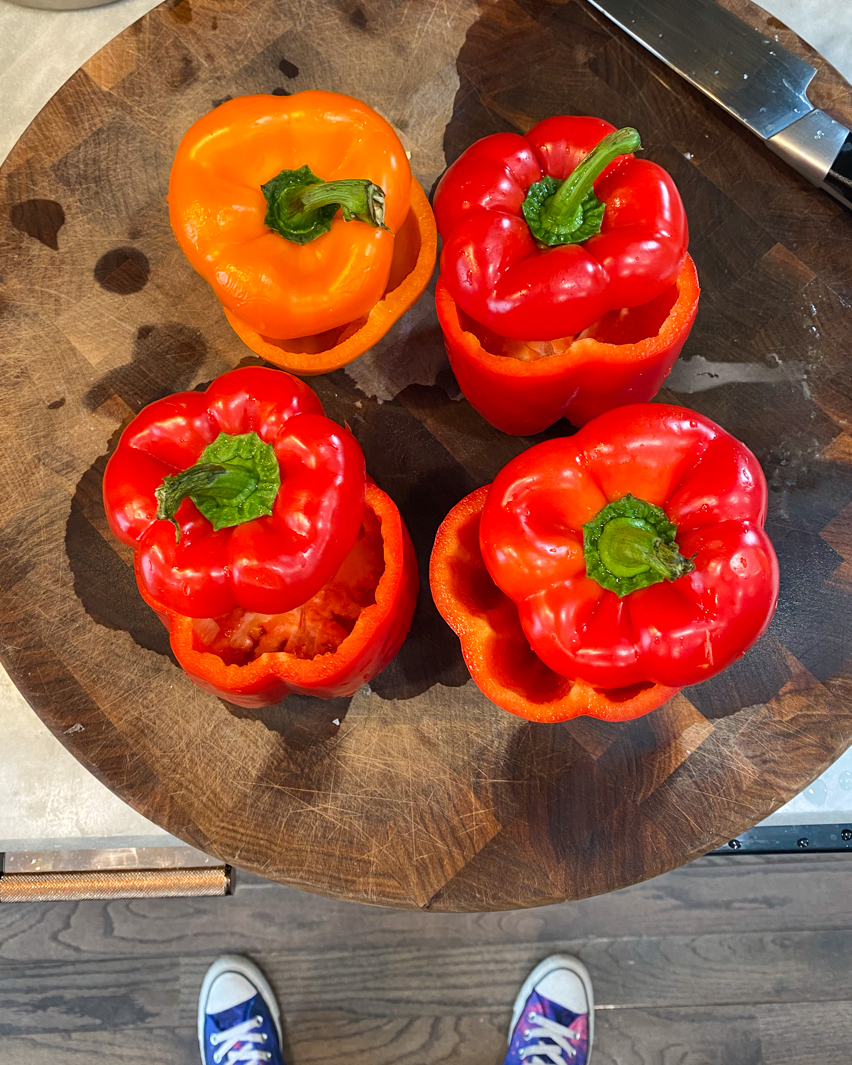 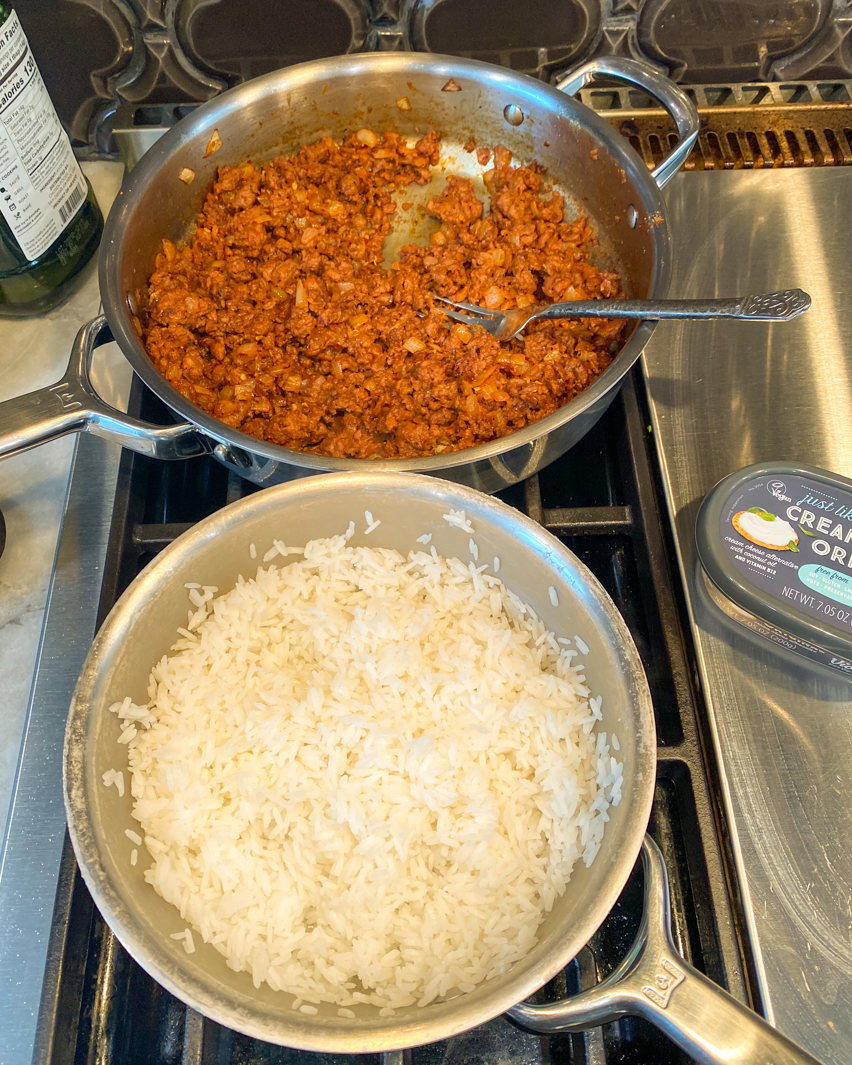 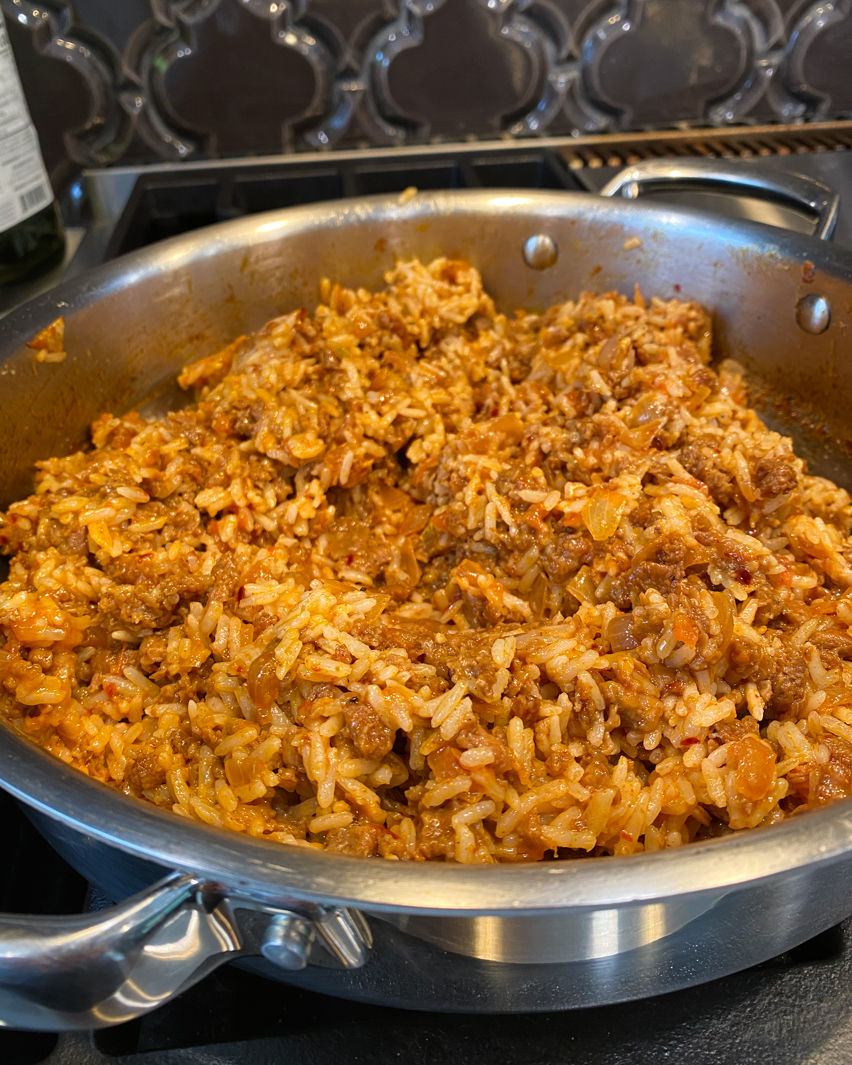 Even the stuffing gets an update in my household from the sometimes bland ground beef and rice that was traditional in my house growing up. I’ve always loved Mexican food, so that classic combination of cumin, coriander, smoked paprika, and chile flake were a must in this version. Additionally, my time at T.G.I.Friday’s kept entering my brain along with this short lived appetizer called Firecracker Crab Rolls, and also served as inspiration to make this a creamy, spicy flavor bomb. Firecracker sounds so appealing, doesn’t it? You know you’re going to get a lively dish with that descriptor. 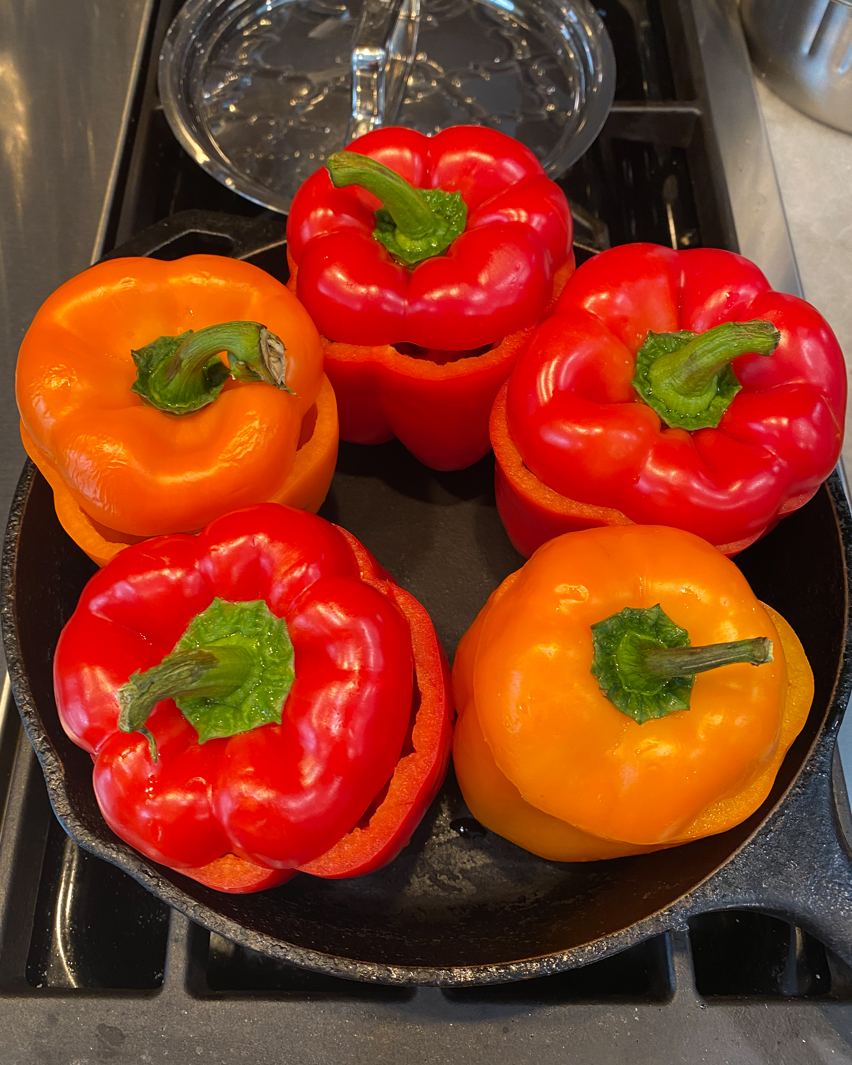 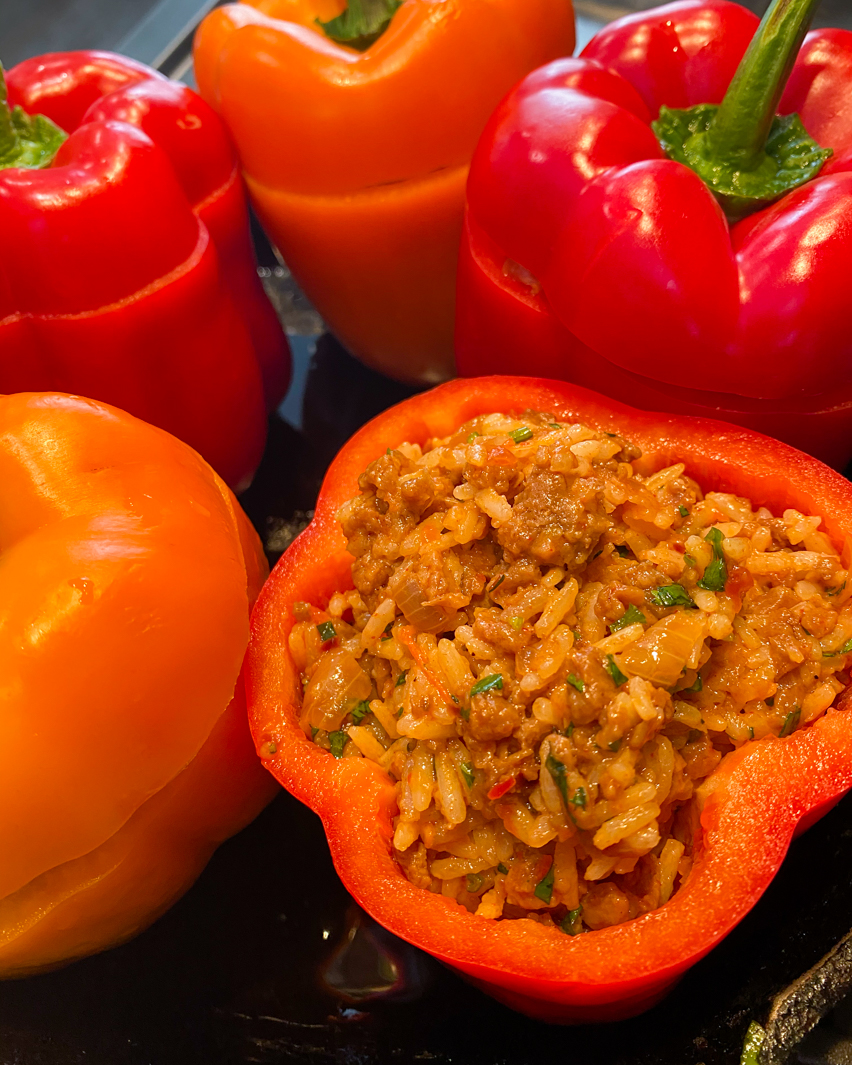 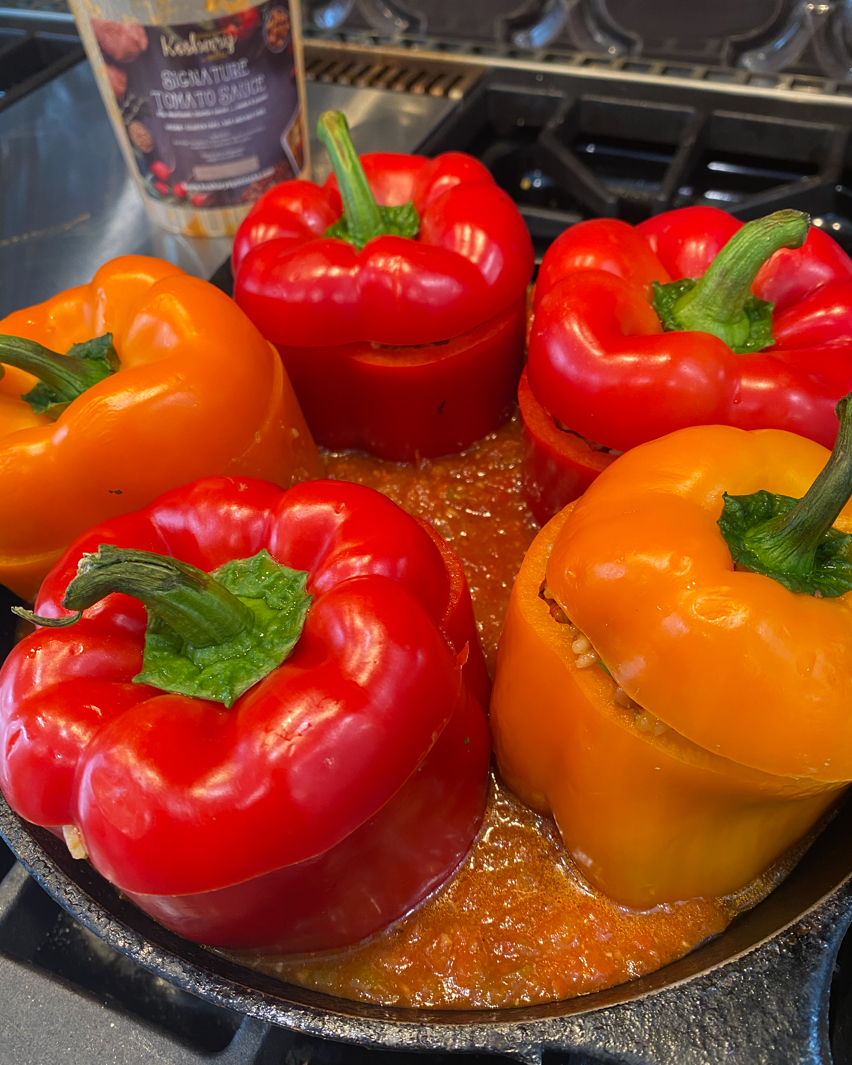 The inspiration for this dish actually came from my research into Egyptian cuisine, as the sauce we are using is a unique spin on Egyptian Tomato Sauce. I knew this would be perfect for the pool of tomato sauce that my family’s stuffed peppers were used to, but offers a grand update with its complex flavor profile. I was delighted to find that Egyptian cuisine has a similar dish called Mahshi, which translates to stuffed squash, though other vegetables can be used, like bell peppers, eggplant, tomatoes, and potatoes. So, we are inspired by many regions, and histories across time, both personal and worldly. My childhood memories of stuffed peppers, the stuffed peppers or Mahshi from Egypt, and the Mexican spices that I love so much. 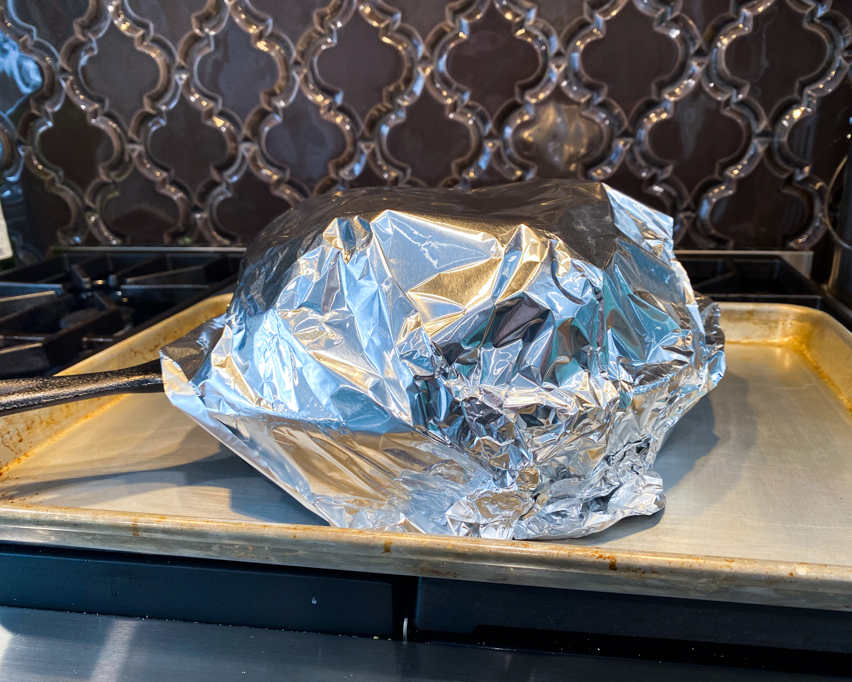 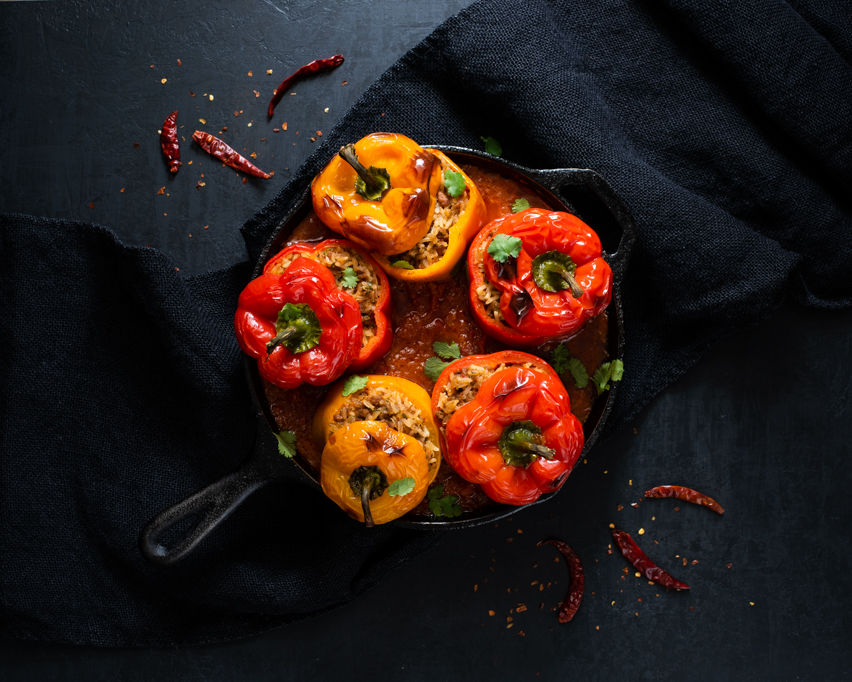 Misteka Foods Signature Tomato Sauce elevates this dish by creating a more complex pepper bath than the canned tomato soup that I’m accustomed to. It pairs so well with the creamy and spicy meat filling. Their sauce is available in 32 ounce jars for $13.85 through her website, under Sauce and Dressings. Other sauces are available as well. This sauce needs to be refrigerated, so it’s available locally in and around Clarksville, MD.

You can find Koshary by Misteka on the following social channels: 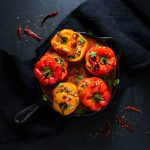 To Make The Peppers

For the peppers, try to pick those that aren’t too lopsided and stand up well on their own. If the peppers are small, you may need more than 5. It’s also possible that you’ll have leftover stuffing. It’s a great addition to avocado toast, tacos, or burritos! You can make these as spicy as you want. If you don’t like spice, omit the red pepper flakes. Alternately, if you love spice, you can use something spicier than red pepper flakes, or your favorite hot sauce. For the cream cheese, I used Violive brand, but there are others out there that would be equally delicious!
Previous Post: « Seven Pots of Tea
Next Post: Vegan Huevos Rancheros »