Move along, boys! This one isn’t for you unless you like rockin’ the makeup!

I absolutely, positively DO NOT consider myself a makeup expert AT ALL, however I do LOVE playing with and experimenting with the stuff. Growing up, I was the kid who was a full-fledged tom-boy, so when I got into the makeup, it was all about being crazy with it. While in my older age I have toned it down some, I still rock it the fuck out when I can. Most of the time though, I do like a softer look for the day-job although my boss is cool enough to let me do whatever I want most (ok, all) of the time!

This past weekend, I took a trip to Sephora, because I was having trouble with some of Kat Von D’s cream eye shadows. I didn’t get ’em. If you put them on by themselves, they “crease up” and look awful in an hour, especially with oily skin like mine. The helpful attendant schooled me in something I’ve never heard of before: Eye shadow concealer. 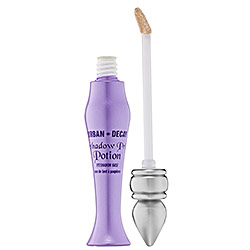 In the back of my head, I’m thinking, “whaaat the eff is this shit”. She explained that it prevents the dreaded “crease up” of cream eye shadows. Basically it makes the makeup stick to your skin exactly how you applied it. FANTASTIC!

There’s different types of eye shadow concealers that will either give you a more shimmery look or a more matte finish, and range in color. You’ll come to know that I’m a sucker for shiny shimmery things, so naturally I chose the one that gives you more shimmer. The Sephora expert really liked Urban Decay Shadow Primer Potion, so I decided to give it a shot!

The first application was a disaster. I applied the concealer, and then the cream eye shadow. It was really hard to get a smooth application of the cream shadow, because once the concealer dries, the surface of your lid becomes tacky, but at the same time really dry. I ended up finishing with the powder eye shadows I am used to. The second application was this morning, and I decided to go with a lighter color scheme and stick with my powders, so if I messed up again, it would be easier to correct. It was a great success! Normally I’d have to use quite a bit of powder to get the desired effect, but with the concealer, the color sticks with conviction! It’s great!

If I ever figure out the cream shadow, I’ll be sure to share the secrets! 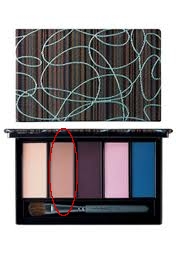 Do you have any cream eye shadow secrets? Or any makeup secrets for that matter?! I’d love to hear them!