Wisconsin is known for its cheese.

The metal band, Static-X is known for its platinum record, Wisconsin Death Trip.

The glue that brings these two things together is Wayne Static, the lead singer, songwriter, and performer of Static-X. He has recently released a long-awaited solo project, Pighammer, under his own name. And his meal of choice? Cheese and toast. 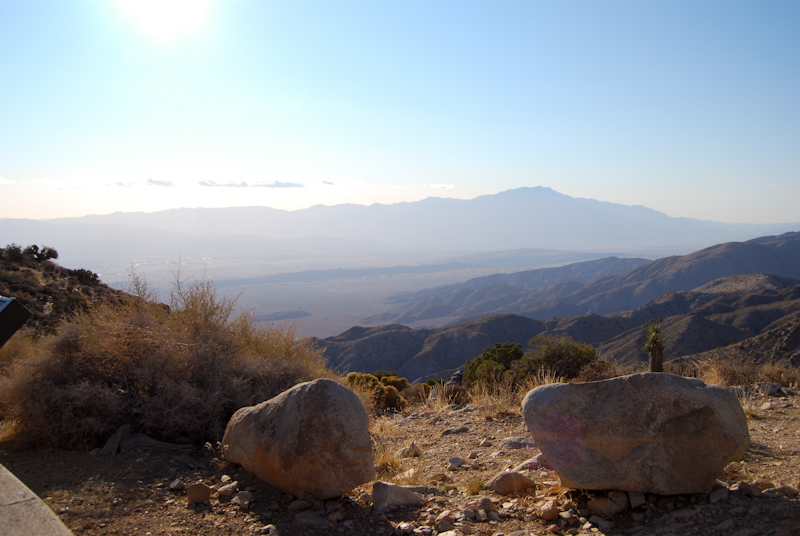 The hubby and I had the privilege and honor to be able to sit down with Wayne Static and his wife, Tera Wray Static one bone-chillingly cold winter day in Joshua Tree National Park to talk about not only his new album, but his philosophy on food. My hubby covered the album, and I covered the food. To honor the rockstar’s love of the cheese and toast combo, I whipped up my own version, but we’ll get to that later. Onwards to the interview!

Here’s what Wayne and Tera had to say:

Devil Wears Parsley (DWP): Awhile back I remember you mentioning that you were a vegetarian. Are you still a vegetarian?

Wayne Static (WS): Yeah, I’d say loosely I’m a vegetarian. I eat fish. I eat eggs, I eat cheese, but I don’t eat flesh of animals that walk the earth, I guess that might be one way to put it. I hate milk and most diary products and that ya know. But I like cheese! I kind of – I eat what I like, and I don’t eat what I don’t like. I’m not like some big activist, or something, ya know?

DWP: I felt like when Cannibal came out, that it was kind of like a wink and a nod to that?

WS: Yeah, ’cause like meat really grosses me out, especially when it’s on a bone, and stuff, and you’re all like gnawing on it. I used to eat meat. Ya know, I grew up eating meat, and I didn’t stop until I was in my early 20’s, but I see people, and I’m like “Wow.”

WS: Yeah, like my wife! [laughs] That’s only one step away from being a cannibal. What if you’re lost somewhere, and came across a freshly killed body, would you eat it to stay alive? Would you Tera?

WS: I wouldn’t either. [laughs] I’d rather die!

DWP: Do you have any favorite foods that you have to have in the house at all times?

TWS: Yeah. I can’t eat that crap though. It’s just bread and cheese. That’s what I’d eat when I was like, seven. I like to have Singapore noodles ready to make at any time I want, but it’s a very long process, so usually by the time I get done making it, I’m starving to death and I can’t eat anything ’cause my stomach shrank so much.

WS: Yeah, I mean, I like to eat good food, but I’m not one of those people that has to. I can get by on cheese sandwiches for weeks, and not even blink an eye. I dunno.

DWP: So, Tera, it sounds like you do a lot of the cooking?

TWS: I do all the cooking, unless I’m deathly sick [Wayne will] pop a can of Campbells soup for me. [laughs]

WS: I made you pancakes this morning! [laughs]

TWS: Yeah well he makes more breakfasts, ’cause I’m not a morning person, and I just can’t get motivated at all, and he has to do that stuff. But usually [it’s like] English muffins; he was very sweet today by making pancakes. [laughs]

WS: We were out of English muffins. [laughs]

DWP: So do you have a specialty that you cook for your friends or your family?

TWS: I like to try new things all the time. My favorite app on the iPhone is this “All Recipes” app, and it’s got this little spinner thing, and you push the button, “give me a new recipe”, and I’m like, “Yes!” But I need my kitchen to be finished first before I can try anything else, because it drives me insane. [laughs]

DWP: I hear ya. So when you guys are out on tour, do you have any favorite cities, or favorite restaurants you’ve got to hit up?

TWS: [sighs] Vegas, but we usually don’t have time to hit the restaurants we like.

WS: Yeah, I love eating in Vegas, man. There are some great places there. And I love really good service. There are a couple great places down here in Palm Springs that you can see from right here. [motions to the front of the truck, where we were overlooking Palm Springs from Key lookout in Joshua Tree National Park] [laughs]

WS: But usually on tour, we don’t really have time to go eat anywhere. And then if you do, there’s some fans that come by, and bother you, and kind of ruin the experience. Most of the time we eat on the bus. We just get groceries brought to the bus, and just make food on the bus most of the time.

DWP: I’ve got just one last question for you. What is your favorite cocktail?

WS: My favorite cocktail, oh my gosh. Um, yanno I’ve gone through a lot of phases, and right now I’m in the phase where I like either Patron Silver just straight, or Crown Royal on the rocks, or maybe with a splash of Coke. And that’s kind of where I’m at right at this point. I don’t like all the other mixers, all the sugar, and all that. It just fills you up. So that’s where I’m at right now.

TWS: I only drink four drinks, period. The mixers I guess would be Surfers on Acid, which is Jager, Coconut Malibu Rum, pineapple juice, with a splash of cranberry. And a Mudslide. [laughs] I don’t know if you want to call that a mixer! [laughs]

WS: So basically a milkshake with some Kahlua in it. [laughs]

TWS: I know, I like sweet stuff. The only other two things I drink would be port wine on special occasions, that’s aged to a nice four years. Old like my old man. [laughs]

WS: She likes her wine old, like her men.

TWS: And then Nigori Sake. But ever since my bartender, I can’t even say it. I feel like I’m going to vomit.

WS: Yeah, Tera’s not a big drinker. I drink enough for both of us. So, let’s crack open that whiskey right now! [laughs]

… and boy did we crack open that whiskey! A great time was had by all.

So the whole cheese and toast thing got me thinking about a more fancy version of the combo. I’ve been diggin’ goat cheese lately, so I knew that would be part of the ingredient list. I thought a smoked cheddar and creamy edam would all play nicely together. (Only the goat cheese was from Wisconsin. I tried…) 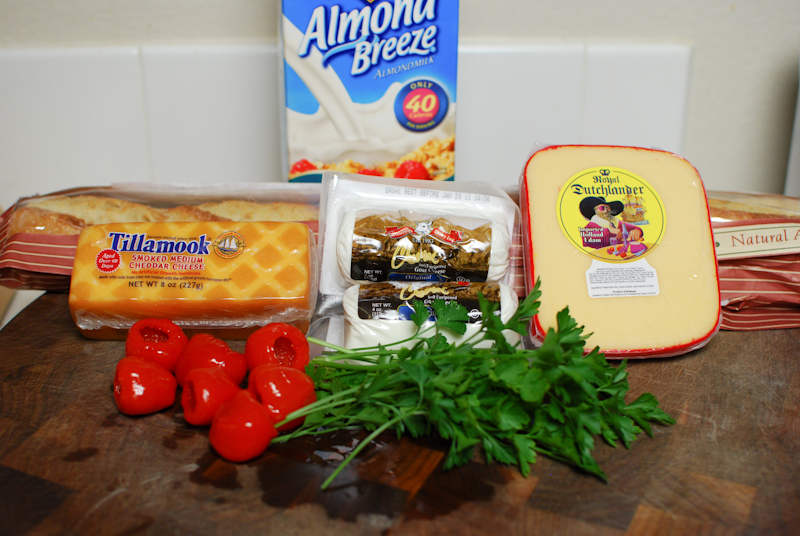 The parsley and peppadew would add a little herby, spicy flair to the mix too! 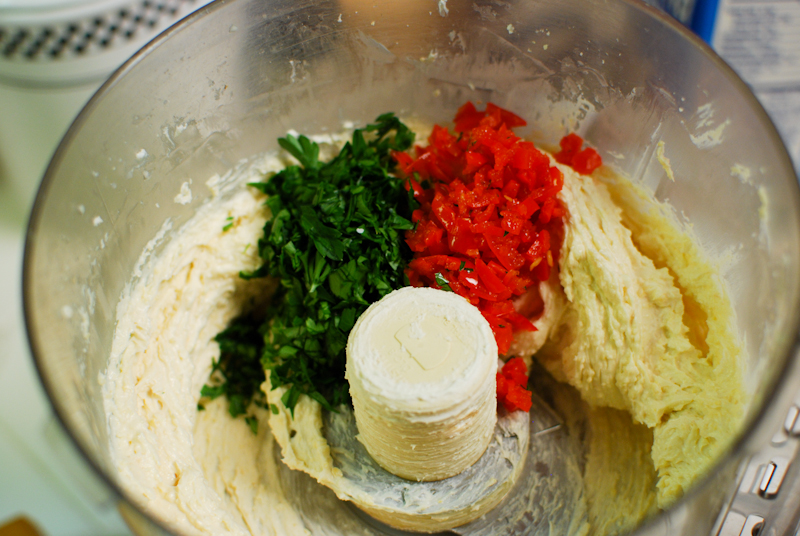 Toast the french baguette slices, and top with the cheese mixture, adding the peppadew slivers and parsley leaf as a garnish! 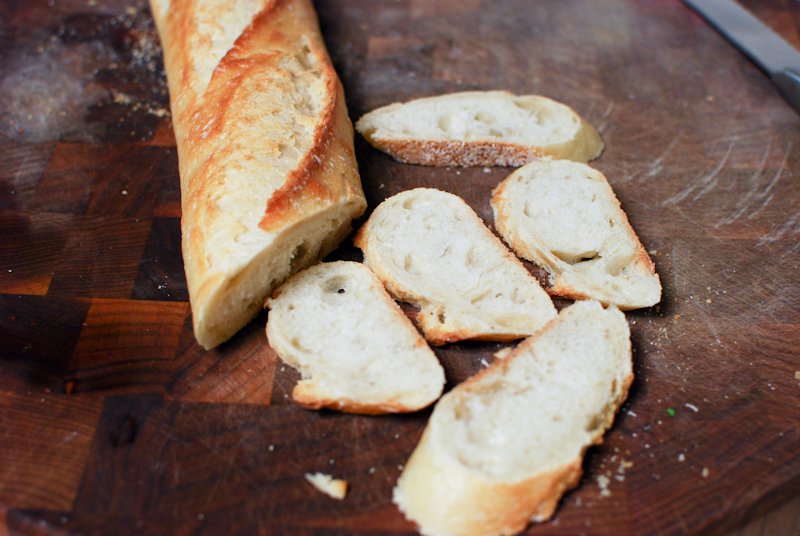 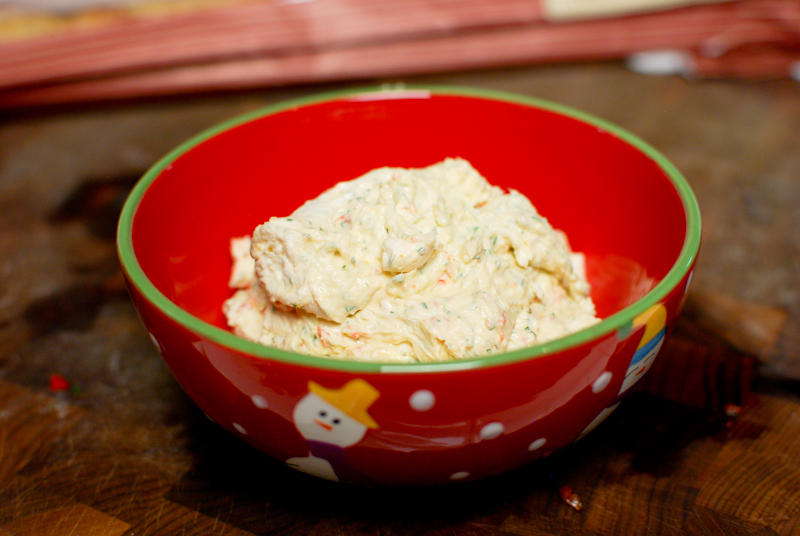 That’s it! You’ve got a great little snack that’s perfect for your next holiday party – or any time, really! 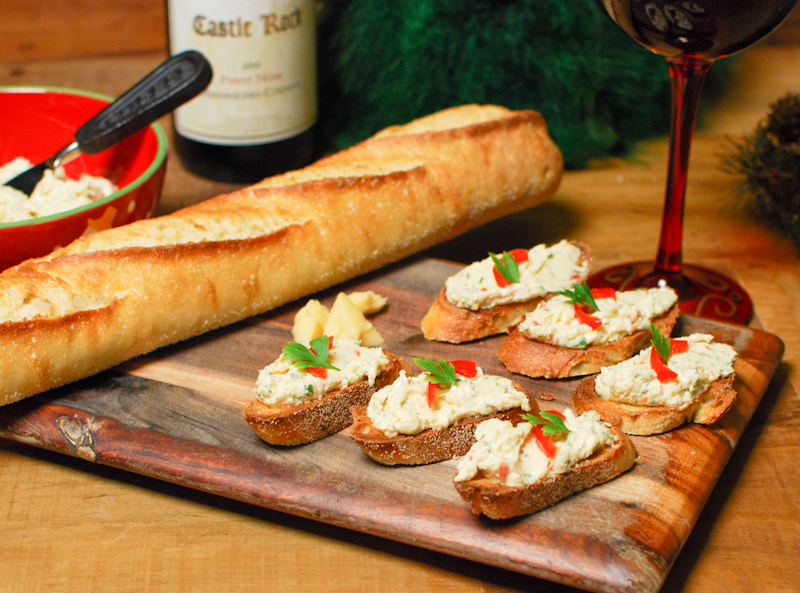 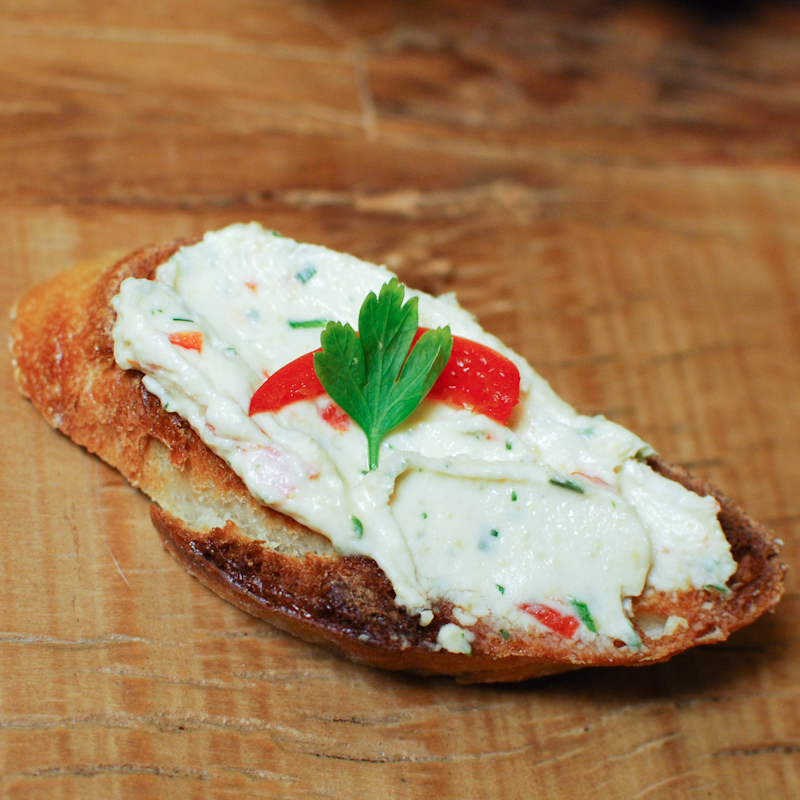 By Natalie Wiser-Orozco
Published: December 14, 2011
A cheese spread worthy of your next holiday cocktail party!


Mix together in a food processor the cheeses, balsamic vinegar, and milk until very smooth. If the mixture is thick, add more milk until desired spreading consistency. Add in parsley and peppadew peppers until just combined, and reserve to a bowl. Cover and refrigerate until ready to use. While the mixture is chilling, preheat your oven broiler. Cut the baguette into ¼ inch thick slices on a bias, so you have nice oval disks, place on a cookie sheet, and pop them under the broiler until nice and toasted on both sides. Spread cheese on the toasted baguette(crostini), and garnish with a sliver of peppadew pepper and parsley leaf.

P.S. If you’d like to hear the entire interview, I’ll be posting a link whenever the production is finished!