I LOVE the farmer’s market in the summertime!! Well, I love the farmer’s market any time of the year actually. It’s just nice to see the different veggies and fruits come in with the changing seasons. Angel and I spied these beautiful round squash at one of the booths, and they started talking about stuffing them. Shoot, I love stuffed ANYTHING, so I whipped up my own {lighter} version. 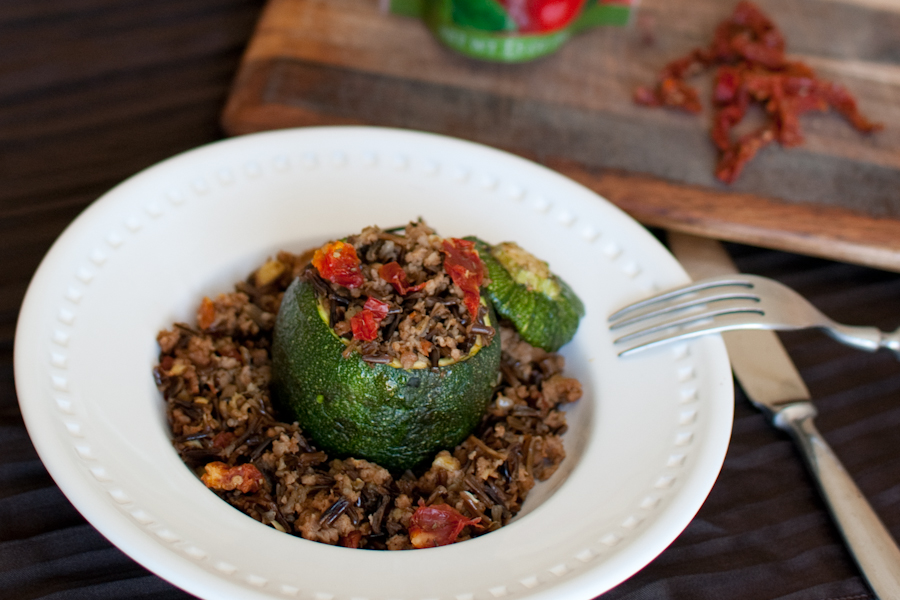 Bella Sun Luci Sun Dried Tomatoes – Italian Style was one of the items in the goodie bags I received from Camp Blogaway. Shortly after, I got an email from Lisa Mooney of Mooney Farms. I love their story and their tomatoes! (everyone should know by now that I get weak in the knees for tomatoes) Their business is mainly tomatoes now, but they started out as kiwi farmers!! Isn’t it just weird and crazy where life takes you sometimes? That’s one of the things that really hooks me in with food. There’s always a story attached to it. In the sense of companies trying to connect with their audience, if you share your story and share it well, it will hook people in, just as Mooney Farms and their Bella Sun Luci Sun Dried tomatoes did with me!

They sent me their products, and since then, I’ve been racking my brain trying to come up with a clever recipe worthy of their product and their story. It’s not because they paid me either… I didn’t get paid at all actually, but I just really like their stuff! While I’ve been racking my brain, I’ve been using their tomatoes in just about everything I’ve been making! I got saucy with their Zesty Sun-Dried tomatoes, making a tomato/red pepper chile sauce, combined their bruchetta with goat cheese, and spread that on toast, and I love tomatoes so much that I find myself just munching on the Italian Style Sun-Dried tomatoes as if they were raisins!

They are really so versatile, have TONS of lycopene, and we can’t forget about that FLAVOR! If you’re dieting, this is a great way to add flavor without the fat. I personally like to add them to a dish that will be moist, that draws out the tomato flavor into the whole dish. That’s where the Stuffed Round Zucchini comes in! I made Chinese black rice with onions and sun dried tomatoes, combined that with seasoned ground turkey, and stuffed those puppies ’till they couldn’t be stuffed any more! I topped off the dish with even more sun dried tomatoes to really drive that flavor home, and it was a success!! 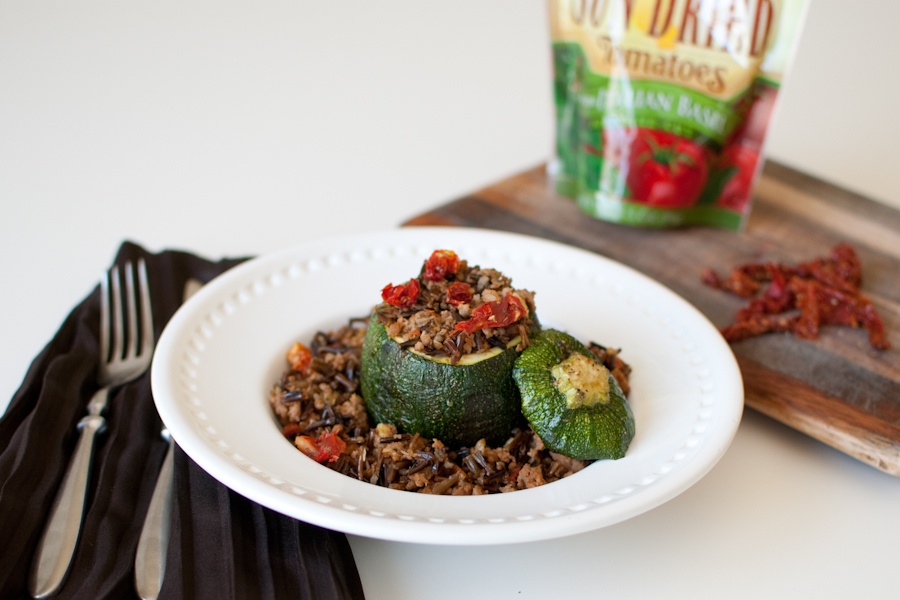 You’ll have way more stuffing than will be able to fit into those adorable little zucchini’s, but who cares, really?! When you stuff things, isn’t it really about THE STUFFING anyway?? I agree that it IS a great way to get the veggies in. Bell peppers, round zucchini, cabbage leaves… If my mom hadn’t made stuffed bell peppers when I was a kid, I don’t think I’d ever have eaten a bell pepper. I always disliked the pepper, but that was dinner, and I ate it along with everyone else at the table, and now I love bell peppers. POINTS FOR MOM! It’s all a ploy, but hey it works! The zucchini is really great anyhow – my husband (and I) love it by itself, so it’s a WIN WIN! If you can’t find the round Zucchini’s, don’t fret! Get some regular zucchini, and hollow them out making zucchini boats! YUM!

What’s your favorite veggie to stuff? 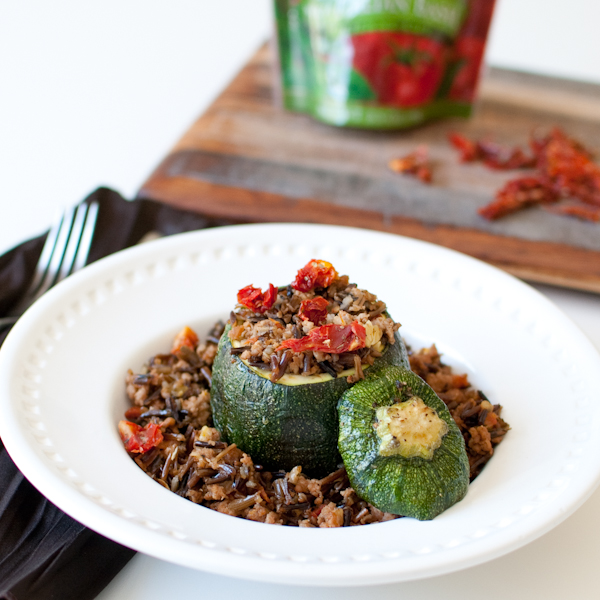 Preheat oven to 375°F. Heat 1 tablespoon coconut oil in a pot over medium heat. Add the diced onions and tomatoes, and saute until the onions are translucent, about 7 minutes. Add in the rice and toast for about 1-2 minutes, and then add the water and ½ teaspoon of the salt. Turn the heat up to high, cover, and bring to a boil. Once boiling, reduce heat to low, and simmer for 40 minutes. While the rice is boiling, heat a pan over medium heat, and add ½ tablespoon of the coconut oil, turkey, ½ teaspoon salt, pepper, Italian seasoning, and paprika. Break up the meat, and cook until browned, about 10 minutes. While the rice continues to cook, cut the zucchini tops off, and reserve. Hollow out the zucchini using a spoon with a sharp edge. A mellon baller works fantastic for this too. Dice the leftover zucchini, and add to the turkey. When the rice and turkey are finished cooking, combine the two, and then stuff the hollowed-out zucchini. You’ll have stuffing left over, so reserve in a dish, and keep warm. Transfer the stuffed zucchini to an oven-proof baking dish, spray with a little olive oil and sprinkle with a touch of salt. Bake at 375°F for 30 minutes, until the zucchini is just tender, but still has a little crunch to it. Serve with the extra stuffing, and top with more diced Bella Sun Luci Sun Dried tomatoes!