Being invited to the Produce Marketing Association‘s (PMA) Fresh Summit Convention + Expo has got to be one of the highlights of the year for me. It all started in May with Patti Londre and Camp Blogaway. Had it not been for the connections and friendships made there, this fantastic event and opportunity would have passed by without a sparkle of awareness.

A couple months ago, Patti and the Idaho Potato Commission bestowed upon a handful of bloggers all access press passes to Fresh Summit. Fast forward to the week before the expo, and I was a bundle of nerves. Emails came pouring in from seemingly everywhere, from small mom & pop operations to the corporate giant Monsanto. One of those emails piqued my interest immediately, offering the opportunity to interview Food & Wine’s best new chef, Los Angeles restauranteur, and Perú native, Chef Ricardo Zarate.

I knew nothing about Perú, except that it was located in South America. This story starts out much like my knowledge of Thai cuisine years ago – I never knew it existed, and to this day remains my favorite, even over my beloved Mexican obsession. Now that I’ve been enlightened to this fresh new cuisine, I have a feeling it will give my established favorite a run for its money.

When I met up with Chef Ricardo at Fresh Summit, I wanted to pick his brain on all things Peruvian since I jumped in completely green. I wanted to know the comfort foods, the available produce, and where I could get authentic, real cuisine.

[The Devil Wears Parsley (TDWP):] Can you tell me some of the staple cultural dishes? What would be a typical breakfast, lunch and dinner in Perú?

[Chef Ricardo Zarate (CRZ):] First of all, Peruvian food has a particular flavor – it’s called the Peruvian flavor. The breakfast in Perú is very typical. You have the sandwich with the tea, the coffee, the milk, and that’s very normal, but the most popular thing for breakfast in Perú is brunch. That’s where we’re going to have the sandwiches with the pork belly and chicharron – we call it Chicharron de Chancho. Then we have the tamales, and steaks, we call them Lomito Saltado, which is steak sautéed with tomatoes. For lunch in Perú, ceviches are very typical. There’s a lot of fresh fish, especially in Lima. The main meal is going to be lunch. Dinner is more light. People stay and cook at home for dinner.

[TDWP]:Oh, ok! Alright! So, what are the major food exports that Perú distributes?

[CRZ]:We have avocados, asparagus, and then we have the tangerines and artichhokes. Perú has a very big variety of produce. People are getting to know, and become more comfortable with it. It’s very good quality. We have an incredible biodiversity in my country, and that’s what makes it unique. But especially right now the avocados, asparagus, tangerines are available.

[TDWP]: And they distribute all throughout the world?

[CRZ]:Yeah, and more produce will come later on, but these are the ones available right now.

[TDWP]:Now, I know you have some restaurants of your own. How many do you have, and can you describe them?

[CRZ]:Right now I have two restaurants, and I’m about to open my third restaurant. The first one is in Beverly Hills called Picca. The first one, Picca, is a Peruvian restaurant with Japanese flair. We use japanese techniques and touches, so it’s a really amazing concept.

The next restaurant is Mo-Chica, which is in downtown Los Angeles, and that one is traditional Peruvian food. Obviously, it’s done my way, so it’s modern. I would describe it as Peruvian food, but in a competitive way, you know, two different cuisines, but traditional.

[TDWP]:Oh, ok, cool! So, what does Picca and Mo-Chica mean? Does it have a particular meaning in your language?

[CRZ]:Yeah, yeah yeah! The idea of Picca is a Peruvian tapas bar, and Picca in Spanish means “to pick”, also “spicy”, so we’re playing with the words, you know “to pick” or “to nibble”. Mo-Chica is because, again, it’s traditional Peruvain food. Mo-Chica is a culture from Perú before the Incas, and has a very strong historical meaning. They used to be powerful more than 2000 years ago, so I took that name, and I put it into my restaurant.

[TDWP]: So, now you had a test kitchen, can you tell me a little bit about that?

[CRZ]: Test Kitchen was created three years ago before we opened Picca, and actually we are not running it anymore. It was a popup restaurant and we were changing chefs every day.

[CRZ]: Yes, changing chefs every day. So, every day we were bringing in a new chef, and cooking a new menu. It was a very fun concept.

[TDWP]:Do you think you’d do it again?

[TDWP]:No? It sounds like it was a lot of work!

[CRZ]:Yeah, it was! It was fun. Actually I’m not involved anymore, so they continued, but I think I’m done. That’s it, one time.

[TDWP]:So, what’s on the menu today here at Fresh Summit?

[CRZ]:Today we have a variety of produce. We started with a cocktail based on Peruvian grapes, called Pisco Sour. Pisco is a Peruvian brandy, but it’s made from grapes. It’s very famous in Perú. Then we have a beet salad with an orange & tangerine dressing and aji amarillo, which is a Peruvian pepper. We have scallops with an aji amarillo aioli on top. We have asparagus with Parmesan cheese. We also have the ceviche, which is very traditional with the Peruvian citrus. Yeah, we have a variety of produce, you have to try it!

[TDWP]:Oh yeah, I plan on it! That’s awesome! Thank you so much!

It was really great to chat with Chef Ricardo Zarate about the produce Perú has to offer, and how he’s spreading the word about not only the produce, but the cuisine too!

Here, we have some of the offerings of Chef Zarate for Fresh Summit, starting with the beet salad with burrata cheese and orange-aji amarillo dressing. It was so great! I’m a beet fan anyway, but that dressing took it over the top! I have to check out where I can get those aji amarillo peppers! Next up is the Scallops Anticucho with a aji amarillo aioli and wasabi peas. The scallop was perfectly cooked! Yum! These appetizers paired with the very strong, tart, lovely Pisco Sours were a match made in heaven, and a welcome break to the pavement pounding all morning. I’m wondering why I ever left the Perú booth at all!! 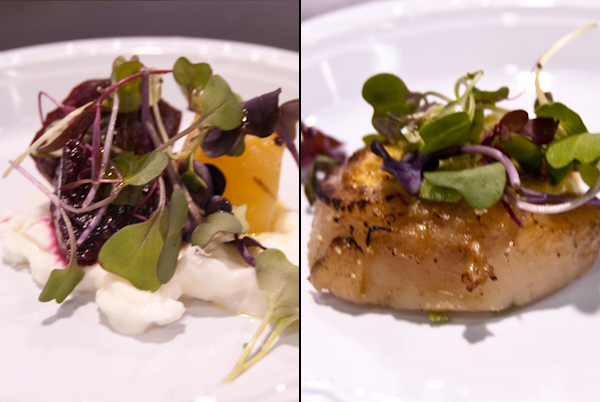 I didn’t get the opportunity to have these, but DAMN these look good! The asparagus has shaved Parmesan, and again, the aji amarillo aioli. Perú is the world’s leading exporter of asparagus, and it is available ALL YEAR ROUND because of the incredible coastal farmlands and climate. 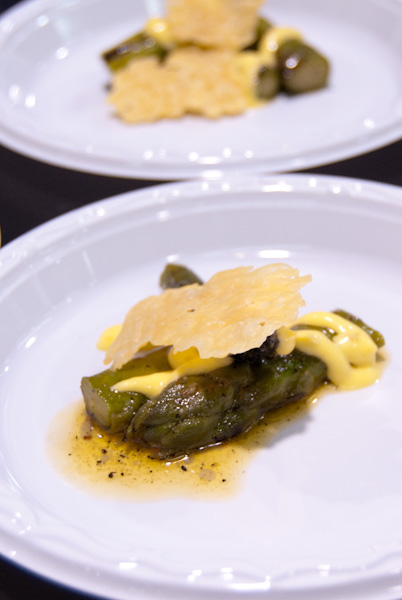 You may be thinking, “Why should I buy Peruvian produce over my own country’s produce?” A very valid question to be sure, which was brought up in my talk with Ricardo Romero Talledo, who is the Trade Representative for Perú in the West Coast. I’m always encouraging you to get to your local farmer’s markets, but I also live in California, where there are an abundance of these markets to seek out. Other parts of the country are not so lucky. Ricardo explained that the demand for not only avocados, but other produce, has been increasing so much, that there really is room for everyone! So, if you’re not able to get to your local farmer’s market, really pay attention to those little sticker’s and labels on the tangerines, avocados, grapes, asparagus, oranges, grapefruits, limes, etc., and see where it comes from!

Because of Perú’s location, they pride their produce for their substantial nutritional value and incredible flavor. Besides that, they really care about the land, their workers, and their product. Peruvian growers are certified in good agricultural practices such as USGAP and GlobalGAP. The exporters are committed to high food safety standards such as HACCP and GMP.

Many thanks to Chef Ricardo Zarate & team for taking the time to sit down and talk with me. I hope to seek out some classic Peruvian cuisine and share it with you in the near future! 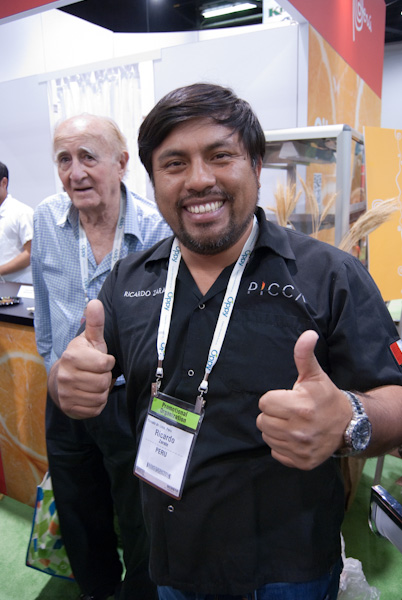