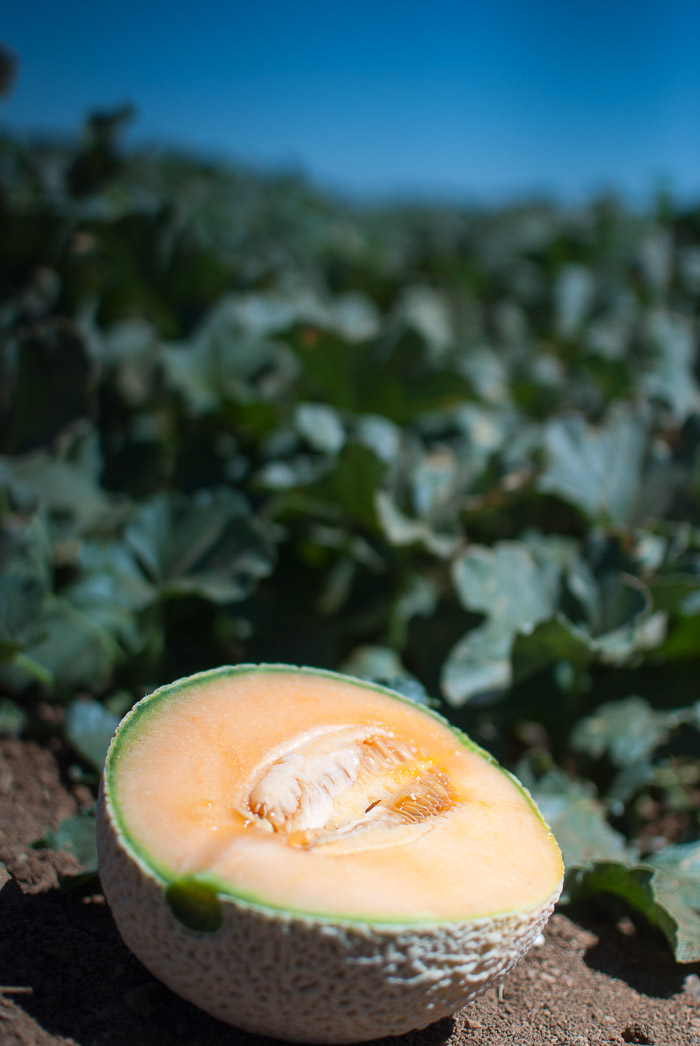 Have you ever felt palpable magick in the air around you? Have you ever felt the delicious grounding feeling you get when you stand barefoot in the dirt, wiggling your toes? Well, I didn’t wiggle my toes in the sand because I had my Doc Marten’s on, but I could feel it. I could feel the abundance of super-life on Joe Del Bosque’s farm. The sky was clear, with this electric blue that was ENERGIZED!

Jump To: How To Cut A Cantaloupe 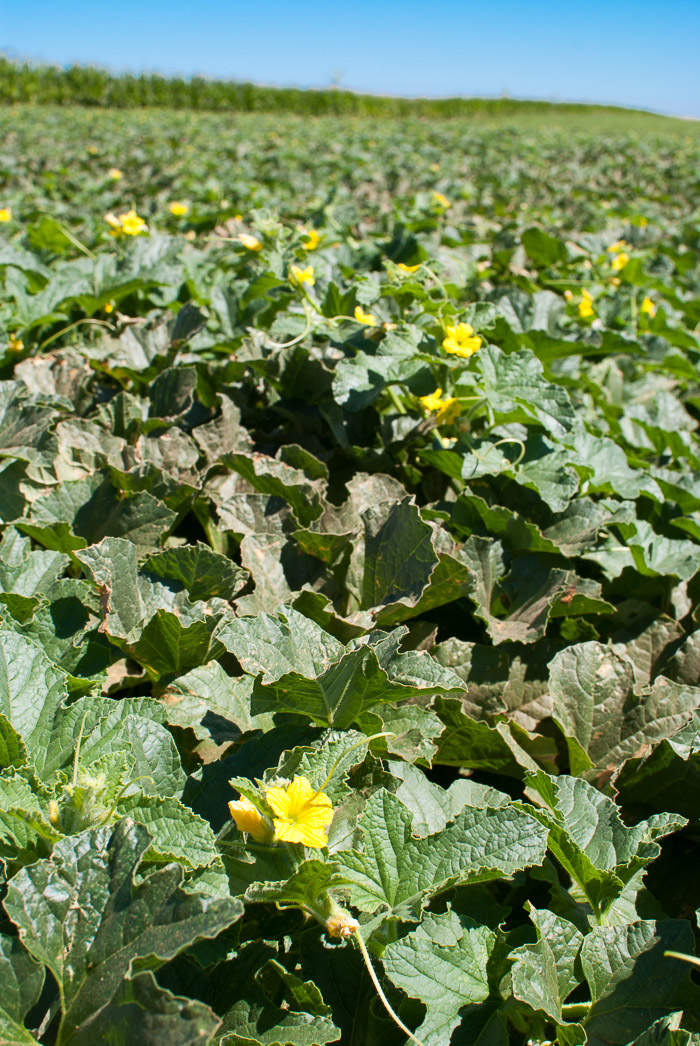 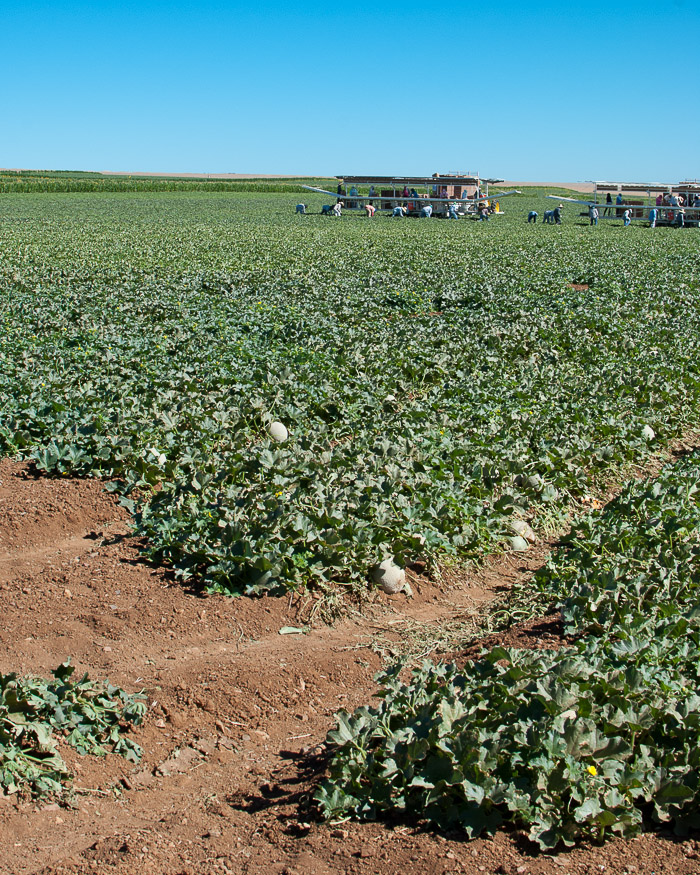 We arrived on the farm, driving down a dirt driveway that was flanked on one side by magestic almond trees. They were large – about 10 years old, I’d wager, and their canopies were large enough to shade everything beneath them. Oh, what I would give to go back and walk underneath these magnificent beings! You could see their fuzzy outer casings protecting the not-quite-mature nuts. We get to the main office, and it was rush from the get-go. It turns out that Joe had some impromptu buyers of Bijou watermelons from Whole Foods, and he had to meet them, because you always gotta hustle, yo! 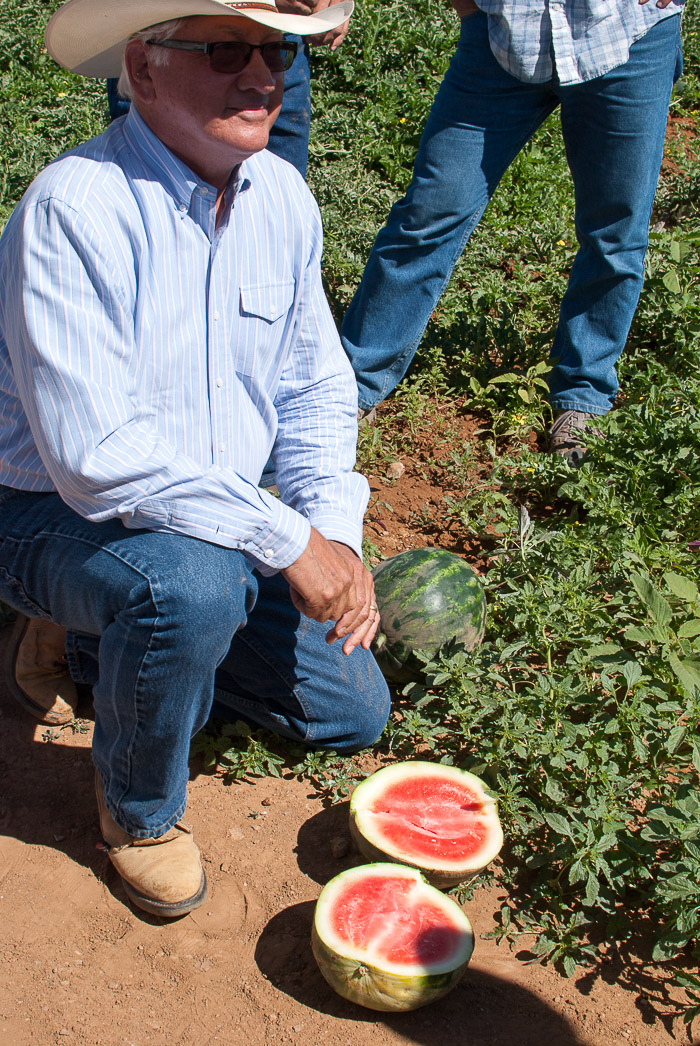 We drive up to the organic watermelon field, and it’s magnificent! You can see that this watermelon isn’t quite ready. When the watermelon is ripe, the white membrane you see going down the middle will disappear, and the rind will become less white. The plants have beautiful yellow flowers that the bees clamor over. 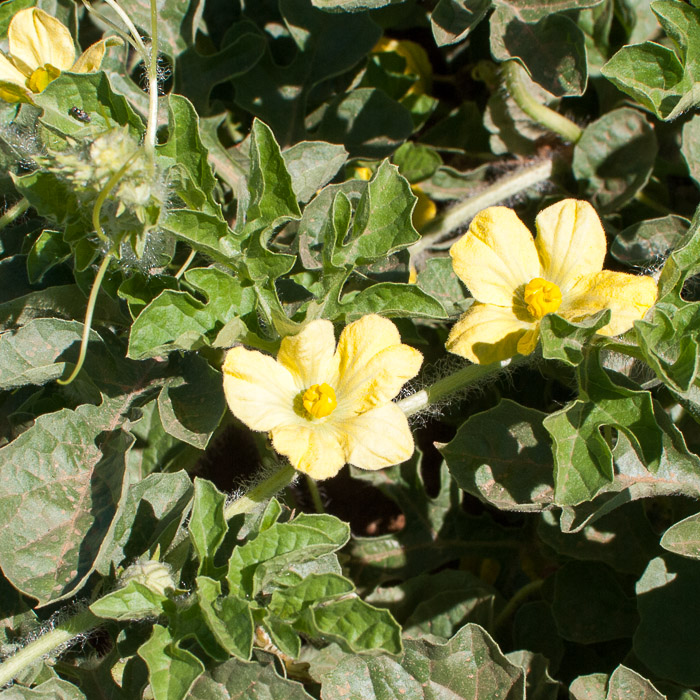 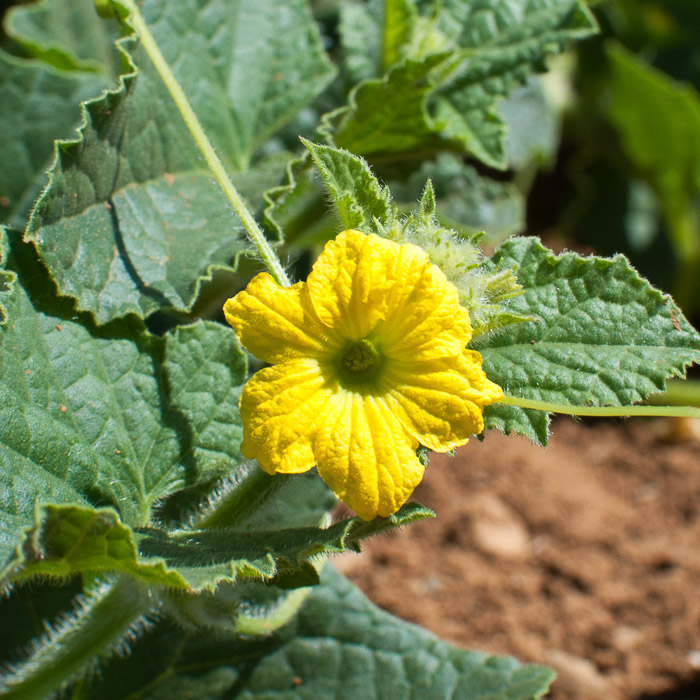 Oh yeah, the bees. I love bees, and they are necessary for plant pollination – I know all that, but they still scare the shit out of me. I tried not to let my fear manifest itself, but I was a little nervous. They have bee boxes at different intervals throughout the farm to help the pollination process. Amazing! 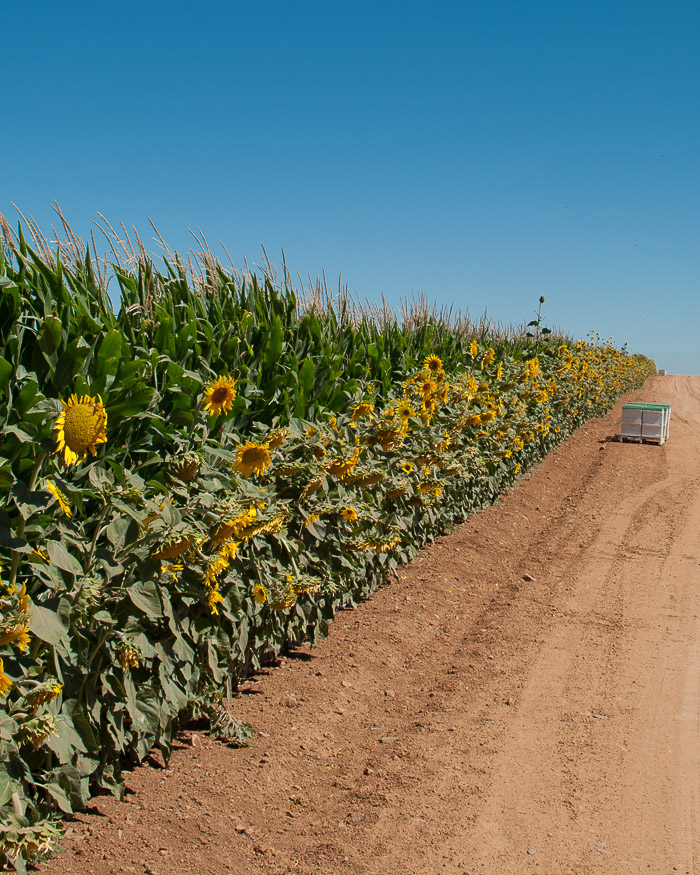 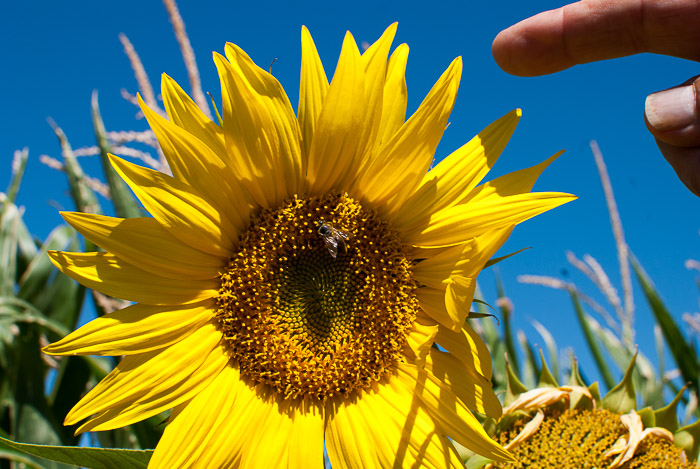 So, you may be wondering if we’re on an organic melon farm, why are there corn and sunflowers growing? Well, we’re on an organic farm, which means they have to use means other than pesticides to control pests. Basically, the sunflowers and corn attract the good bugs that kill the bad bugs. The Trichogamma Wasp for instance, lives on the nectar of the flowers, but here’s the morbid part: They will lay their eggs on the bad caterpillars that destroy the melon crops, and become parasites that live off them, eventually causing them to die, thus protecting the crop.

Then we have another voracious predator – the Lacewing. They have a slender body, and lace-like wings. These little lovelies lay their eggs in the crop, and that’s where the real work happens. The eggs hatch into larvae, and the larvae eats the crap out of aphids and other damaging pests. The adults seek shelter in the corn.

Besides using insects as pest control, Joe also uses natural things to control different pests and diseases. Bacillus Thuringiensis is a naturally occurring bacteria that is a natural disease for caterpillars. Neem oil is used as a natural pesticide – it has antiseptic properties that help control pests. Also, sulfur is used to control mites and mildew. 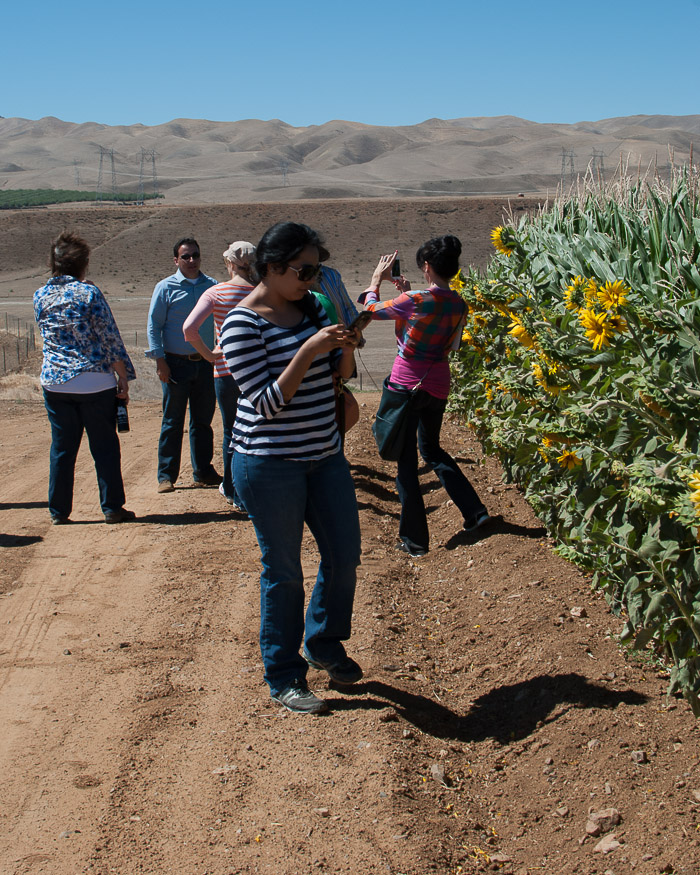 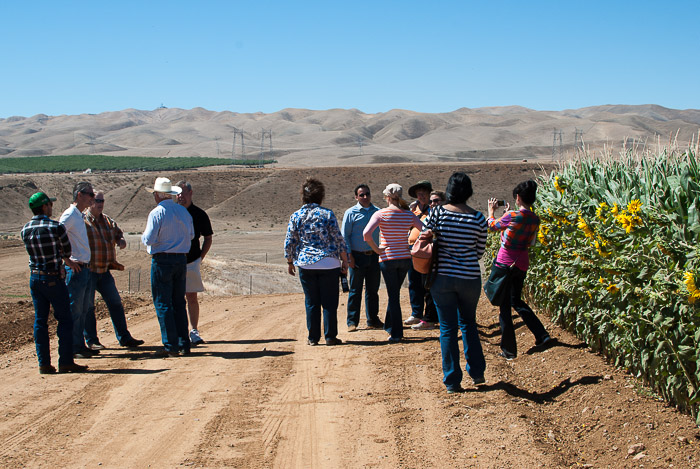 The Drought and How It Affects The Water Supply

We have to get into some serious shit here, man. The California Farm Water Coalition sent me up to Fresno last weekend for a reason, and this is it right here: Raise awareness, and help educate on the state of water affairs on this great state of California. The image below is of a field that could have been planted this year, but wasn’t. It wasn’t planted because there wasn’t enough water. This is a direct effect of the current drought that California is experiencing right now. 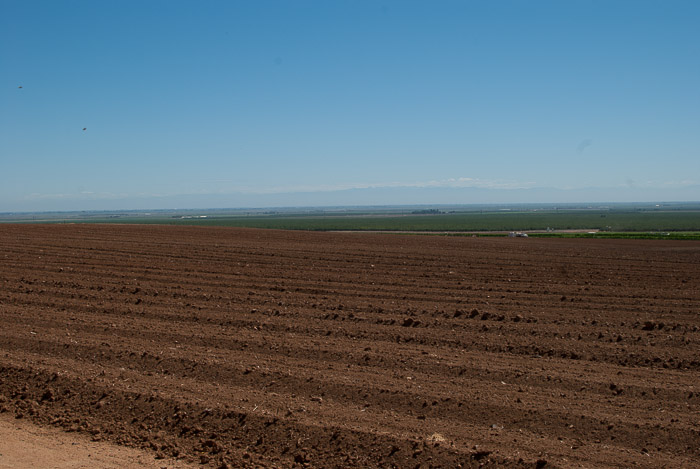 So, when you’re going on a road trip, and see crops that are nice and green – don’t automatically assume that everything is fine. Take a look at everything around you, and you will undoubtedly see that there are barren swatches of land, where crops could be growing but aren’t. In some instances, farmers have to buy their fresh water at a premium to keep their crops alive. These farmers are just like you and me – we have to work for our money, and when the water prices go up, it’s impossible for them to absorb that cost. The price of food goes up as a result, and it’s unfortunate, but the cost is passed onto the consumer. 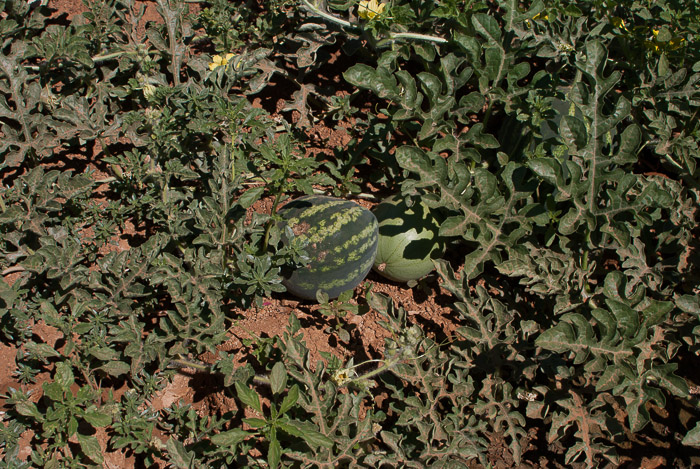 Because of the drought, farmers have found ways to maximize their yield by employing different irrigation methods. An average cantaloupe takes 60 gallons of water to grow and reach maturity. So, the farmers reduce the amount of evaporation and weed growth by using a watering method called drip irrigation. The drip lines look like black tape, and have microscopic holes that allow the water to escape. This tape lets out a specific amount, so that the farmer can measure exactly how much water the crops are getting. Sometimes the drip irrigation is on the surface, but for maximum efficiency, they bury it, reducing the evaporation and weeds even more. An interesting fact from Joe: Regardless of soil, if you irrigate properly, you can get a good crop. Pretty positive, right?

When they go to plant their seedlings that are grown in a greenhouse, they use plastic cover that also helps retain moisture in the soil. So, even despite this drought we’re in, farmers are finding ways to maximize their water usage. Another fun fact about Joe’s farm: They used to get 650-700 boxes of melons per acre. With this increase in water efficiency, they’re now getting 1000 boxes per acre! 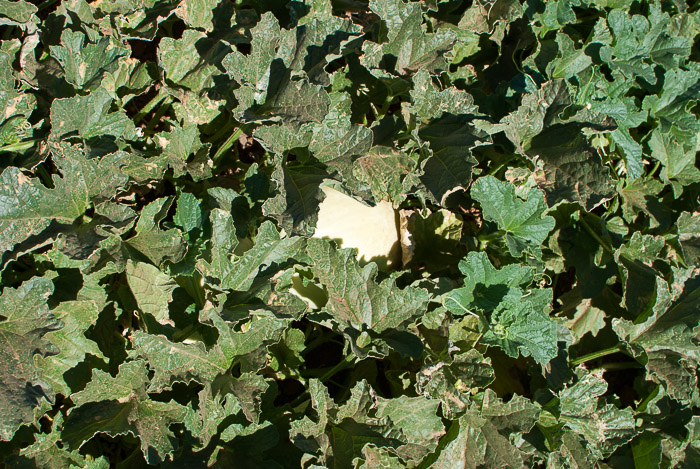 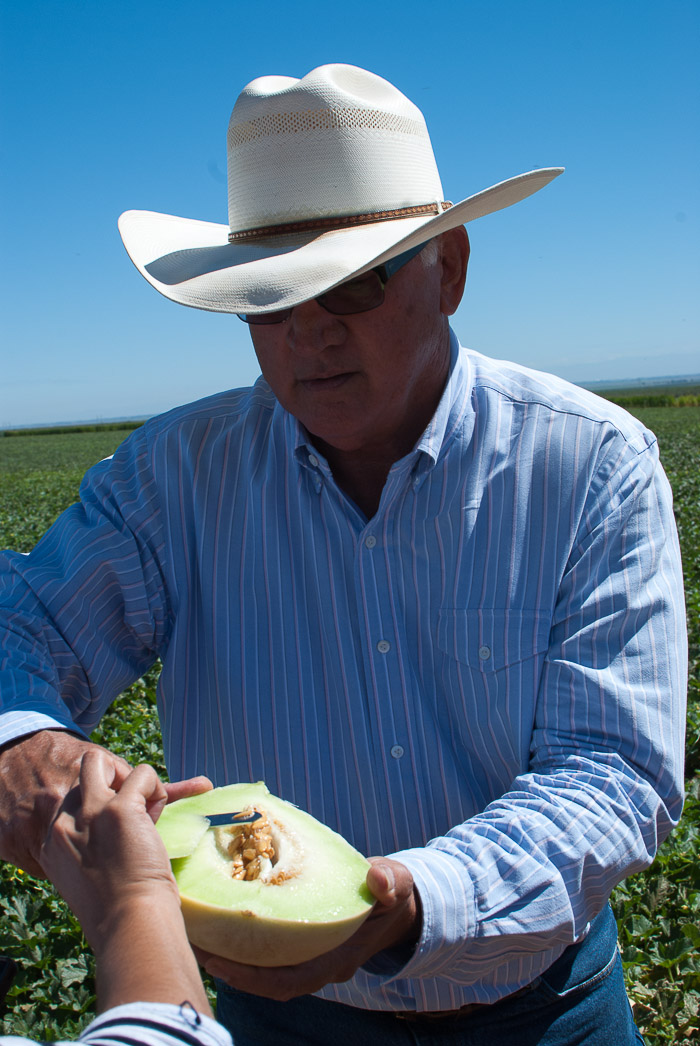 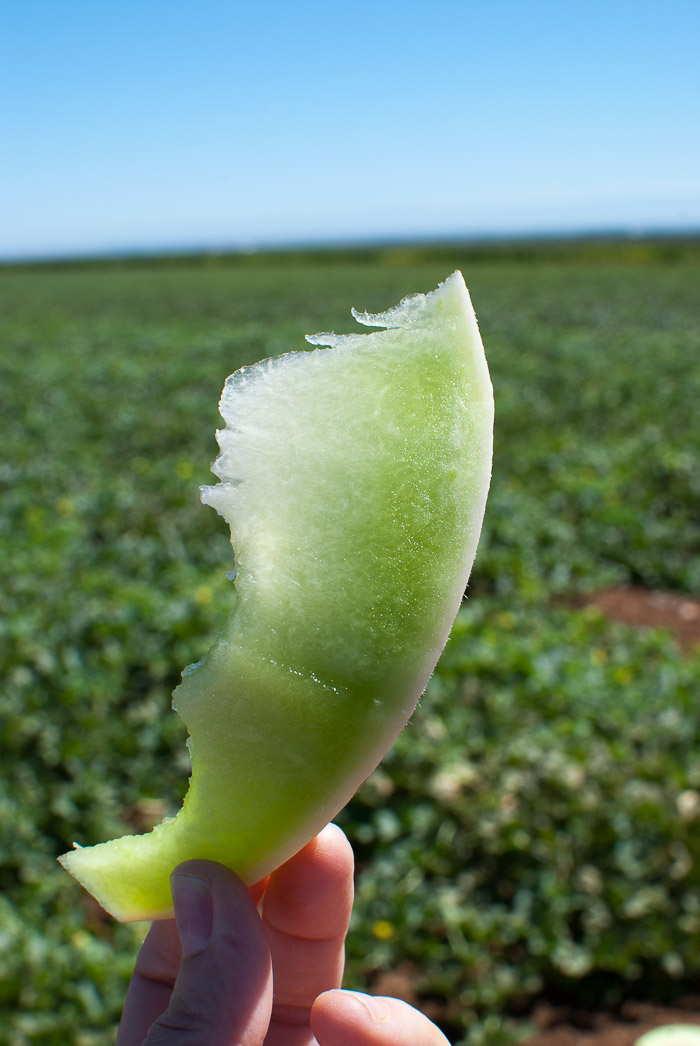 Fertilization also plays a large role in organic farming, as you can’t use any chemically derived fertilizers! You’ve got to use natural fertilizers if you’re to become a certified organic farmer. They do a few things – first, they use a fish emulsion. Second: they plant cover crops such as peas, beans, and vetch during the winter. These legumes pull nitrogen from the atmosphere, and fixate in the roots. You remember the corn and sunflowers from earlier? When the winter is over, they take the cover crops, corn and sunflowers, shred them, and add them back to the ground. Absolutely genius. 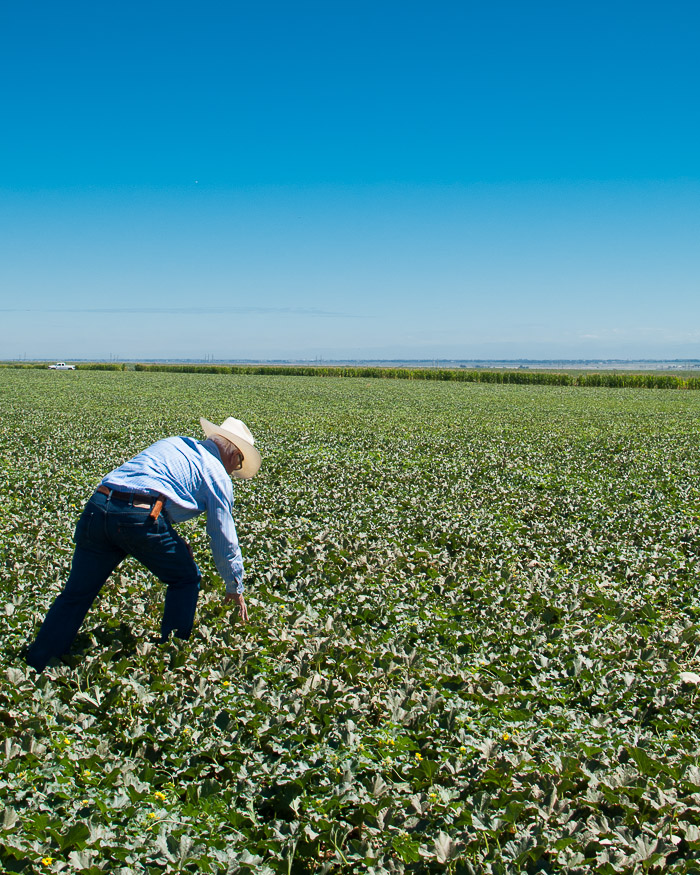 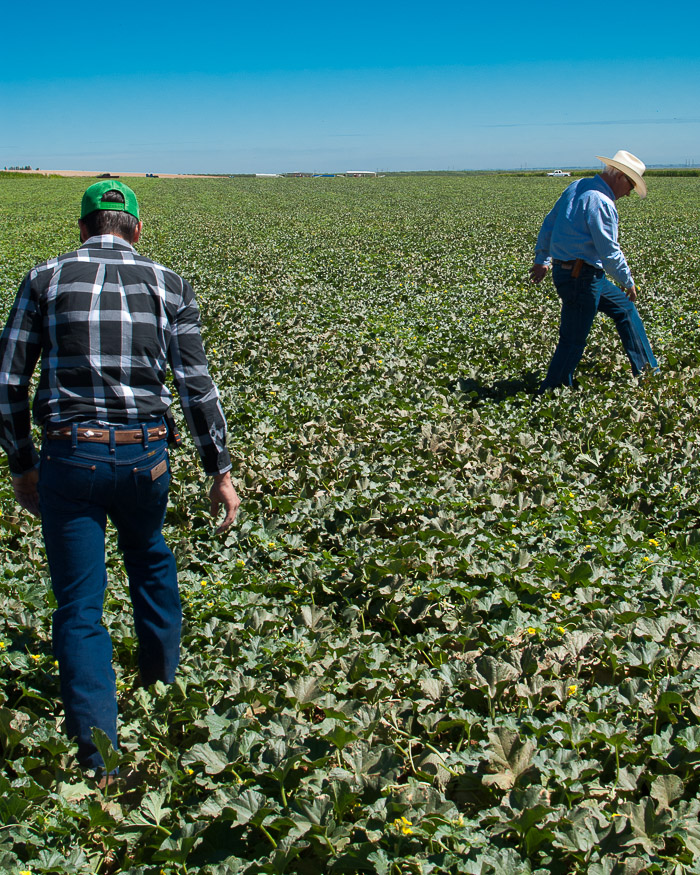 Here, Joe and his intern are searching for the perfect cantaloupes, so we can try them fresh, right on the farm. When you’re choosing a cantaloupe at the store, here is what you should look for: 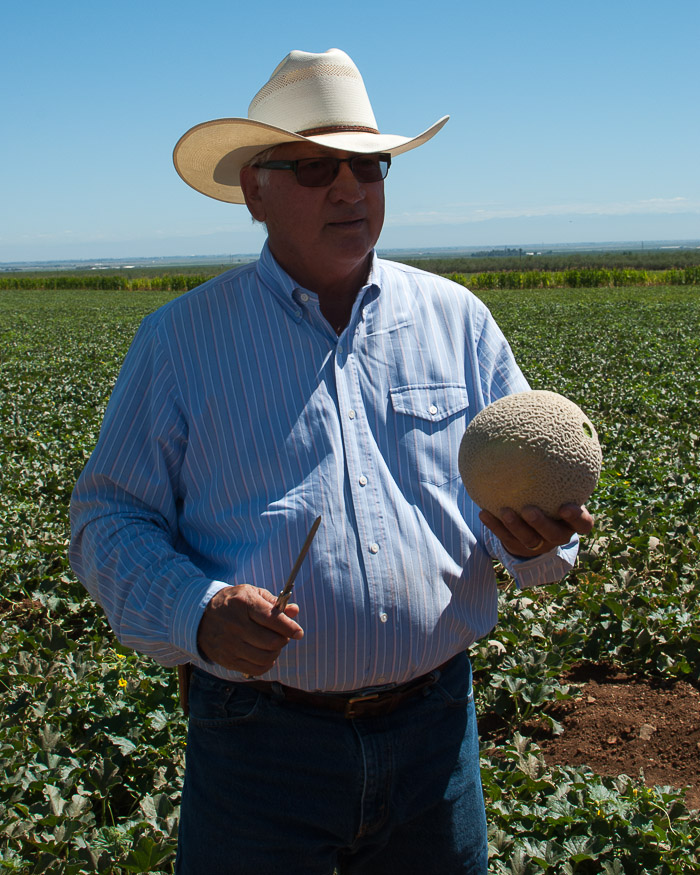 How To Cube A Cantaloupe

I know this is what you’ve been waiting for! So, there are many ways to eat a cantaloupe, but these two methods of preparing them are my favorites. I present the cube: 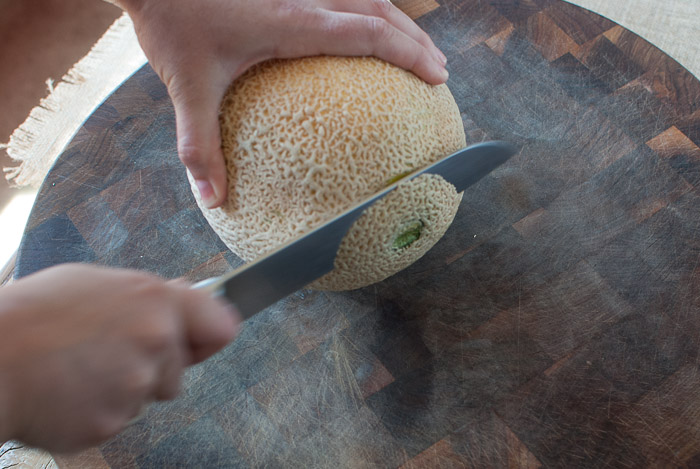 To cube a cantaloupe, the easiest thing to do is to remove the outer membrane first, and this is how you do it:

How To Make Melon Balls

This is one of my other favorite ways to process a cantaloupe. I use this when I’m going to use the melon balls as a garnish, or in an appetizer. Hint: There will be a delectable recipe coming soon!

Also, the handy-dandy melon baller is one of the most used tools in my kitchen. Besides using the melon baller to make melon balls, it’s also great for removing the pits from apples, pears, and other fruits that have seeds in the middle. It’s great to de-seed cucumbers, and it helps quite a bit with clingstone peaches too. The sharp edge makes quick work of all these tasks, and is invaluable. They’re cheap too, so if you don’t have one, pick one up! I use it multiple times a week.

Unlike cubing a cantaloupe, it’s best if you leave the skin on:

With this method, you will have some scraps of perfectly fine cantaloupe. You can either eat them as they are, or blend them with some water to make an agua fresca – a low-sugar, refreshing drink that is perfect for the summertime!

So, now you know where some of your melons come from! Make sure when you buy your produce to look at that little sticker that is attached to each and every piece of produce. These melons came straight from the Joe Del Bosque Farm, and here it is in all its glory. Joe is a great, humble, knowledgeable, friendly man, and it was certainly a privilege to see his magickal place. A thousand thanks to the California Farm Water Coalition for organizing these tours. They were super informative, and right in line with my moral codes. What an experience!

Listening to:
Greenhouse Effect
Testament – Practice What You Preach 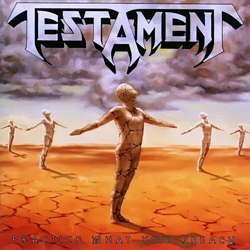 *Disclaimer: The California Farm Water Coalition paid my way up to Fresno, paid for lodging, meals, and organized all of the tours. I was not compensated in any other way for this post, and all opinions are my own.