The hubs and I are always in search of good places to eat in Southern California, and with his birthday officially upon us, we were on the hunt. We didn’t know the San Juan Capistrano area very well, so we turned to technology. If you’re a craft beer lover, you MUST download TapHunter. It helps you find craft breweries, and restaurants/bars/gastropubs that carry them.

Another great app that seems to be gaining traction in the beer community is Untappd.
This one is more of a beer review and rating system, but it can also help you locate the most popular local bars that are near you, and suggest new beers based on those you have previously rated. These two lovely gems of technology were instrumental in finding the perfect birthday lunch / dinner spot: Pizza Port Brewing Co. 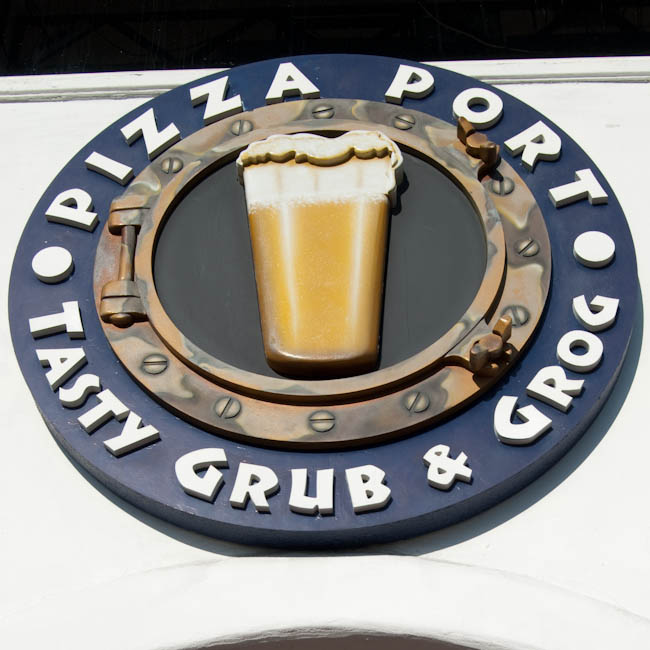 I must be honest – initially, I was skeptical. “Pizza?” I was asking myself. I wasn’t really in the mood for pizza, which was weird in an of itself, but it WAS the hubs birthday after all. We parked on their roof, which was the only parking available aside from curbing it, and entered the establishment by descending down a flight of stairs to their second level. Complete with a bar, flat-screen TV’s, and long picnic tables lining the walls, we were also greeted by a fantastic staircase! 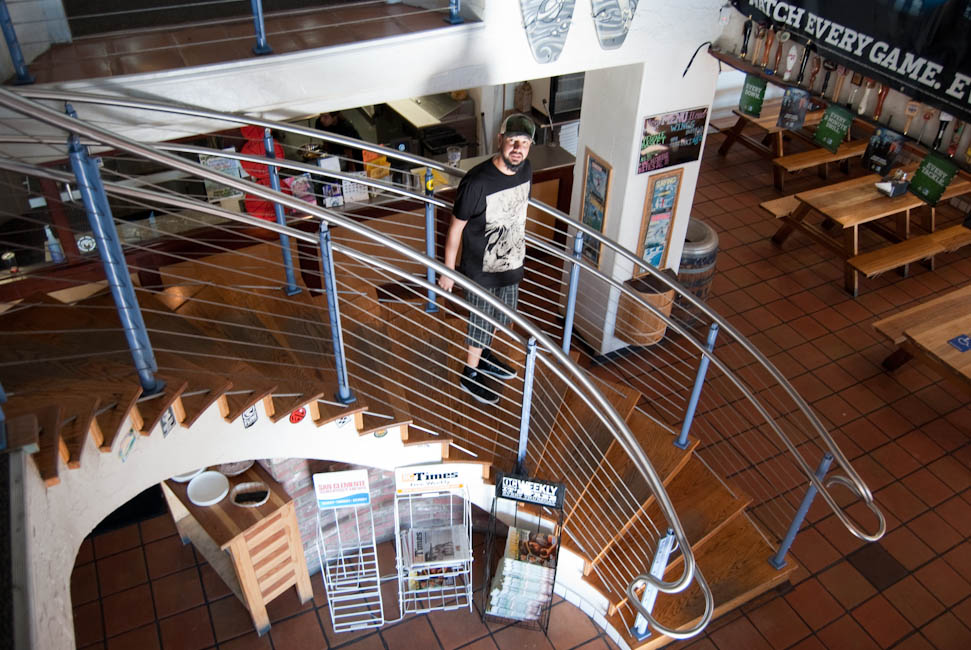 The industrial-esque spiral staircase takes you down to the first level where you’ll find more picnic tables, a pizza ordering station, and a separate area where their fermentation tanks sit pretty behind their main bar. 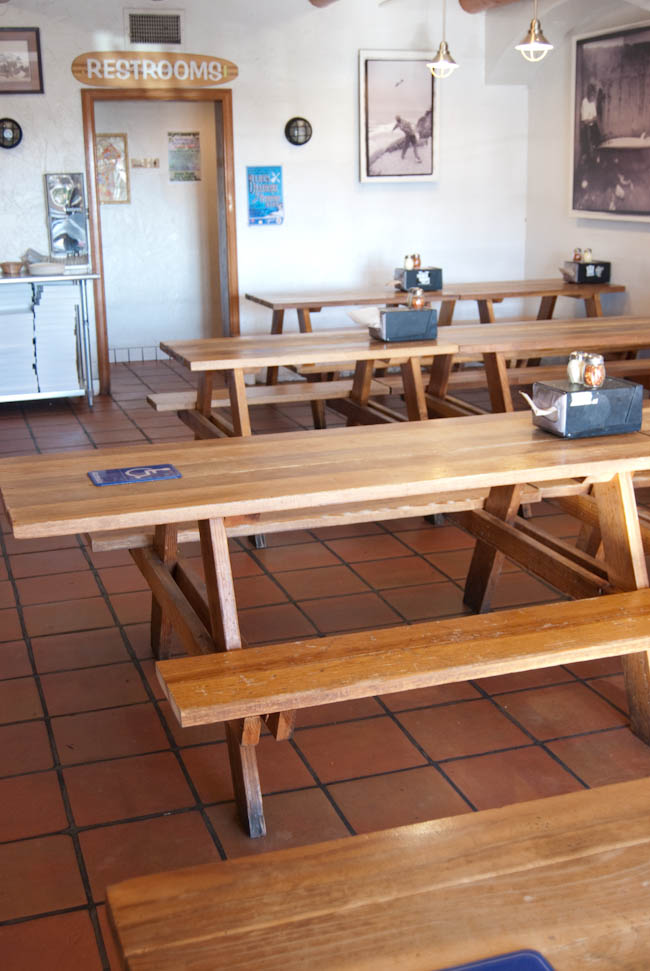 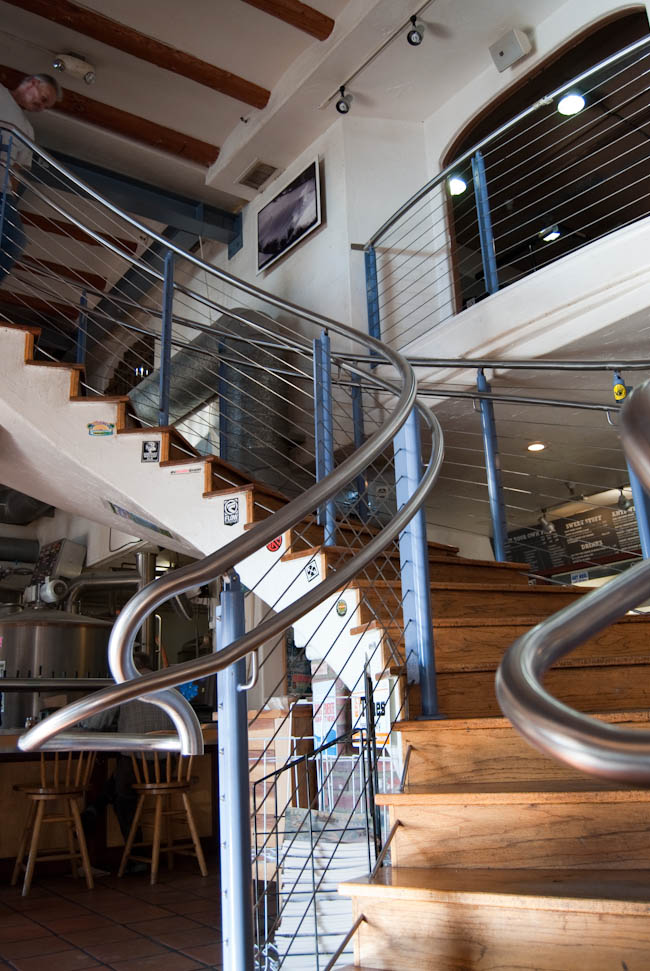 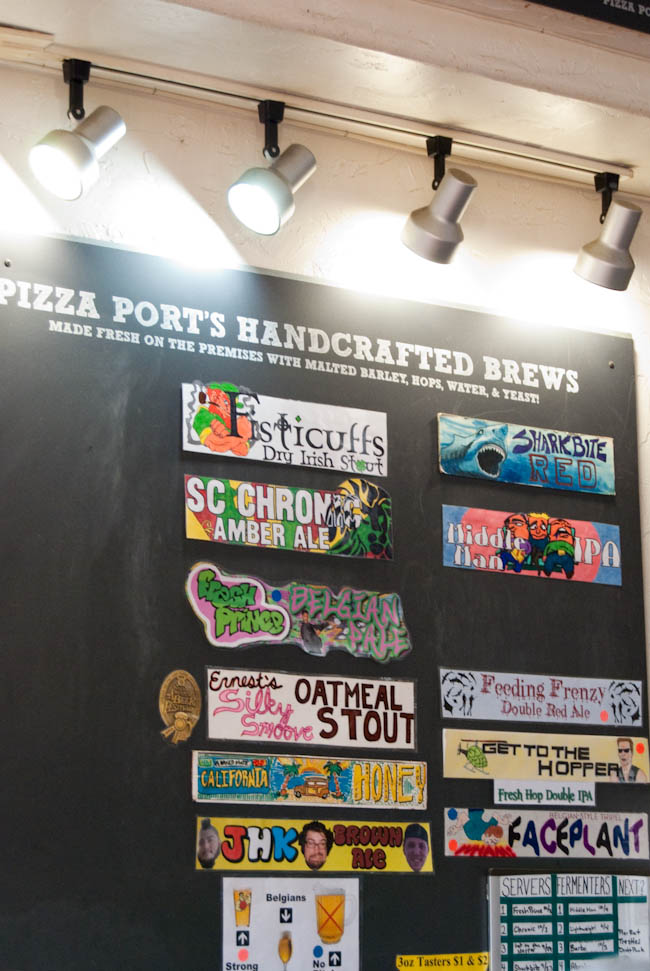 After ordering, we were drawn outside where there was enclosed seating with new, shiny wood pub counters, and a spectacular view of the ocean. 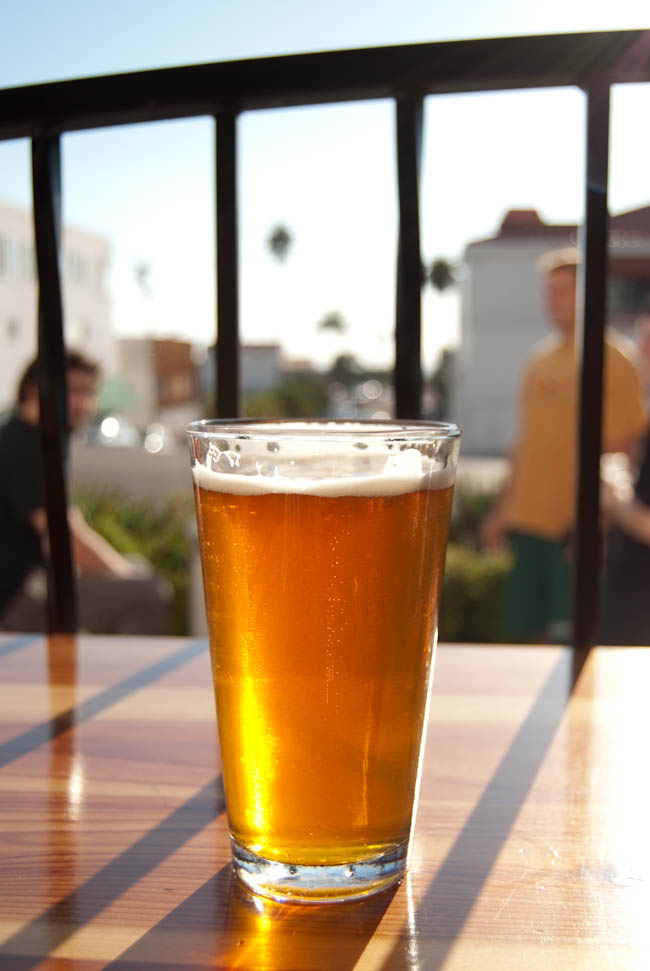 Then we started to dig in, and realized that this place was quality. I had Get To The Hopper – an Imperial / Double IPA, which was extremely hoppy, yet well balanced and light. Hubs had their Middle Man IPA – an American IPA that is hoppy, with hints of grapefruit. 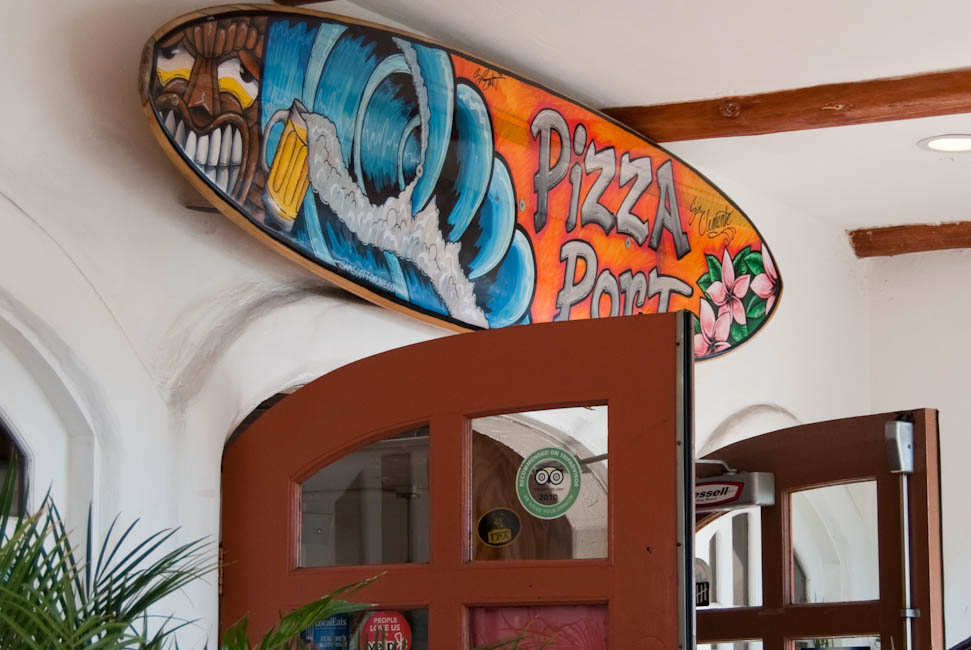 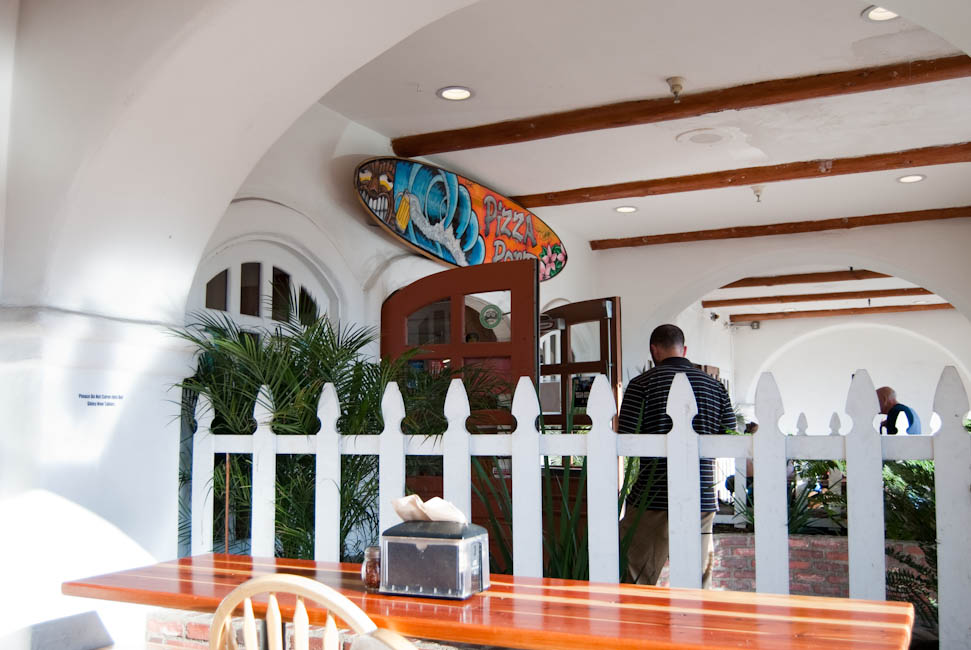 Both were very awesome beers, and come highly recommended! If you love IPA’s like we do, they will not disappoint. After diving into those delicious beers, the Ocean Beach Pizza we ordered was ready with its whole grain beer crust. 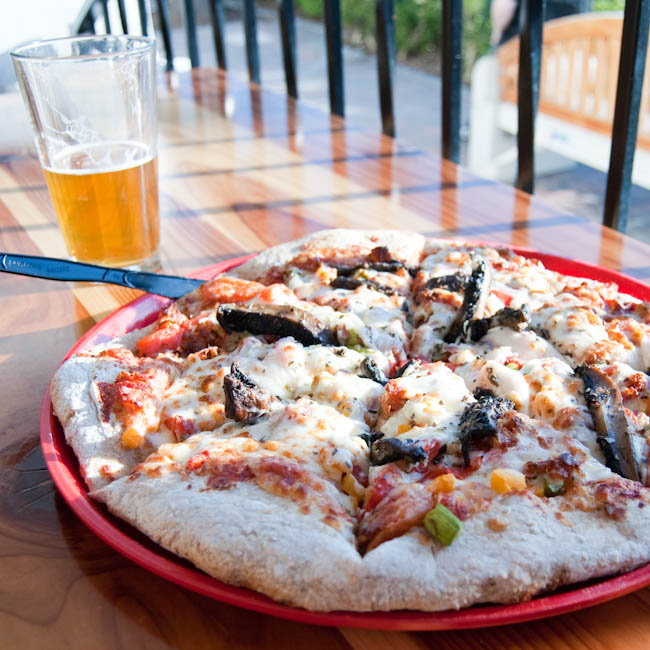 The crust was slightly dense, but the crispiness on the outside, and beautiful chewiness on the inside made up for it. The butternut squash and asparagus deviated from ‘normal’ toppings than what we were used to, but added a pleasantly unexpected crunch and flavor. Portabello mushrooms, roasted red peppers, mozzarella, gorgonzola and house made bacon composed the rest of the pizza, and sent us straight to pizza heaven. The only down-side was that the house made bacon could have been more prevalent – I saw it but couldn’t taste it. Aside from the lack of bacon, the birthday boy proclaimed it’s the best pizza he’s ever eaten!! What?! Yes, it was that good. 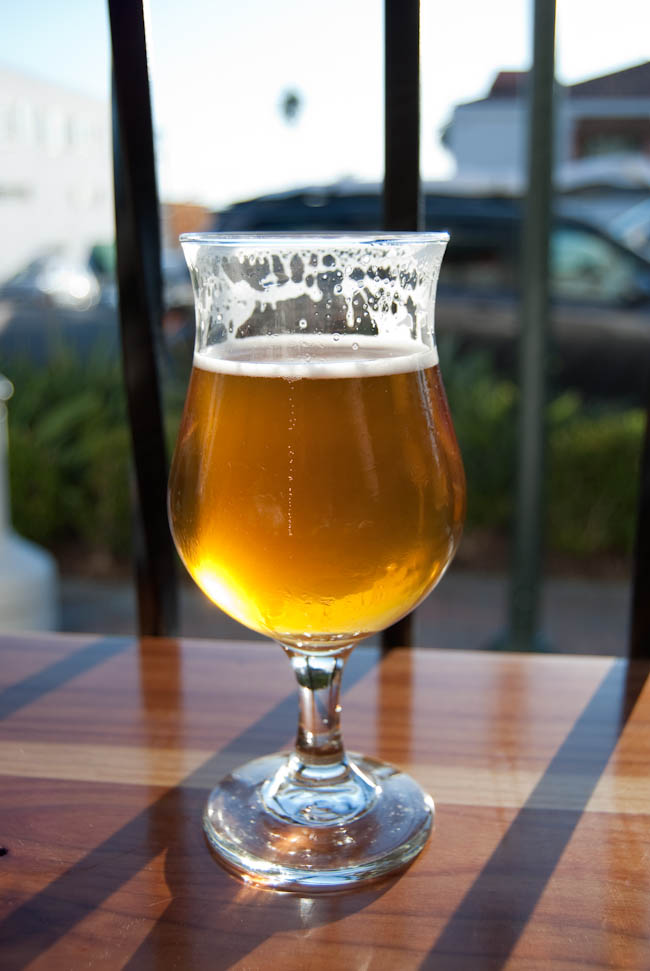 We finished our visit with Fresh Prince – a fresh hopped Belgian Pale, and Feeding Frenzy – a Imperial / Double Red Ale. Pizza Port Brewing just does not make a bad beer! The Fresh Prince felt like a classic Belgian, only hoppier, with hints of melon. I didn’t try the Feeding Frenzy, but the hubs wasn’t too impressed with it. Then again, we’re more fond of IPA’s so, you might like it if double reds are your thing.

Overall, we think this place is great, and worth a trip out if you are ever in the area. They even won at the Great American Beer Festival 2012 for their Scotch Ale titled Way Heavy. The place could use a little elbow grease in areas, but the beers are good, the pizza is damn good, and the view and ambiance are out of this world.