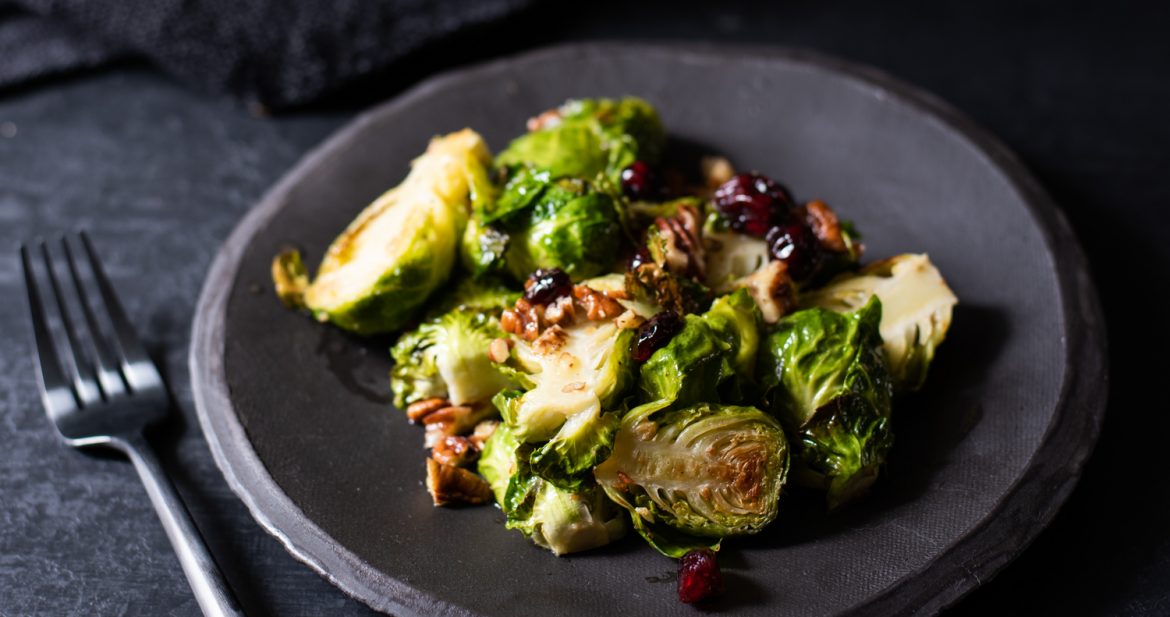 *DISCLAIMER: This post contains affiliate links with Amazon. If you click any of the product links, I get a portion of the proceeds of any purchase at no cost to you. Thank you for your continued support! It helps keep The Devil Wears Parsley around, and I love being here rockin’ with you! All opinions and thoughts are my own..

What an under-utilized gem of vegetation! The Brussels Sprout is one of the 50 best plants on the planet according to Cathy Thomas’ book The 50 Best Plants on the Planet, and is also mentioned as one of the best veggies for a beautiful body in Kimberly Snyder’s The Beauty Detox Foods. It’s a cruciferous vegetable meaning that it belongs to the cabbage family, and is loaded with A, C, and E vitamins as well as manganese, helping the body fight toxicity, move well, and contribute to skin and eye health. They also contain antioxidant polyphenols that battle free radicals in the body, helping to combat cancer, and can help lower cholesterol too. You can read more about their nutritional properties, and how they affect the body in those two books above – I could go on all day! If you don’t have these books in your arsenal, you should. They definitely motivate me to eat more of my leafy green veggies! 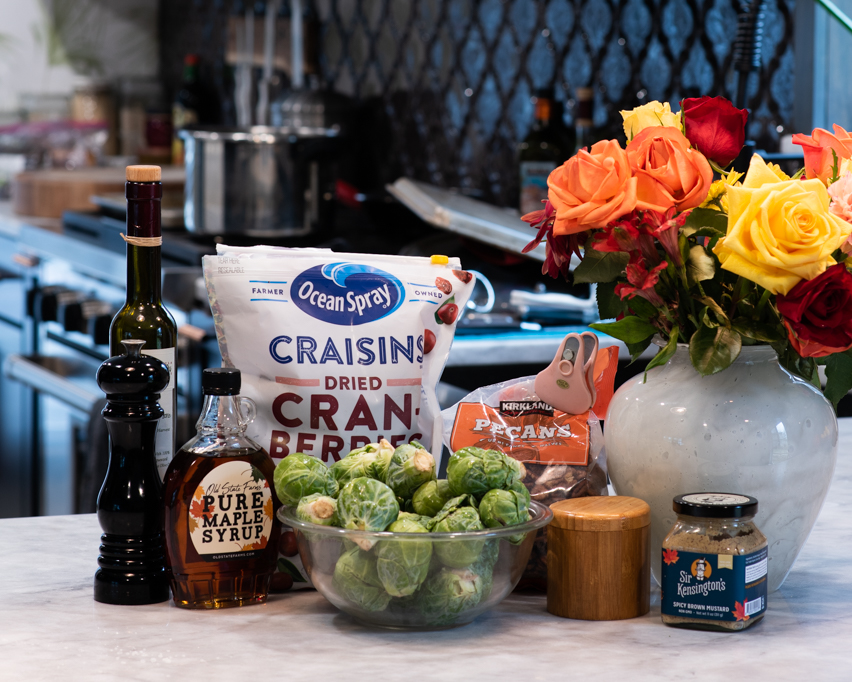 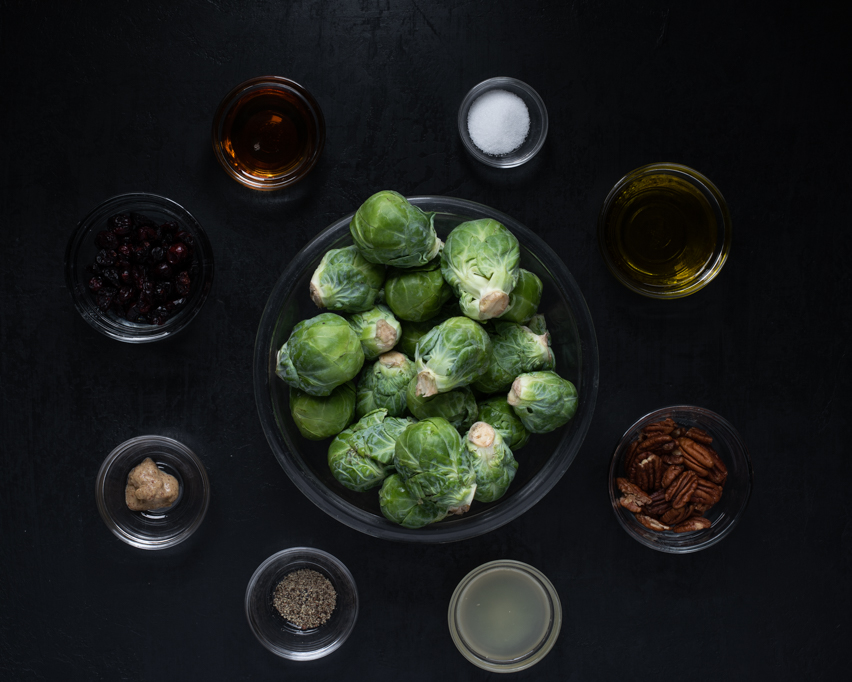 I have some not-so-fond memories of Brussels Sprouts as a kid. They’d be boiled in water for too long, tossed in butter and salt, and that was it. They’d be falling apart, and smell like… that other 4 letter word that starts with F. Very sulfuric, shall we say? The problem is over-cooking. But I’m going to show you a hack that will produce amazing sprouts every time, no matter how you dress them in the end. First, to store your Brussels sprouts, don’t wash them until you’re ready to use them. Find tight heads, and if possible, select a uniform size, so they cook evenly. They’ll keep for up to 10 days in the refrigerator. When you’re ready to cook them, rinse well under running water. 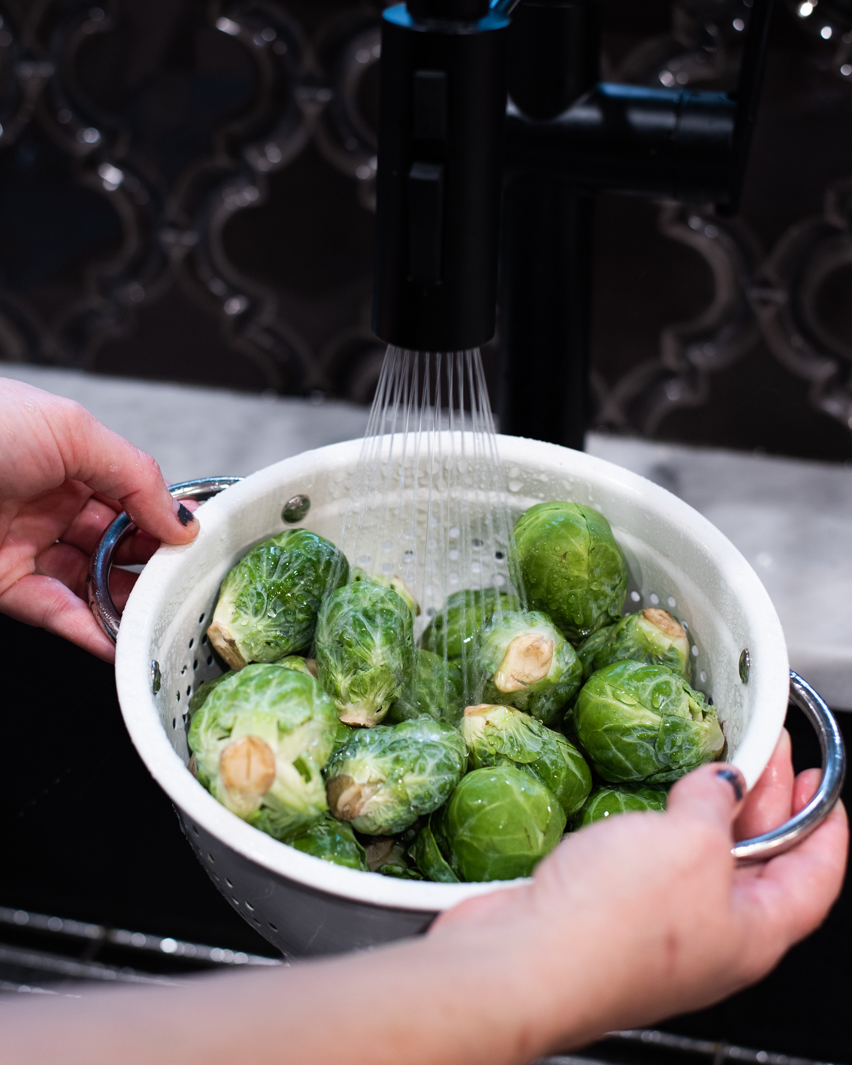 Next, the process involves shaving off the end of the sprout if they’re a bit brown. You can see that mine here are slightly brown, so I’m shaving them off. Keep a little bowl handy to collect them as you go, and put in the compost pail when you’re done. Then, halve them. You can also quarter them if they’re really big heads. Just be sure to halve them such that you keep the core in-tact, as that’s how the leaves are attached. 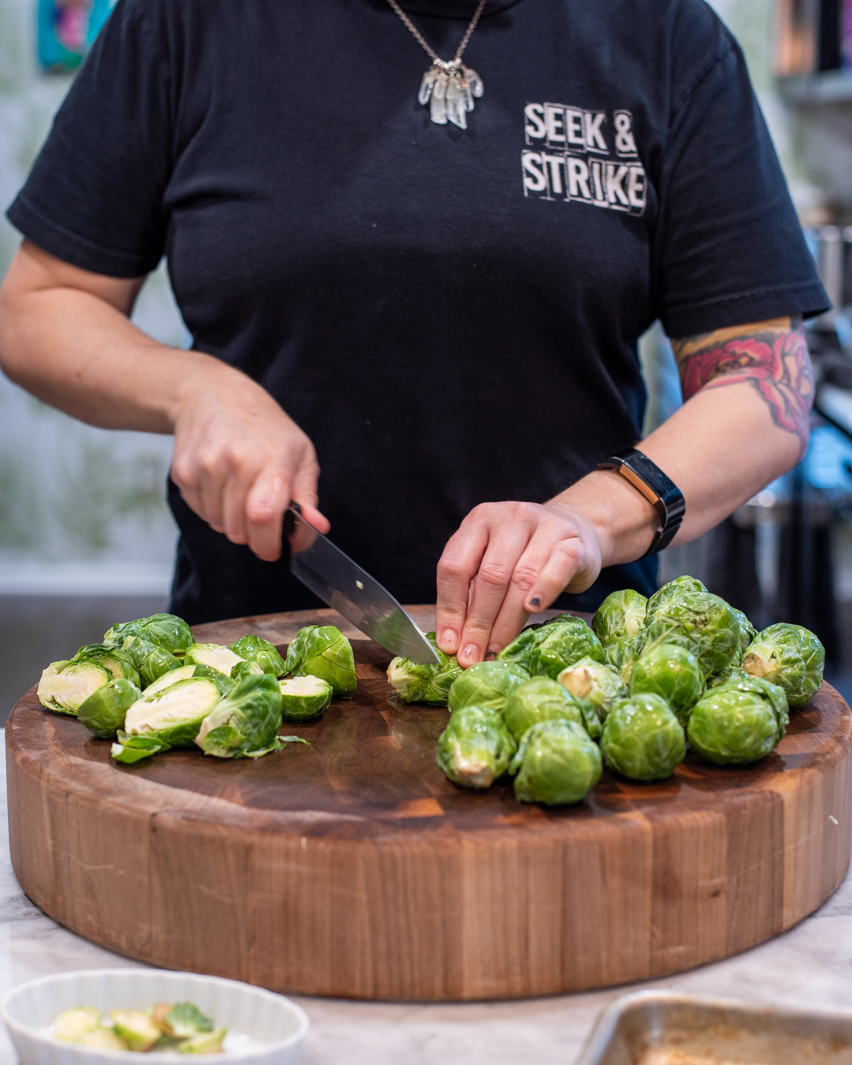 This is by far the most fun method I’ve found for cooking a lot of Brussels Sprouts at once. First, and before you’ve started washing them even, pre-heat the oven to 425°F. Second, spray a half sheet pan with a good coating of olive oil – about 1 tablespoon total. Third, spread the Brussels sprouts cut-side-down on the sheet pan, and season with salt. This gets the most surface area of the Brussels sprout hitting that sheet pan, which will effectively give you a good “sear” on the cut side, and roast the Brussels sprouts nicely. 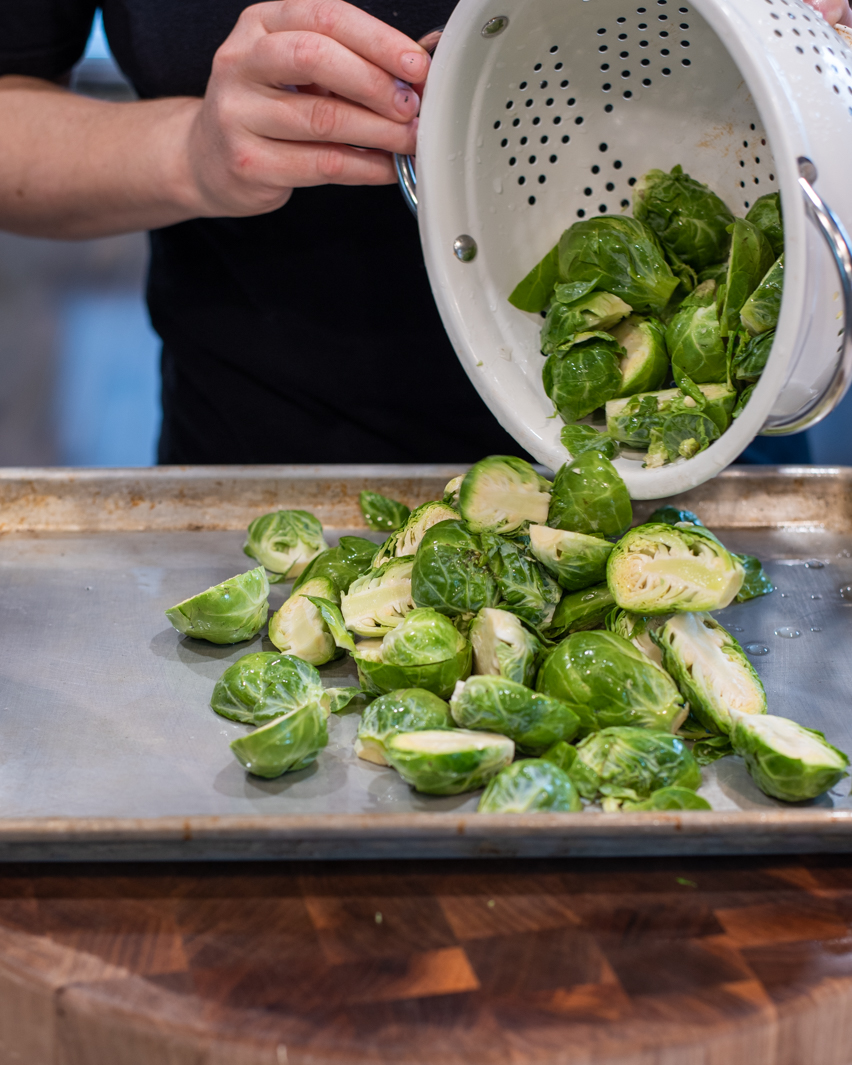 We roast them at 425°F, which is a high-heat for most vegetables, but the reason for this is two-fold. The first is to heat up that metal sheet pan enough to get a good sear on the bottom. Sometimes I’ll even pre-heat the pan in the oven, so it’s hot when the Brussels sprouts are added. Second, it provides enough heat to also do the roasting, so the Brussels sprout cooks thoroughly to fork tender, in a short amount of time. 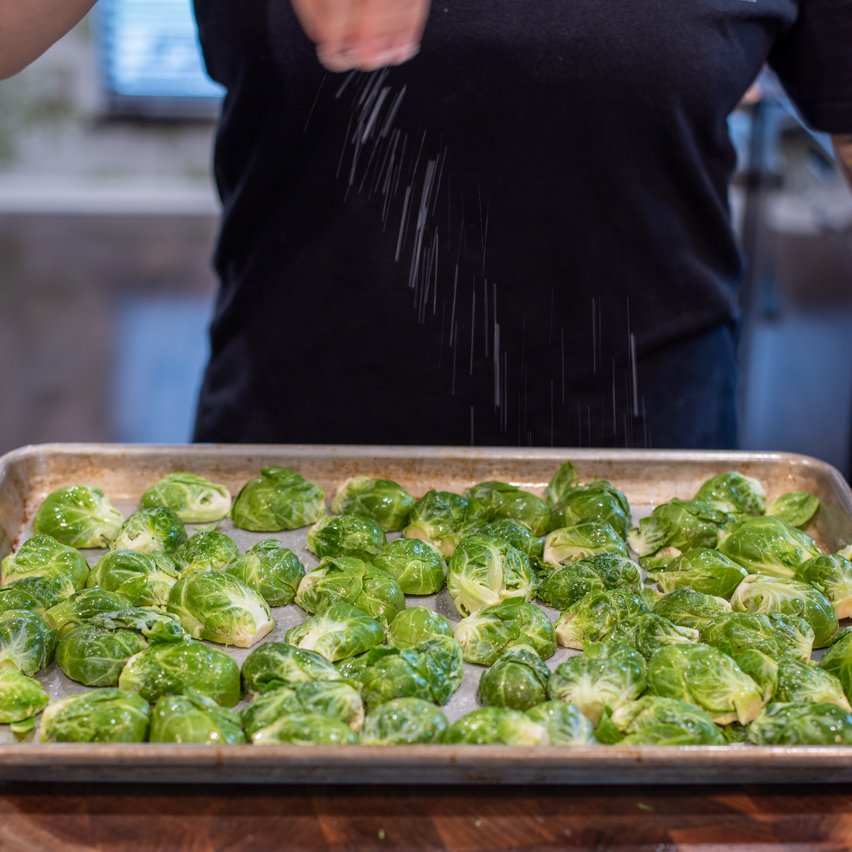 Let’s Get Dressed Up!

It’s not a party until we get all dressed up! I call this a Christmas/Yule recipe not only because it’s a formidable side dish on the Christmas dinner table, but also because it’ just looks like Christmas. Green Brussels sprouts & red cranberries, and a little bit of rich, brown pecans all mimic the colors of the season. But we’re also talking about the sweet and pungent dressing that also accompanies the cast of characters – a maple mustard viniagrette. It may seem odd to marry sweet maple syrup to a grainy, pungent mustard and sour lemon juice, but those flavors make an amazing dressing together, that helps balance out this dish like no other. 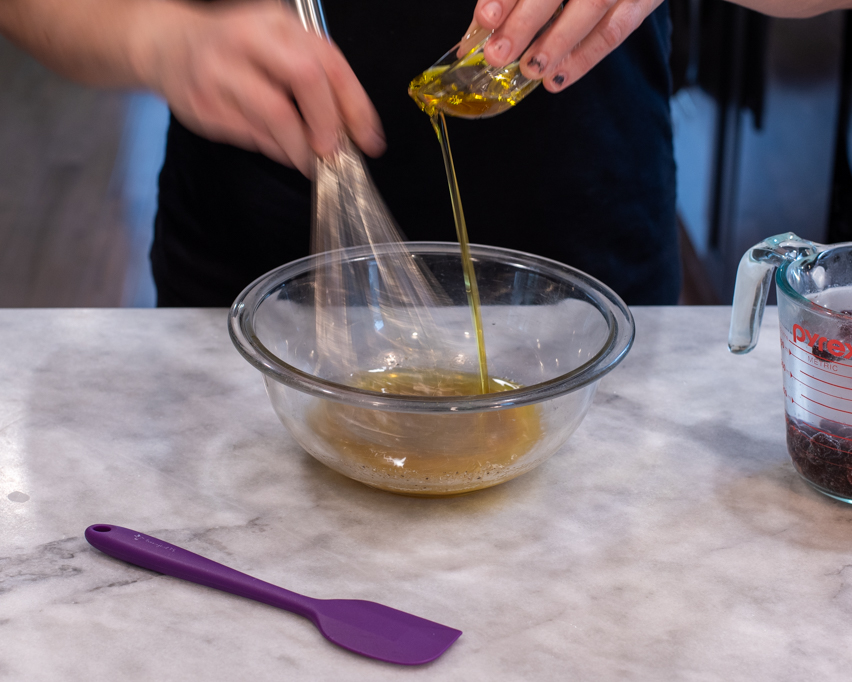 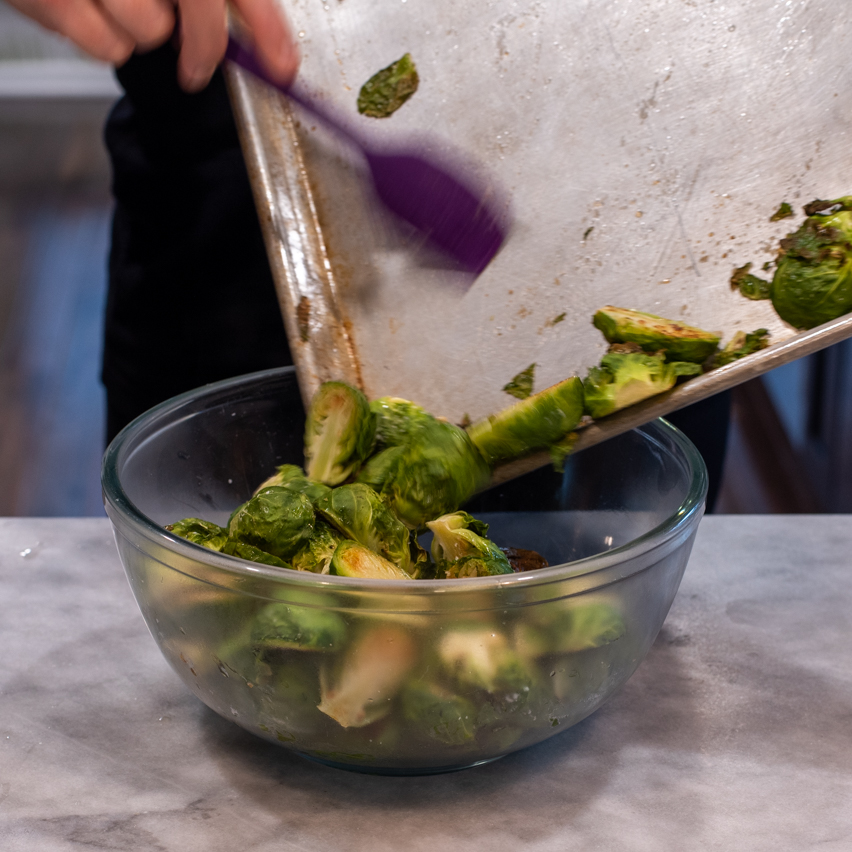 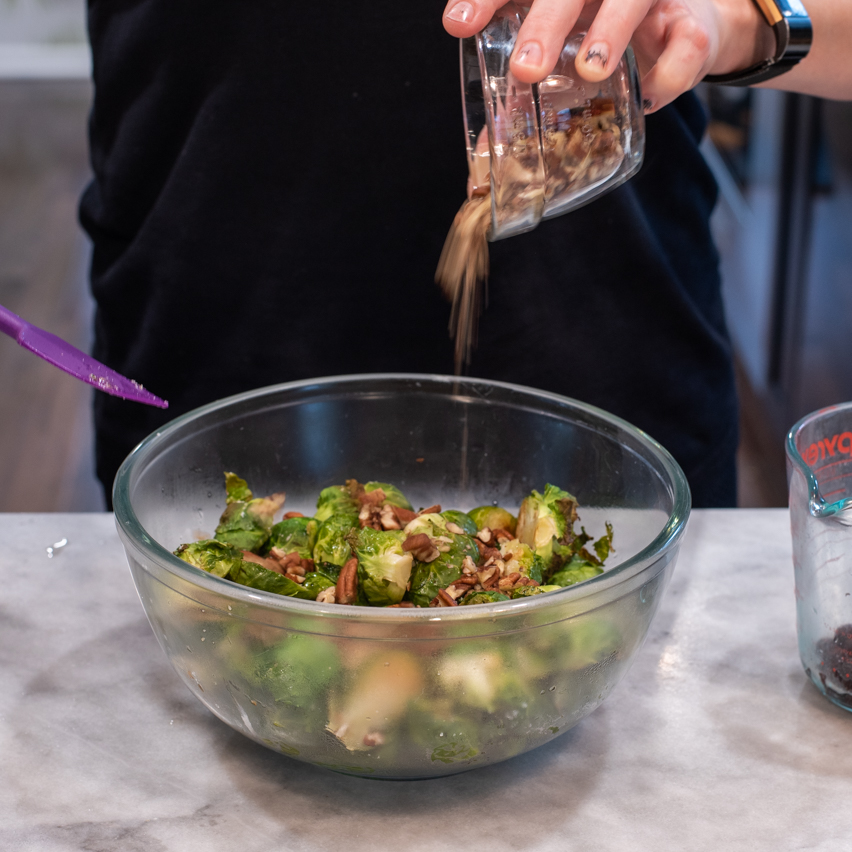 Building The Dish + Other Nuances

Basically you throw everything in a bowl, and toss after you’ve made your dressing. One honorable mention that elevates this dish is re-constituting the cranberries in hot water. Cranberries as they are, are delightful, chewy, sweet and tart, however in that state, they can get stuck in your teeth. To avoid that just a teeny bit, while allowing absolute and complete enjoyment of this dish, boil some water, and add your cranberries first thing – at the stage where you pre-heat your oven. You want to soak them so that they take on a little bit of water, and become slightly more tender and warm. When you’re ready to toss everything together, drain them, and add them to the party. 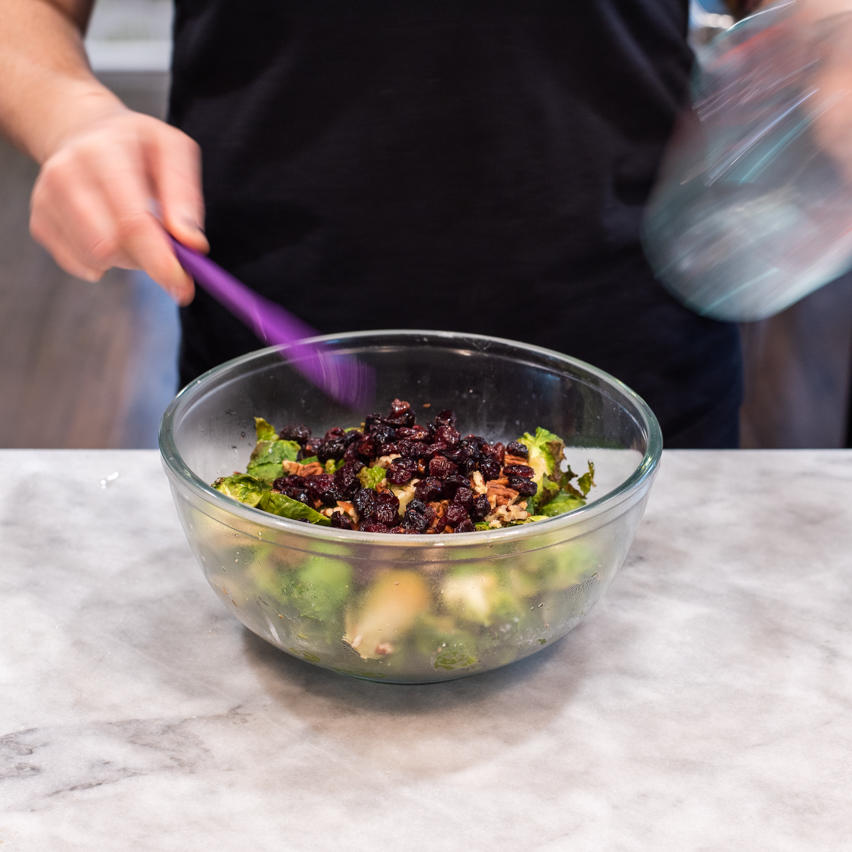 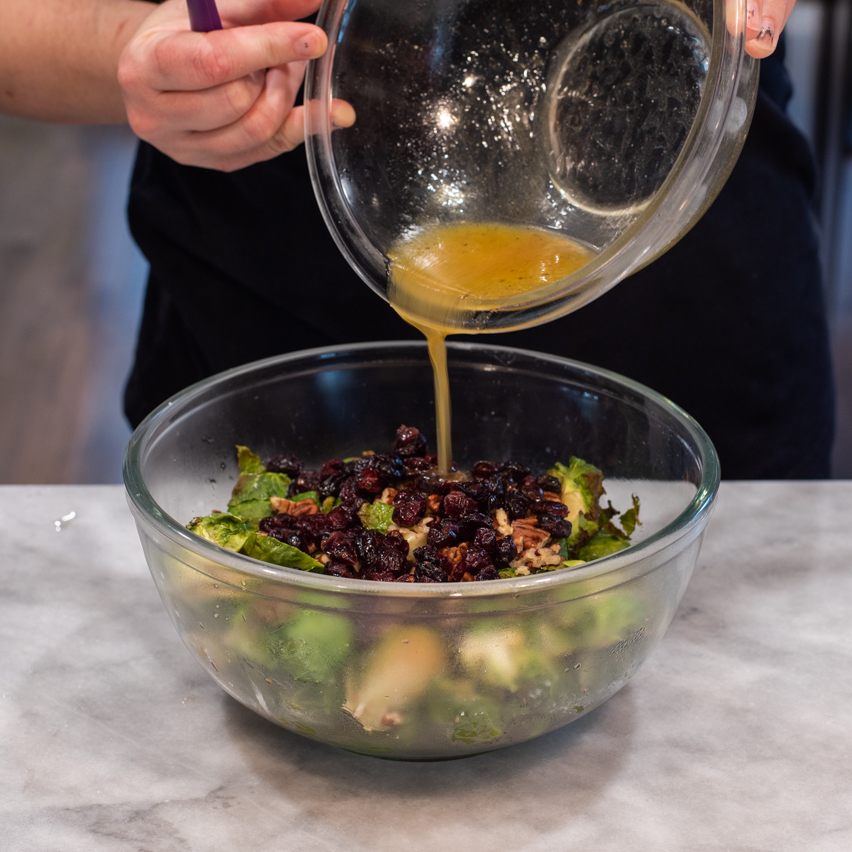 The Perfect Side Dish

There you have it! Serve this as a side dish at your holiday table, or as we are doing it here at Casa de Orozco, having it as a veggie side with our dinners this week (it goes great with baked sweet potato)! 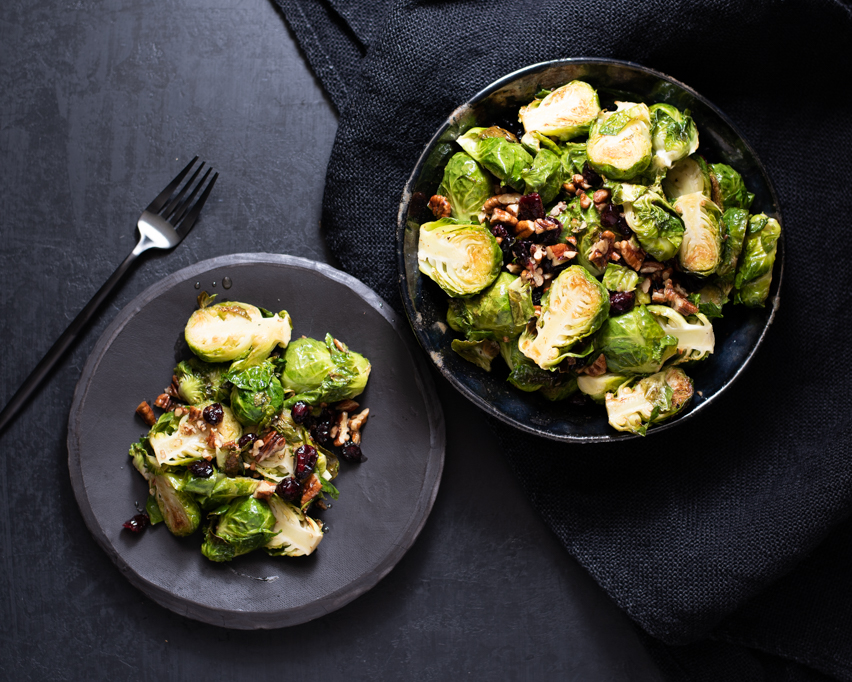 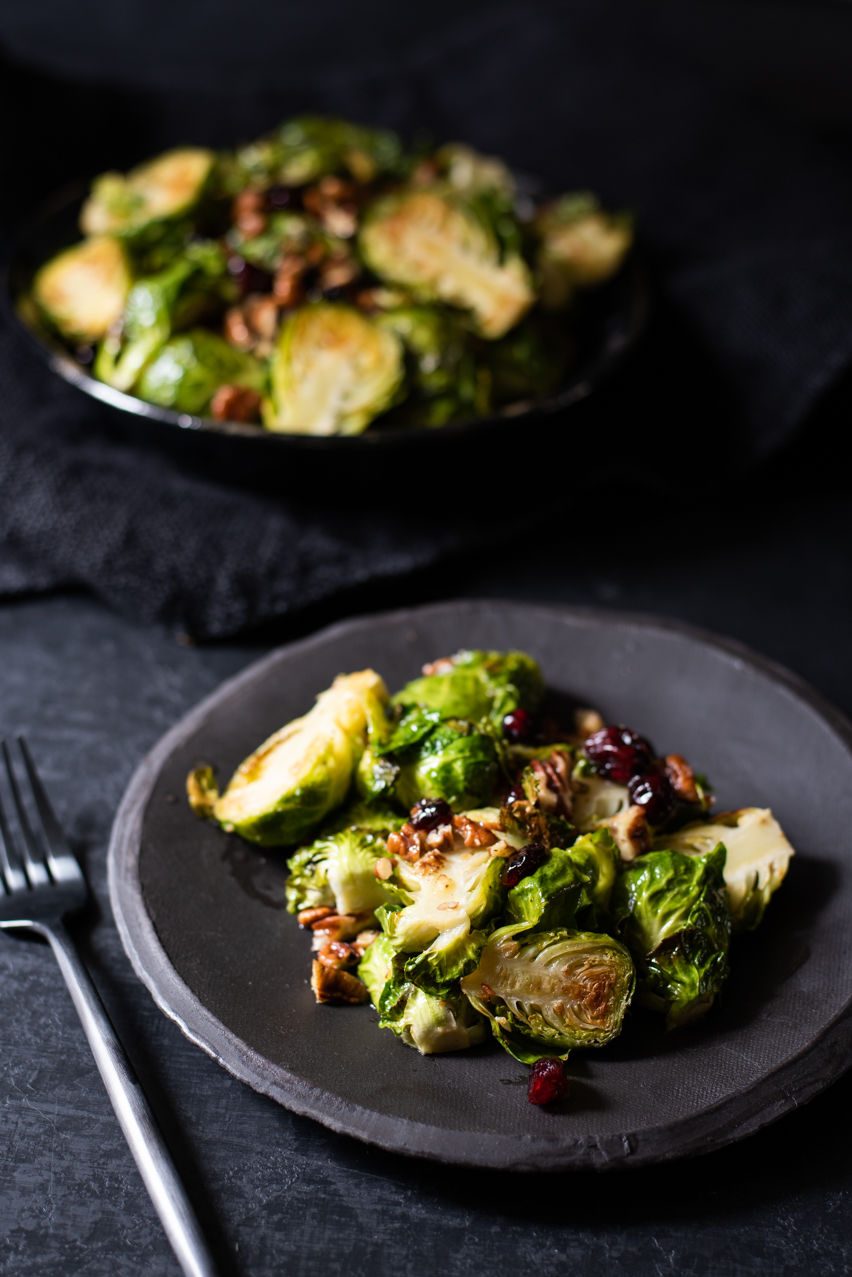 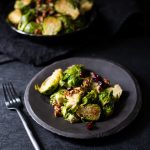 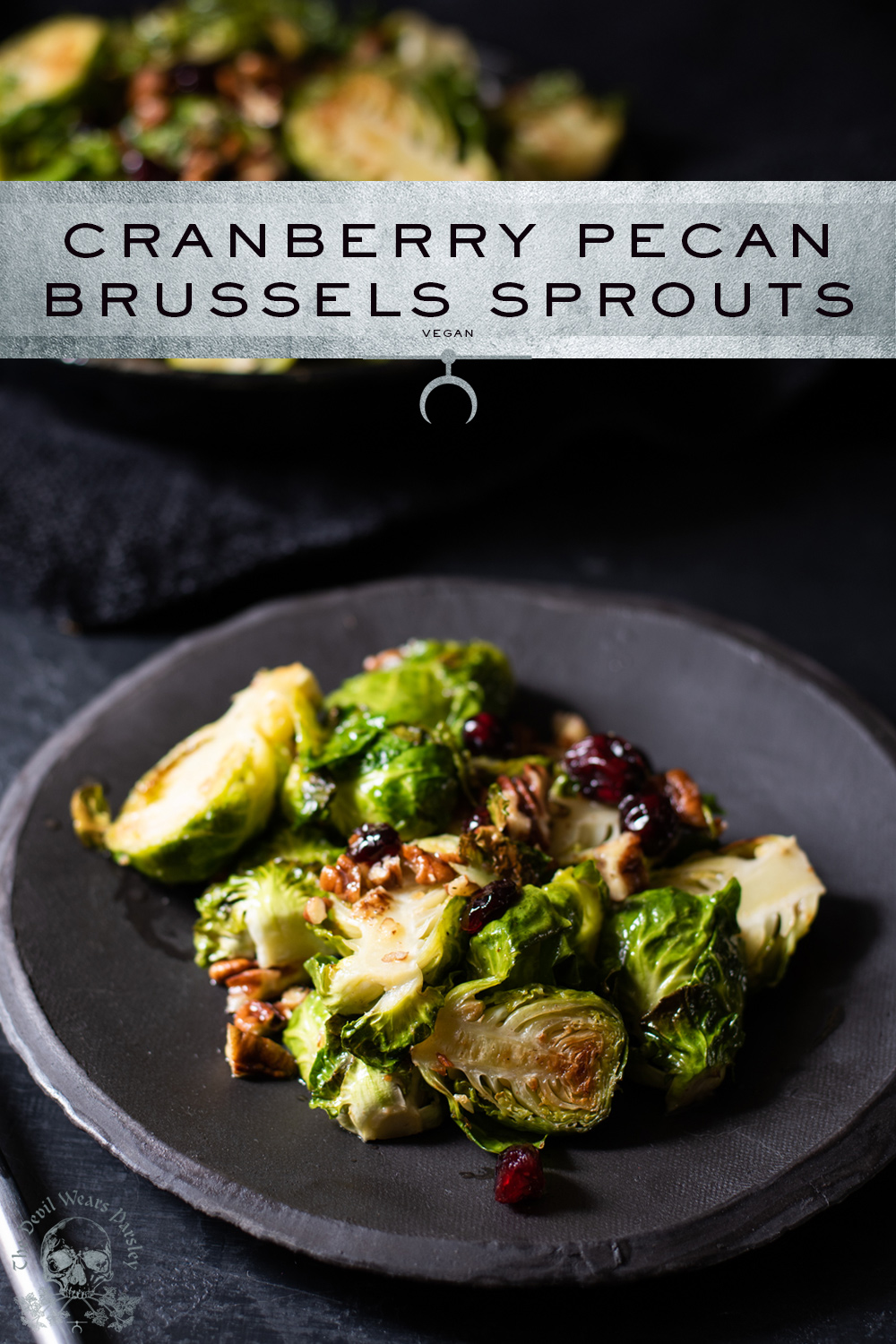